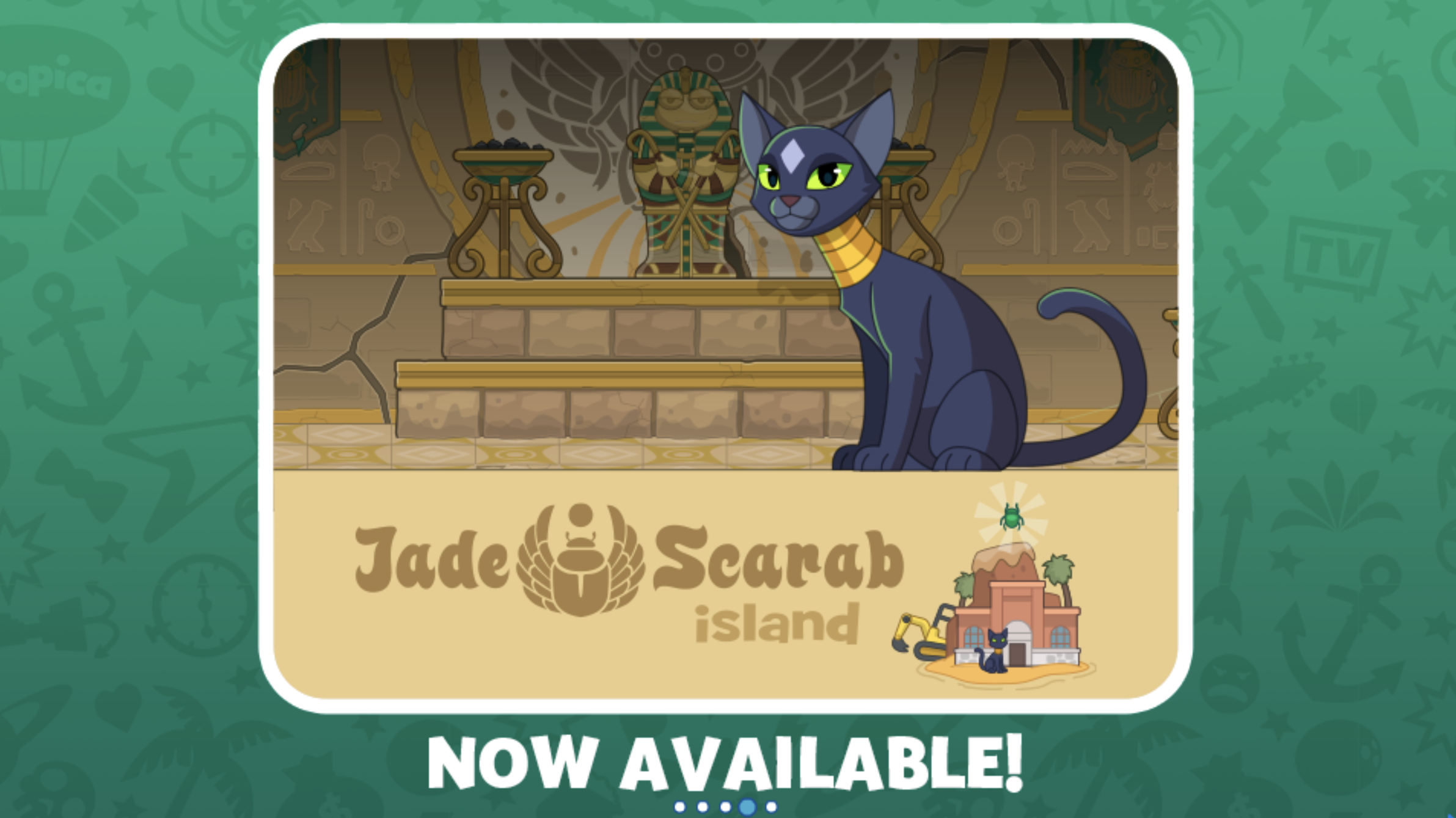 Begin your adventure on Jade Scarab Island! Walk down Mainstreet and pass the Museum of Really Old Things, where the museum’s curator will call you over. She needs your adventuring abilities! In order to finish the exhibit, someone must find out what happened to the Jade Scarab expedition. Accept the quest and follow the curator inside. 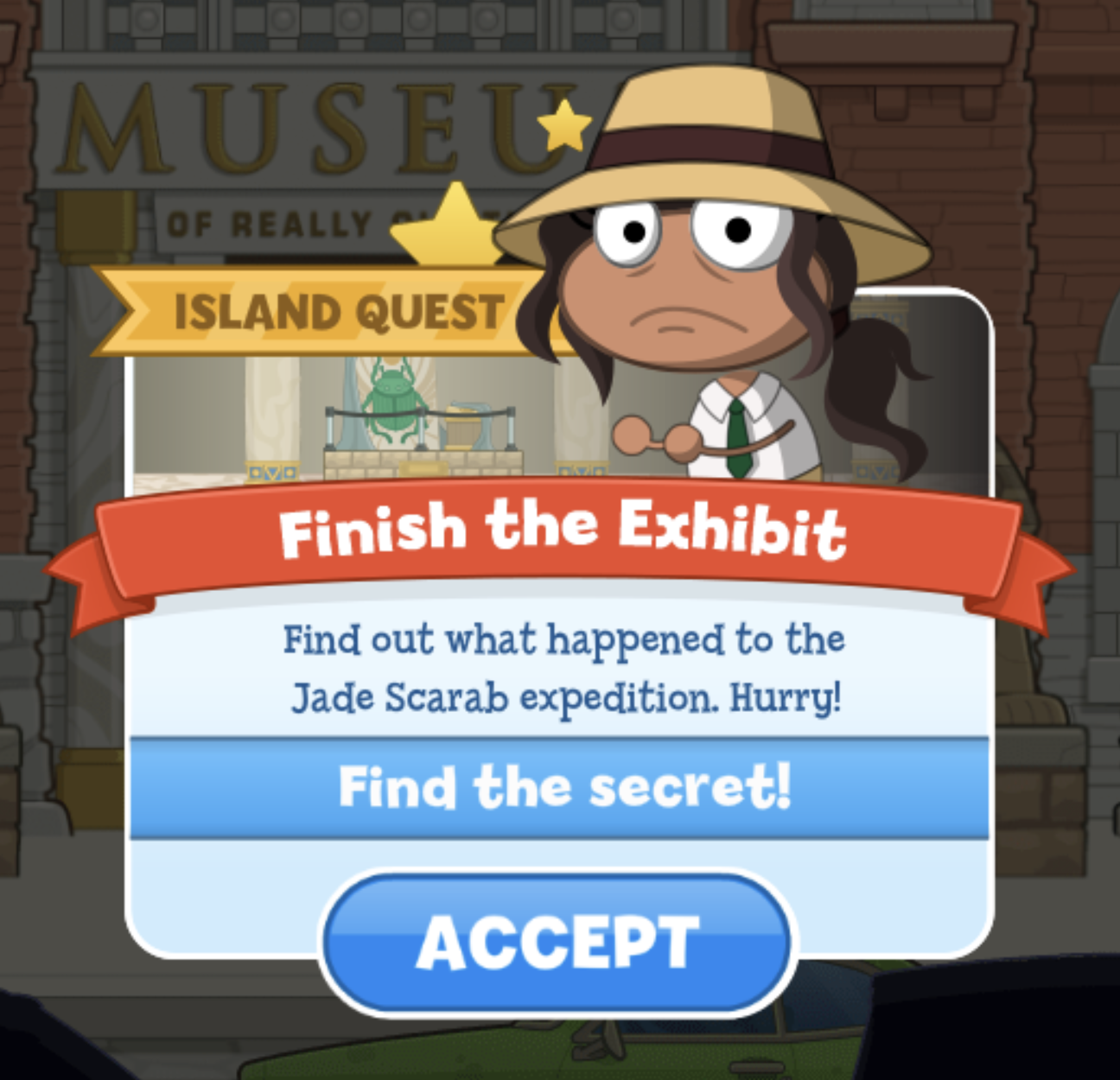 Apparently, none of the other none of the artifacts have arrived from the site. Even worse, there’s no contact between the excavation crew and museum. Because you’re not an archaeologist, your job is to find out what’s happening at the site. Hitch a ride with the curator’s brother, Bes, to the village.

After the car ride you'll find yourself in the village near the dig site. Bes hints that the villagers always return the favor, before instructing you to find Howard Diggory, the expedition’s leader. Make your way through the town to find the excavation crew and chat with the locals to find out what they know.

The villagers are spooked, fearful of the catastrophes brought on by the excavation. The locals share rumors about a curse plaguing the site. Locusts have appeared, destroying crops, the animals have gone haywire, and tourists are keeping their distance – they don’t want anything to do with the curse.

At the bottom of the village, Howard Diggory is waiting at the dig site. He details the expedition’s troubles – the excavation site is flooded, the digger and the tow truck are stuck, AND the spare machinery is lost in the desert. Everything that can go wrong, has gone wrong.

Explore the excavation area and swim past the tomb entrance. First things first, you’ll have to take care of the flooding. 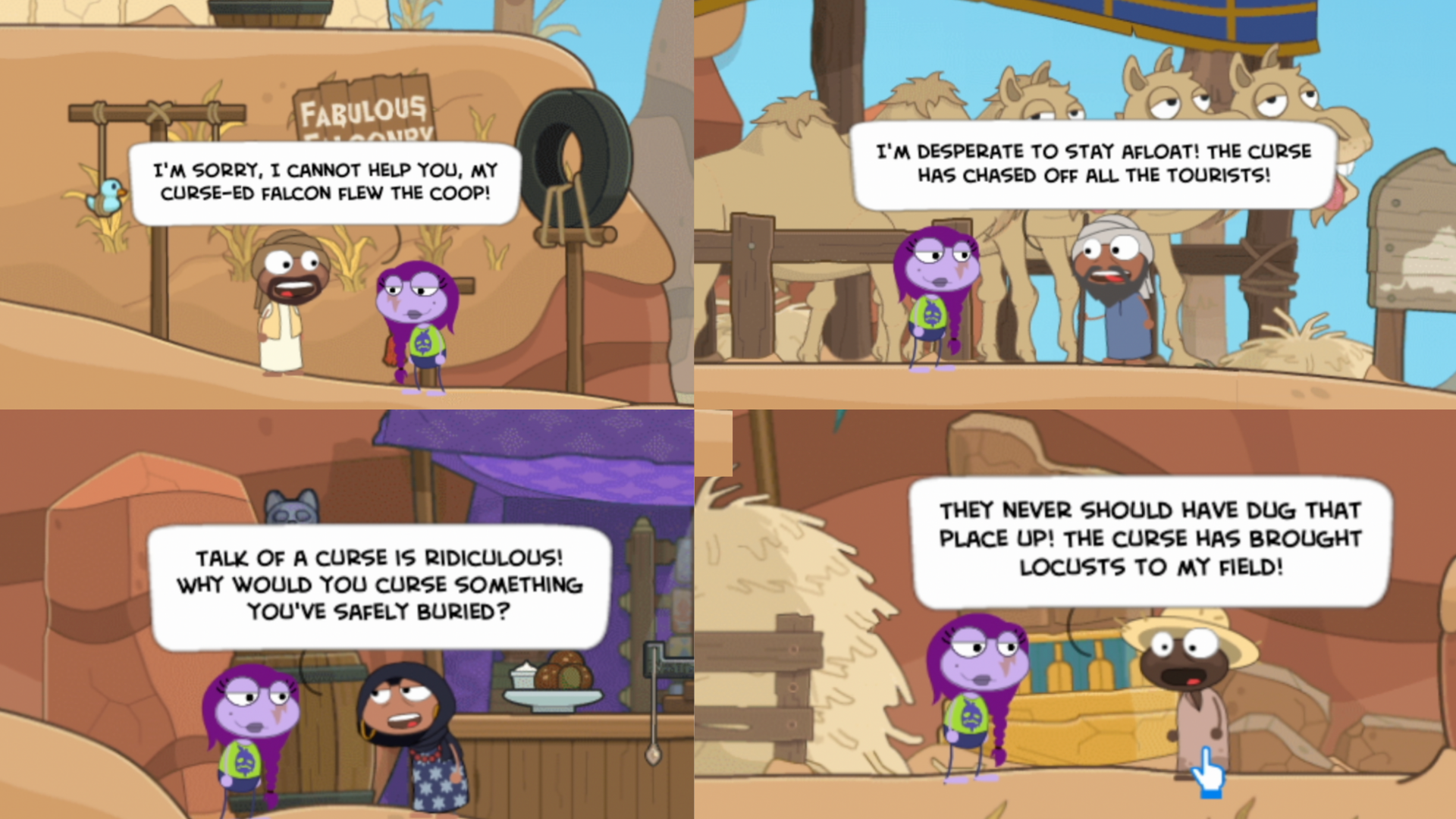 Speak to the remaining locals to get all the information you can! An old merchant is selling ancient wares. It doesn’t look like she has anything we can use (yet), but she’s able to fill us in on the lore surrounding the Jade Scarab. The Scarab was given to the pharaoh long ago by the gods it brought great bounties to the villagers’ ancestors. She isn’t convinced the curse is real though, because “why would you curse something you’ve safely buried?”

Finally, stop in front of the camel herder on the right end of the village. The animals look so thirsty! The herder is offering camel tours for 9999 credits (over 9000)! Without the tourists, he can barely afford water for his camels. But there’s one person that might be interested… 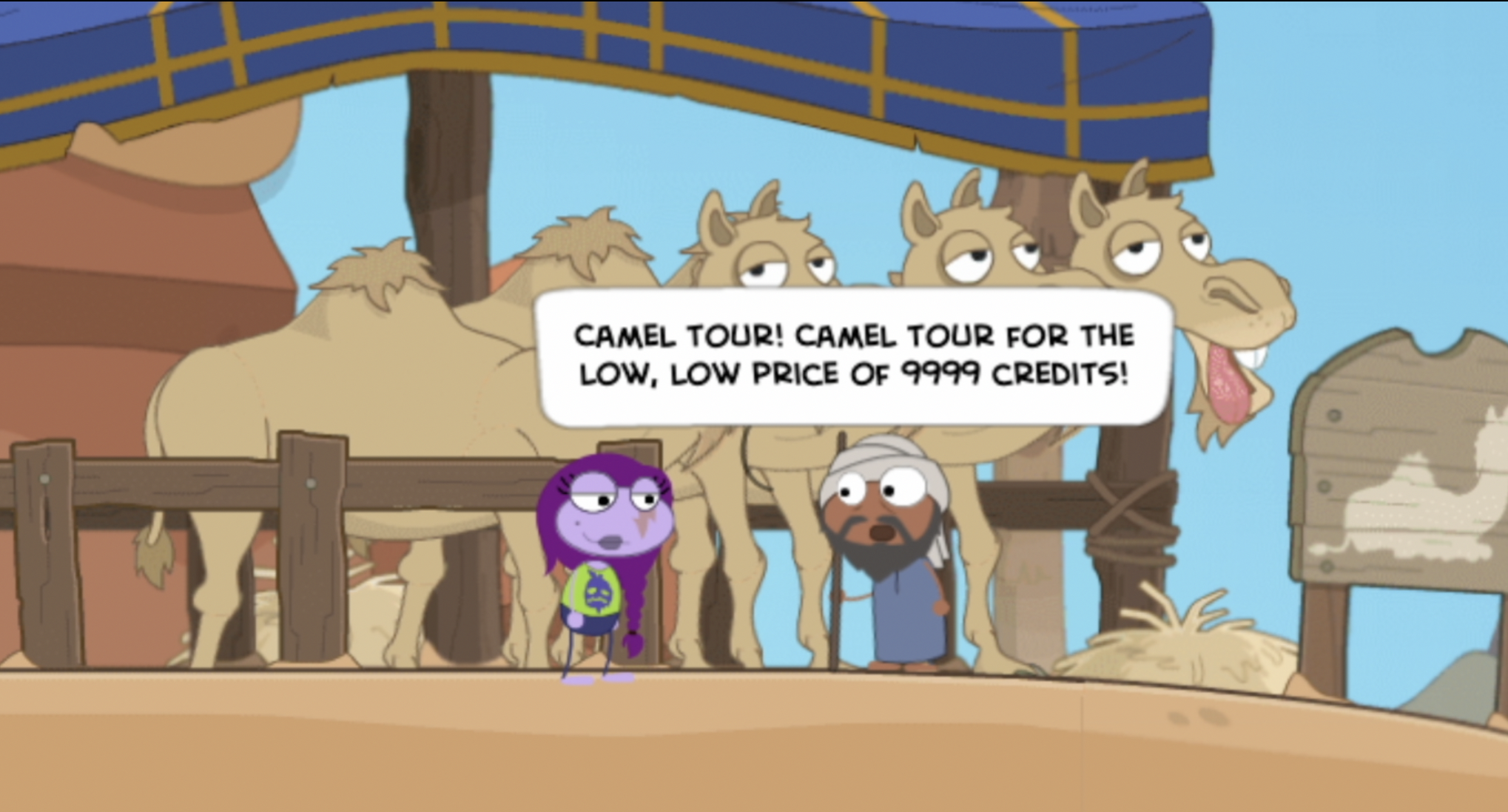 Make your way back to the museum with Bes to find the camel enthusiast we spotted earlier. Pitch him the herder’s deal to see the camels up close and personal. He’d pay top dollar to see the creatures. 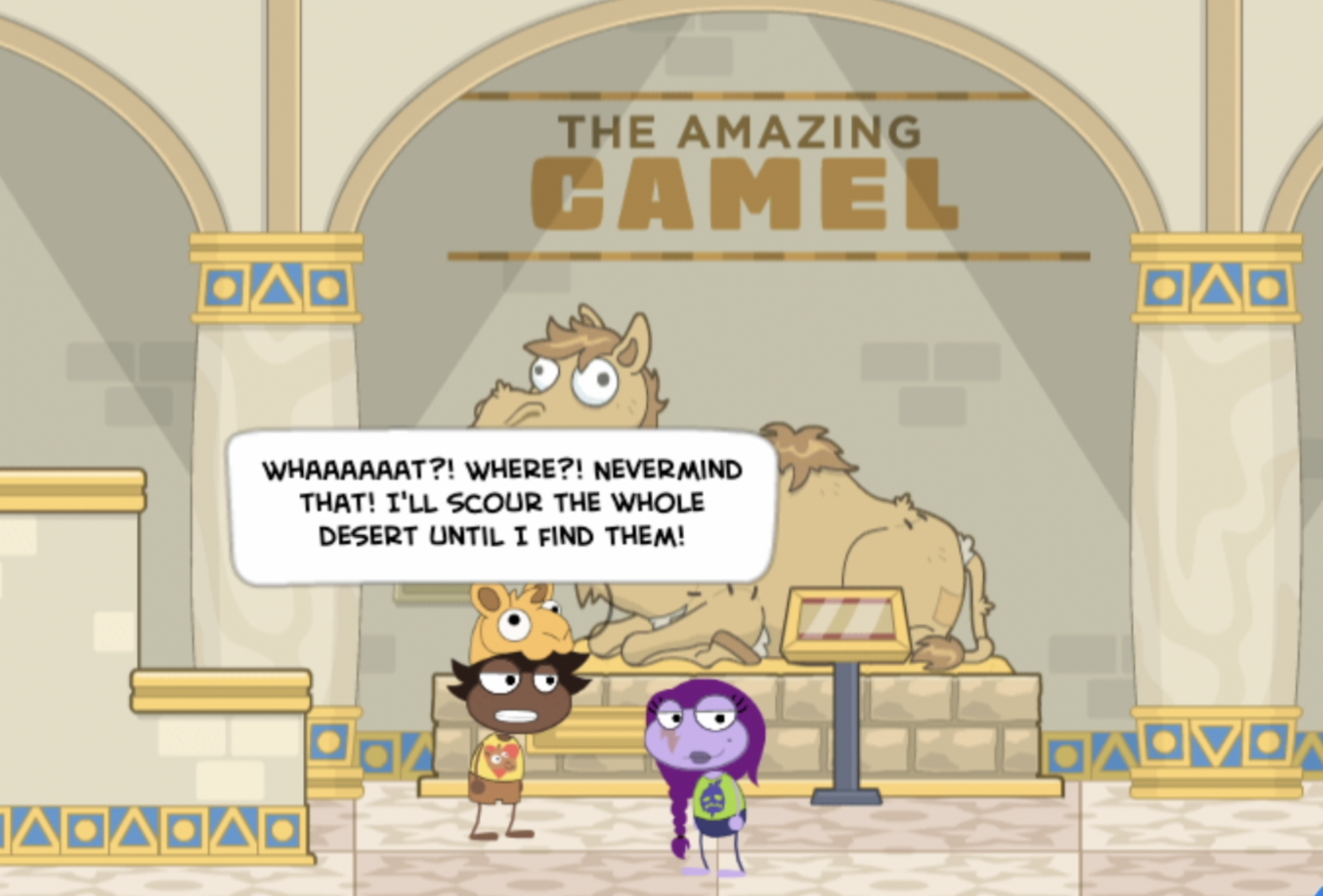 Climb back into Bes’ car and return to the village. Find the museum goer we just met, who has already beat you to the village. After paying the 9999 credits, the camels are set free! They’ll run down the hill to drink every drop of water from the flooded area. Now we can enter the site! 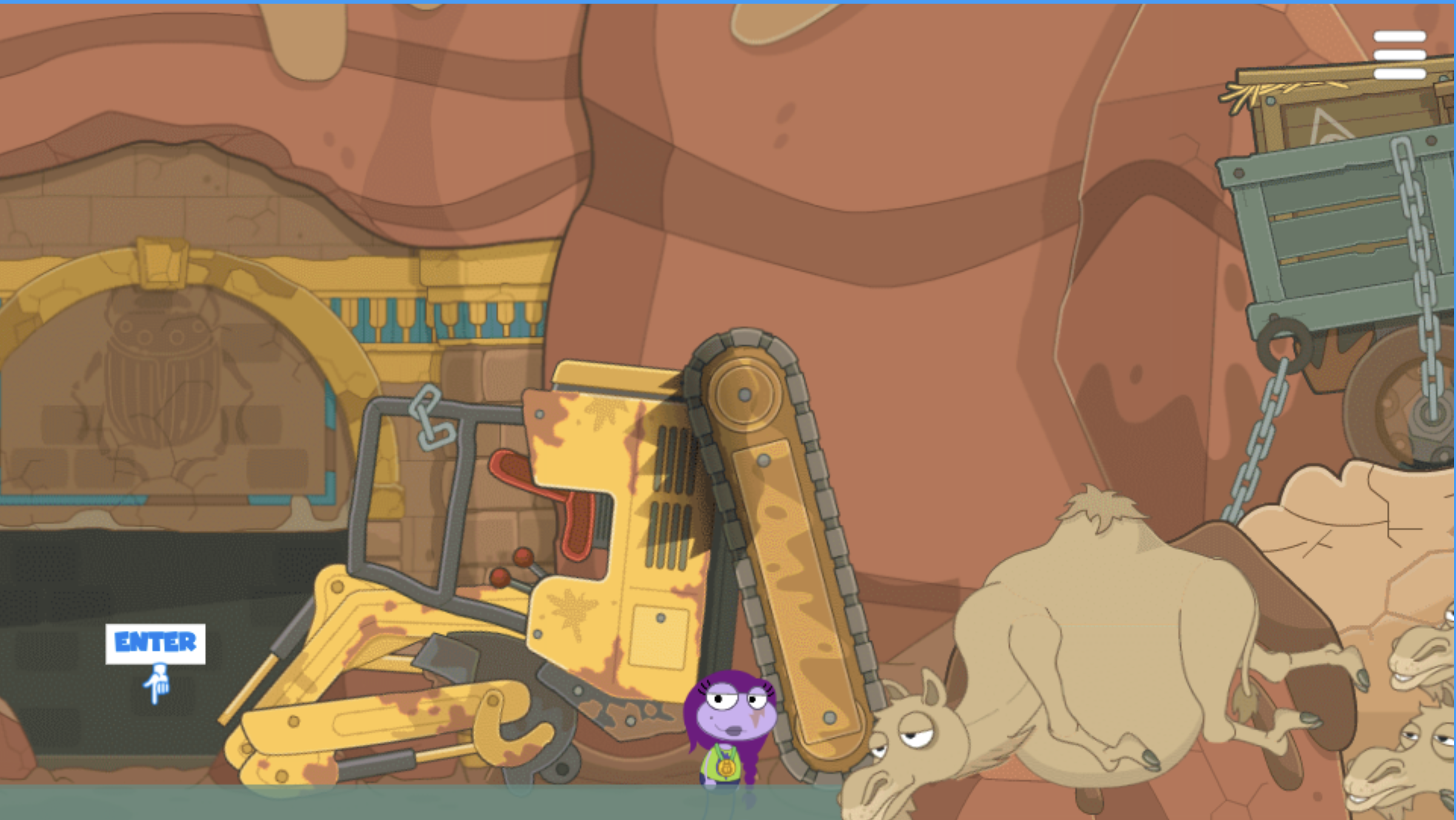 Upon entering the tomb, pick up the hawk blinder, which is used to block a bird’s distractions. Further inside, the tomb is caved in! But there must have been someone digging here before the flood. 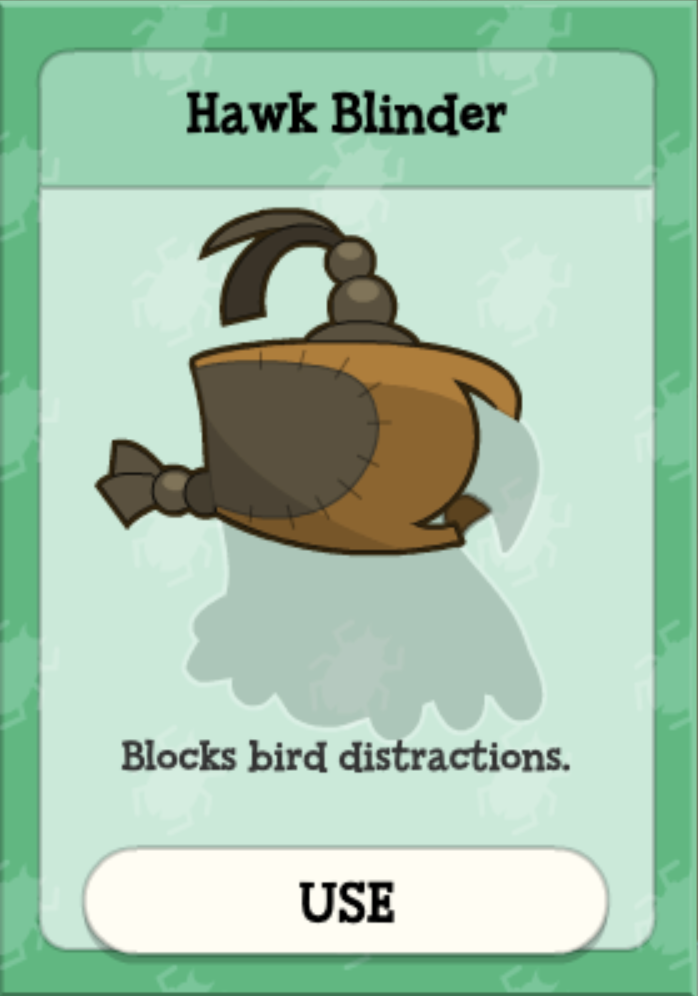 Exit the tomb and jump to the left to find the missing falcon. Equip the hawk blinder near the bird, which will automatically fly back up to its master. Now that you've retrieved the bird, the falcon’s handler offers to return the favor. Horus, the hawk, will be your eyes in the sky. He’ll help you find the missing equipment in the desert! Fly around the desert and keep an eye out for the missing machinery. Make a sharp right from the original starting point towards the bottom right corner to locate the digger. 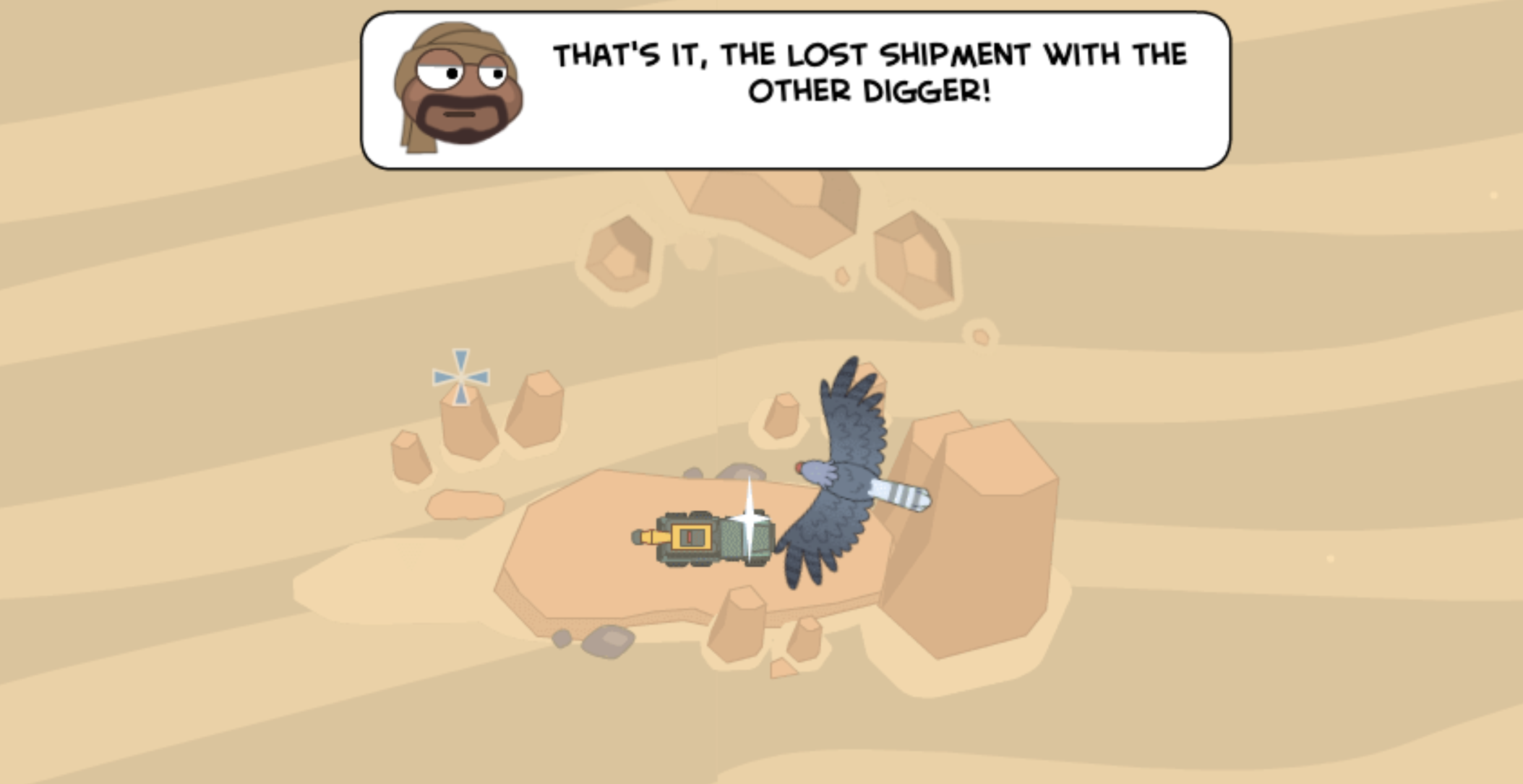 The digger is in working order. Did somebody just park it out here? There’s an item in the front seat – a stack of receipts! A shovel, some buckets, scuba tank, crickets?! Why would anyone need a scuba tank in the desert? Curious... With the digger in tow, hop in Bes’ car and make your way back to the village. 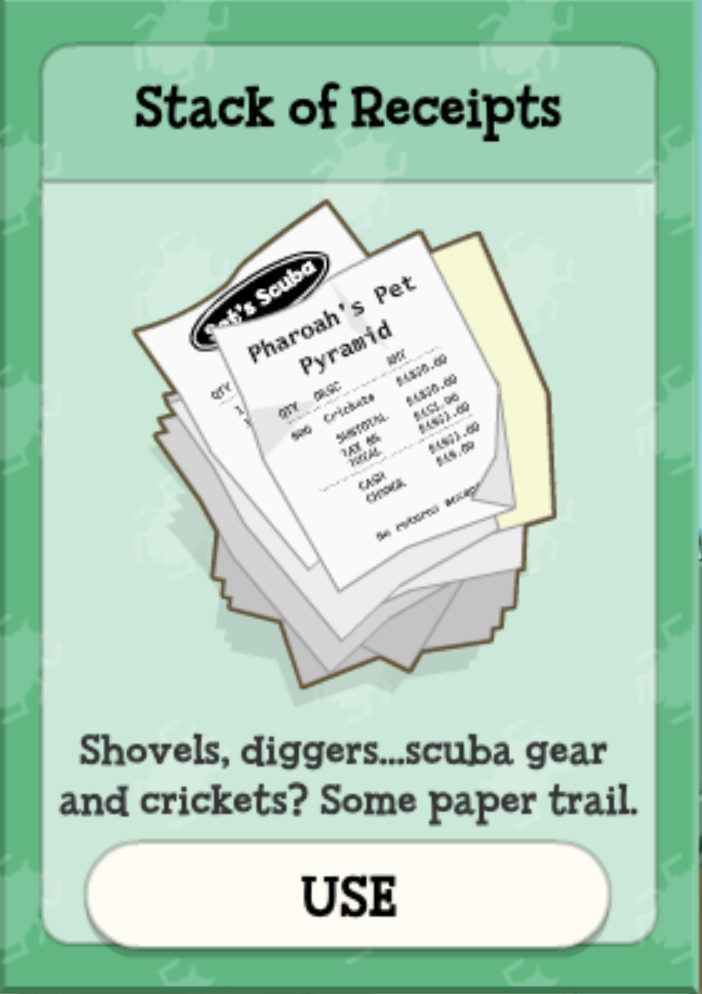 Back in town, speak with Howard Diggory and be sure to ask him about the strange receipts. Apparently, the scuba tank is his birthday surprise!

Now with the working digger and the drained site, enter the tomb. Inside the tomb, the foreman is already clearing the cave in. Run past him, jump into the second room, and pick up the piece of charcoal from the floor. Above the charcoal, the wall is decorated with hieroglyphics and pictures. What do they mean? 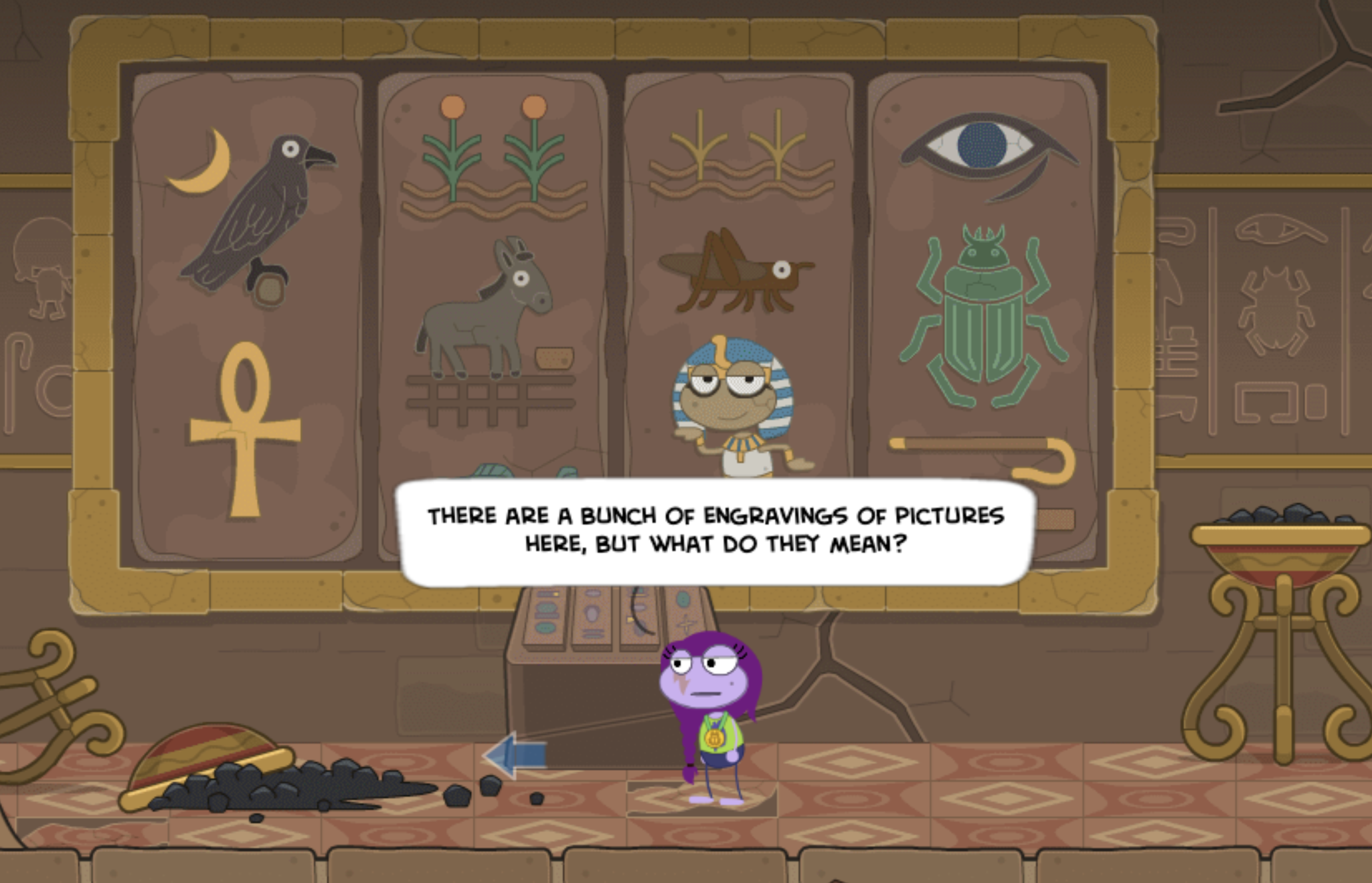 Use the charcoal from your inventory and the receipt paper to make charcoal rubbings of the engravings. Once you have your own set of the wall’s engravings, return to the village. Maybe one of the locals can figure it out! 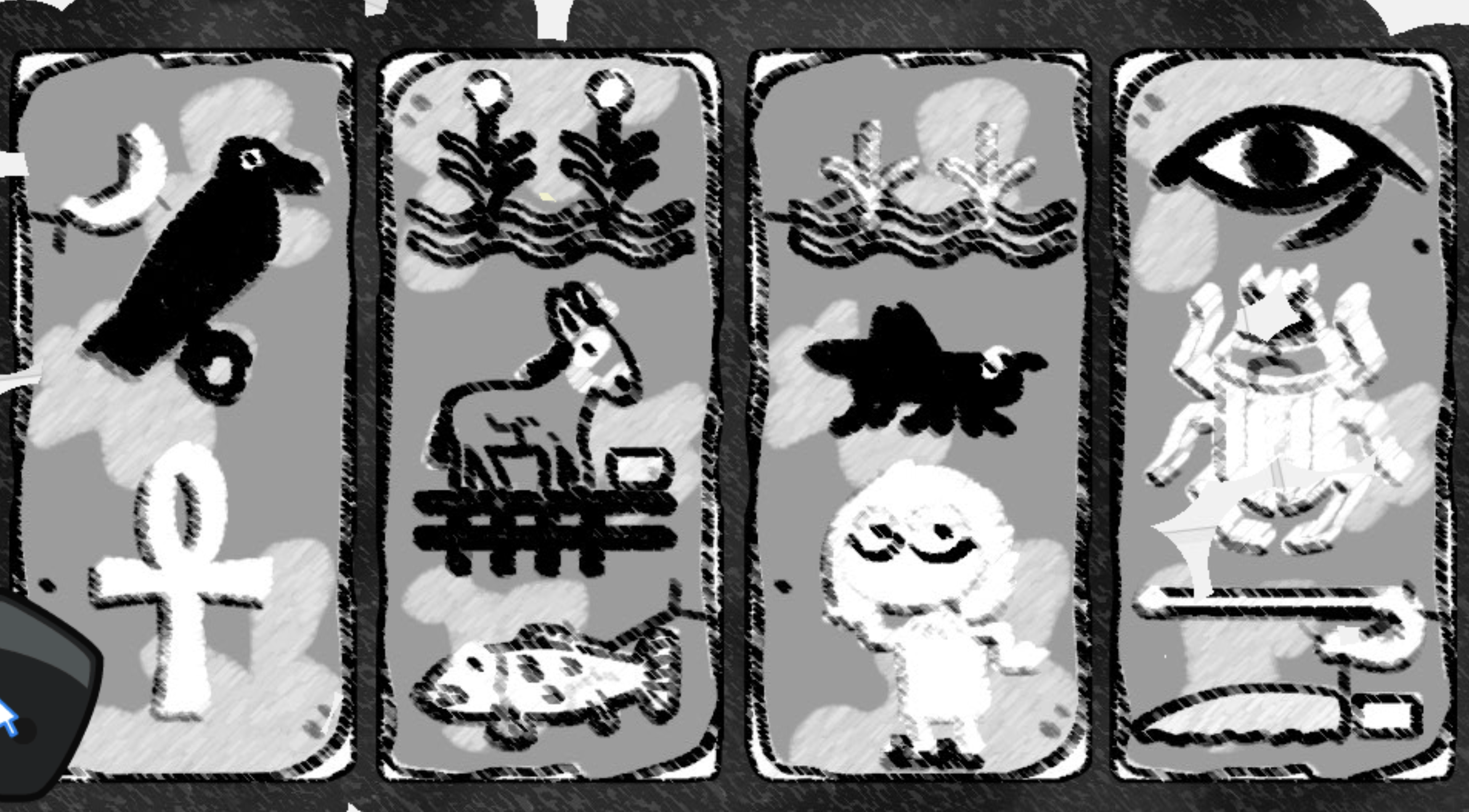 The old merchant knows these pictograms! The images tell a story, but it's out of order. She’ll tell you about her ancestors’ legends in the pictograms. “In a time of famine, the pharaoh pleaded with the gods to God's gift to the spirit to the Pharaoh and his people. Overnight life and prosperity swept the land. Rainy bounties of crops, livestock and fish.” Keep the woman’s story in mind and return to the tomb. 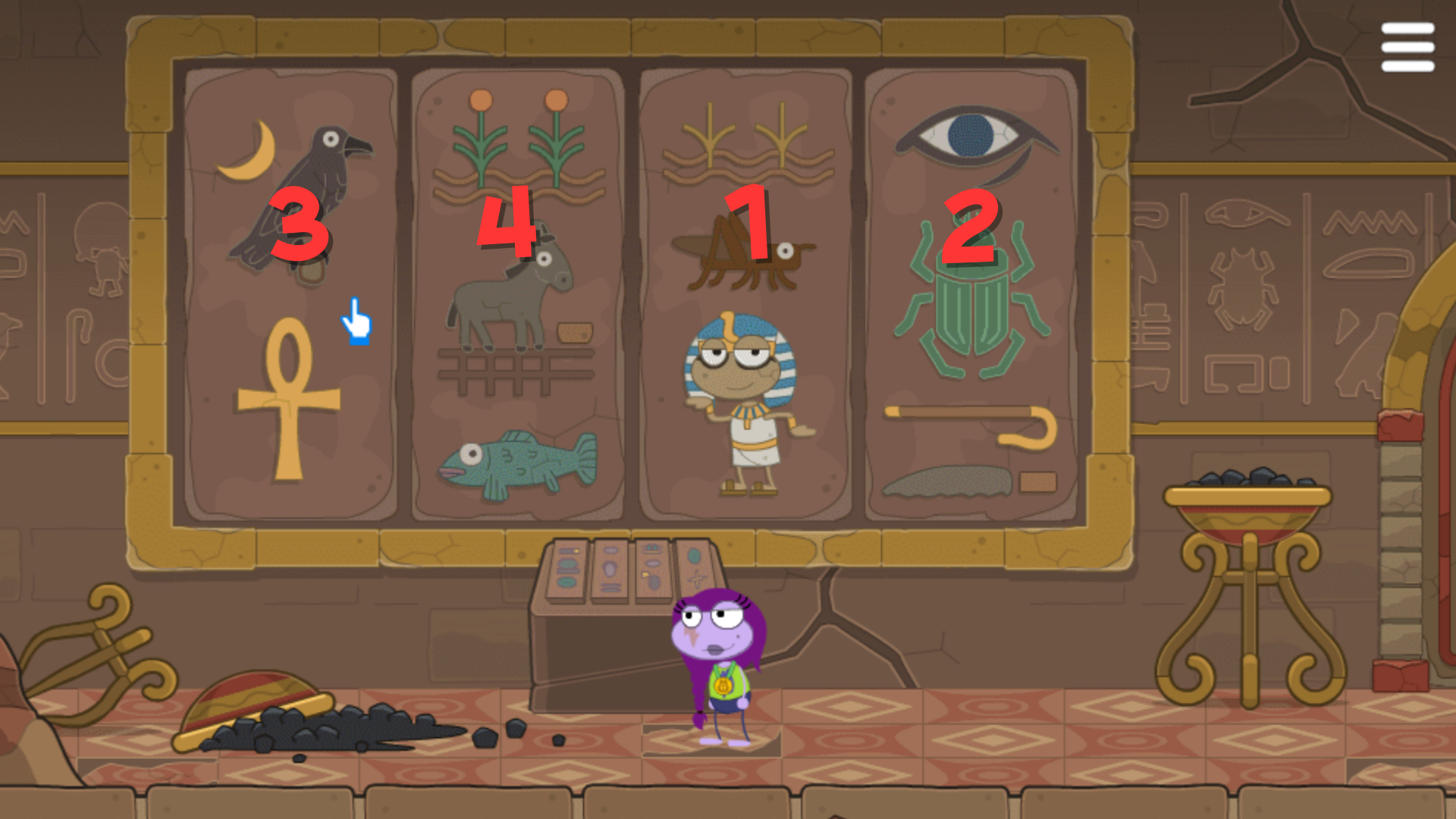 In front of the wall of pictograms, press the tablets on the wall in the correct order of events. After you choose the right arrangement of tablets, the sealed passage is unlocked. Go down the hidden stairway and emerge in the newly revealed room.

Explore the room for clues.It looks like one of the contraptions is missing. You passed the other device in the village earlier today! Climb out of the tomb and search for the matching item.

At the village’s top level, find the boy chasing a cat – with the missing item in his hand. Follow the pair and try to catch the cat to stop him. Click on the boy and ask if he'll let you return the merkhet, which is used to track the paths of stars across the night sky. Once it’s in your possession, travel back into the tomb’s furthest room. 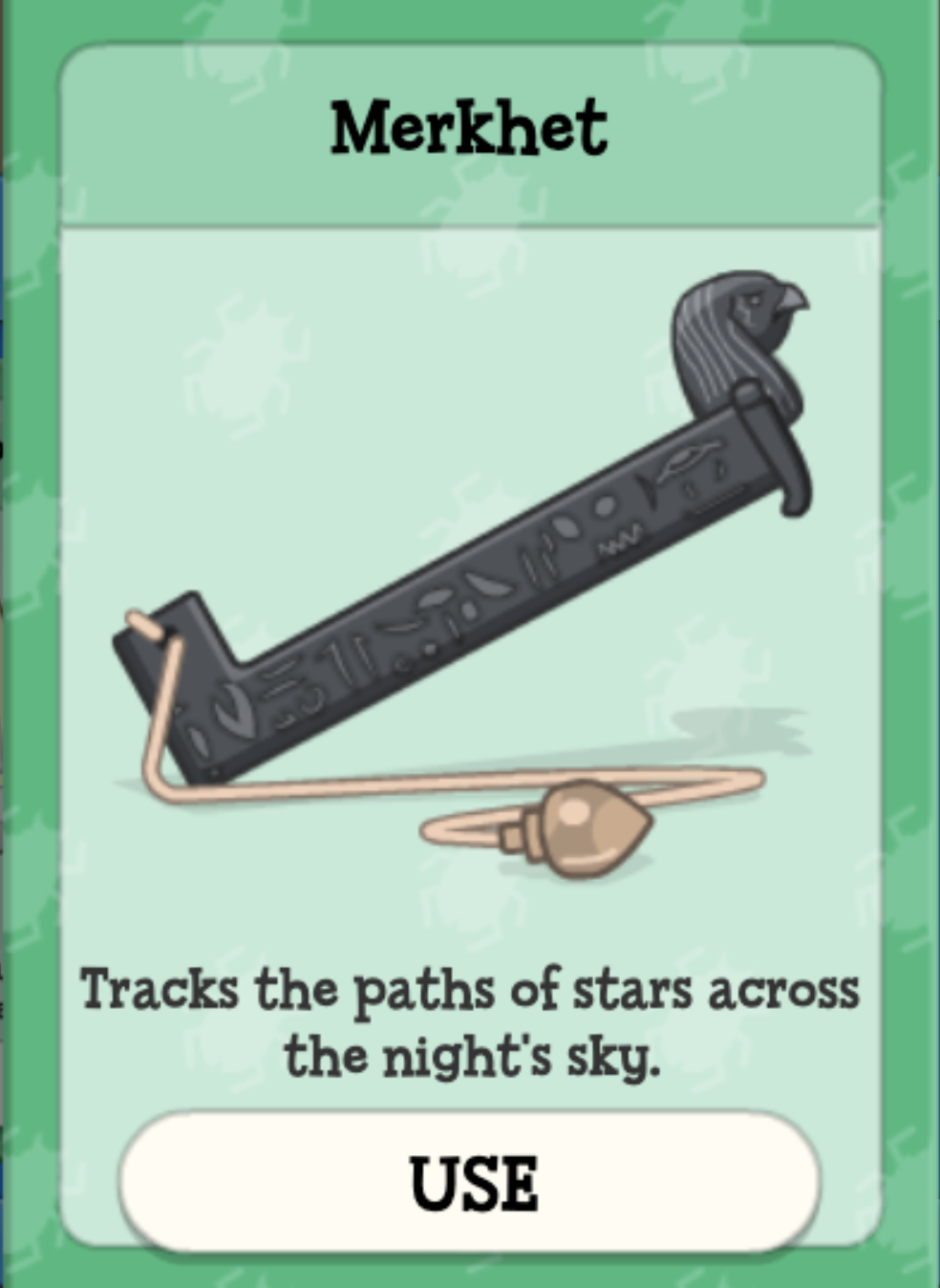 In the constellation room, place your merkhet on the empty pedestal.  Move the wheel behind the merkhet and align the blue dot along the horizontal line.  The position the blue star meets the straight line is where you will align the merkhet’s strings. Repeat on the opposite end. Once both hanging strings are aligned with the blue star’s path, you'll be able to enter the next room. 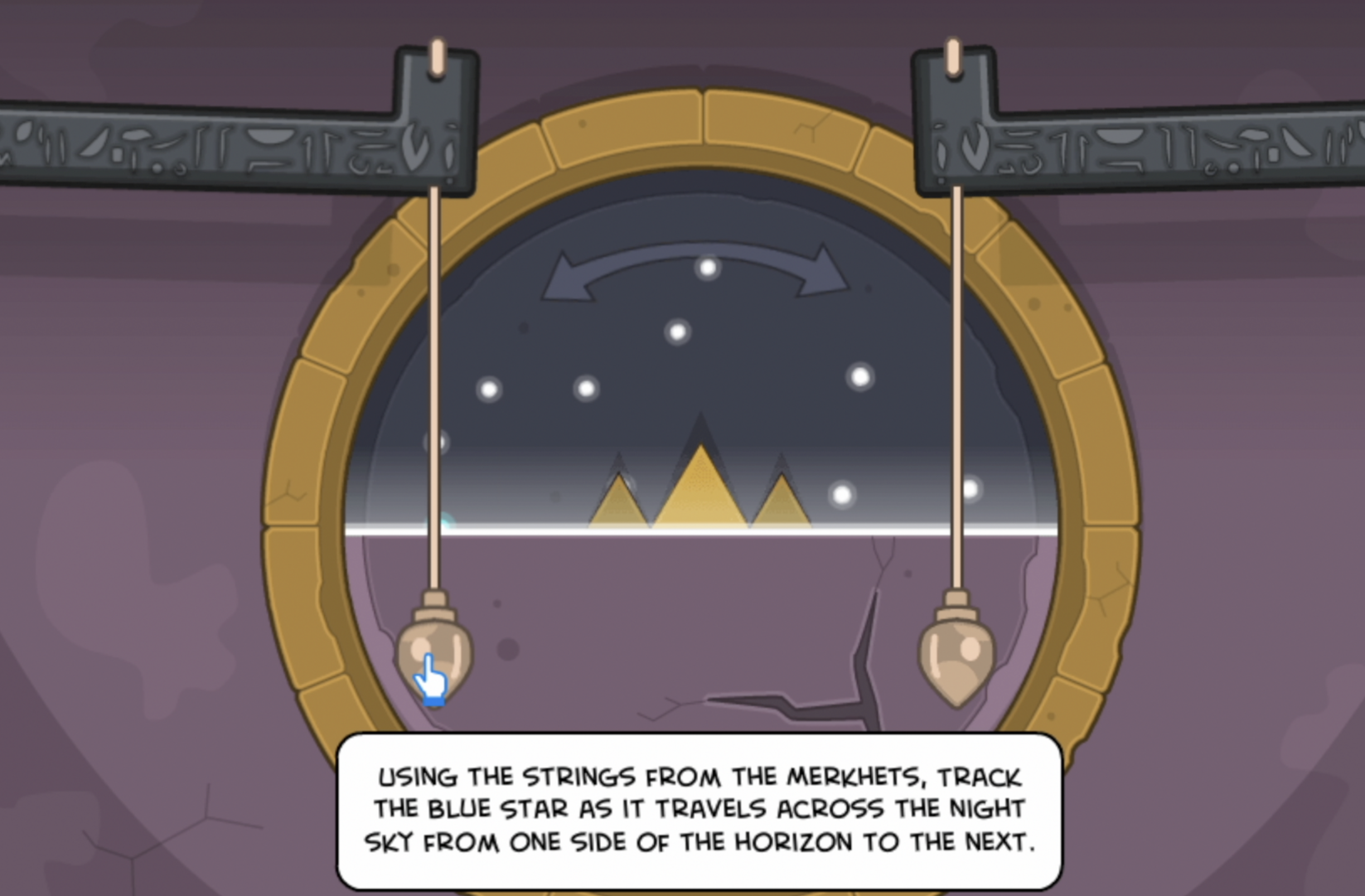 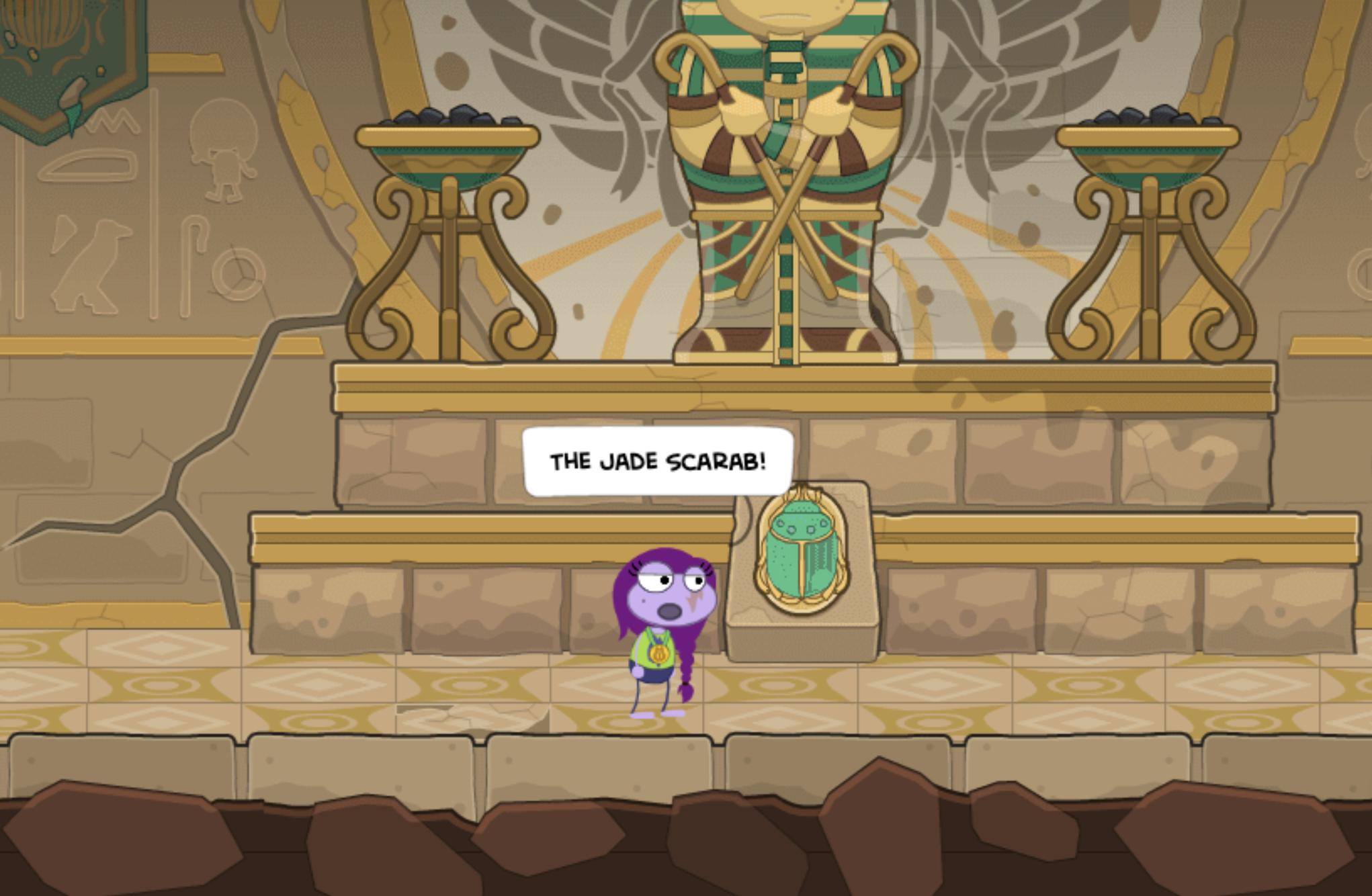 Unfortunately, your celebration is cut short. The foreman steals the Jade Scarab from your hands and seals the tomb behind him – with you trapped in. He’s the mastermind behind the curse!

When hope is almost lost, the green-eyed cat from the village appears from behind the mummy. Push the sarcophagus lid back and you'll find an escape route. Climb down the hole and follow the cat. 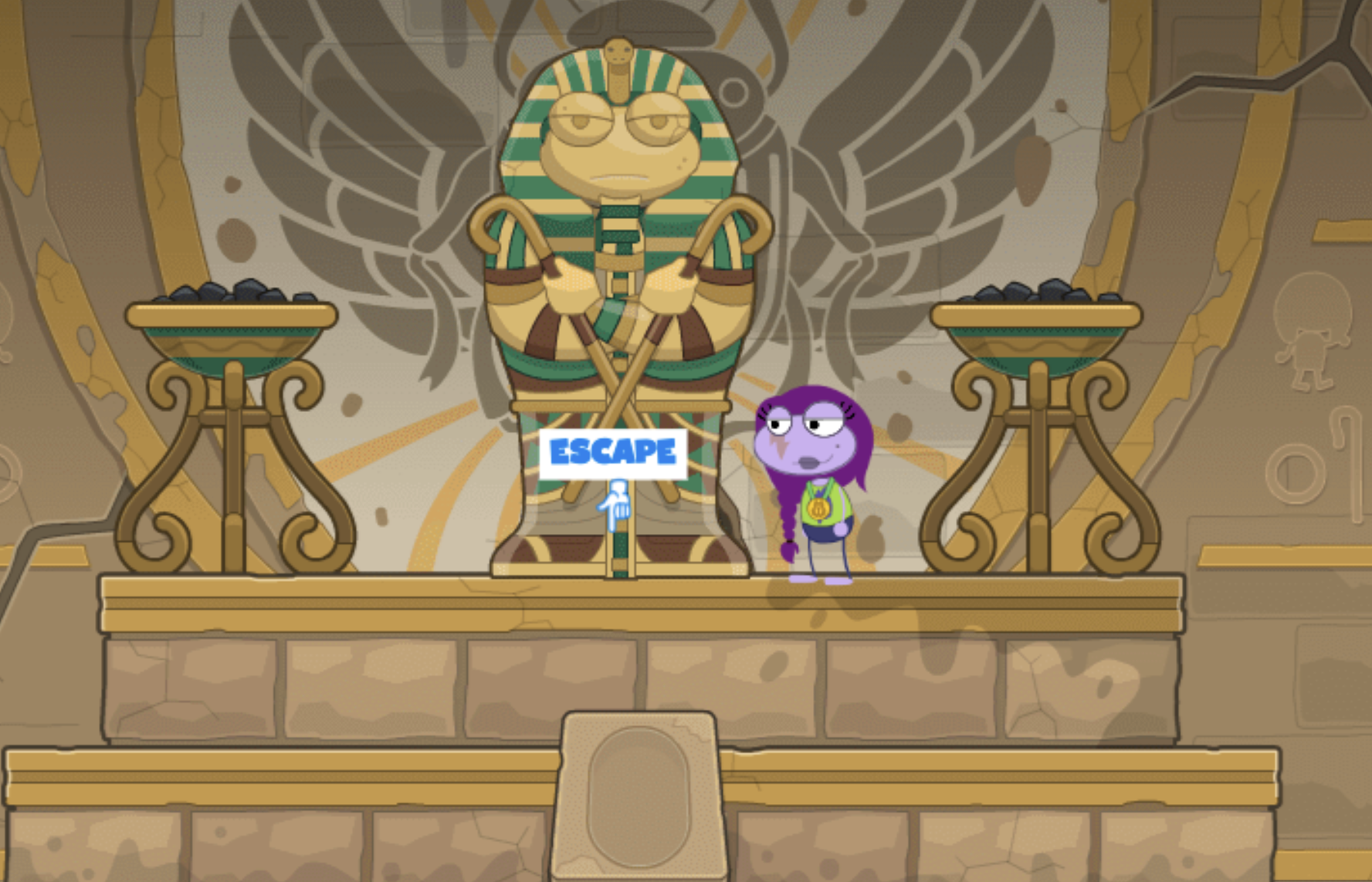 Your new friend seems to know its way around the maze. Navigate the tunnels and keep your eyes peeled for the green-eyed cat to show you the way. When you finally reach the bottom level, you’re surprised with the real Jade scarab. 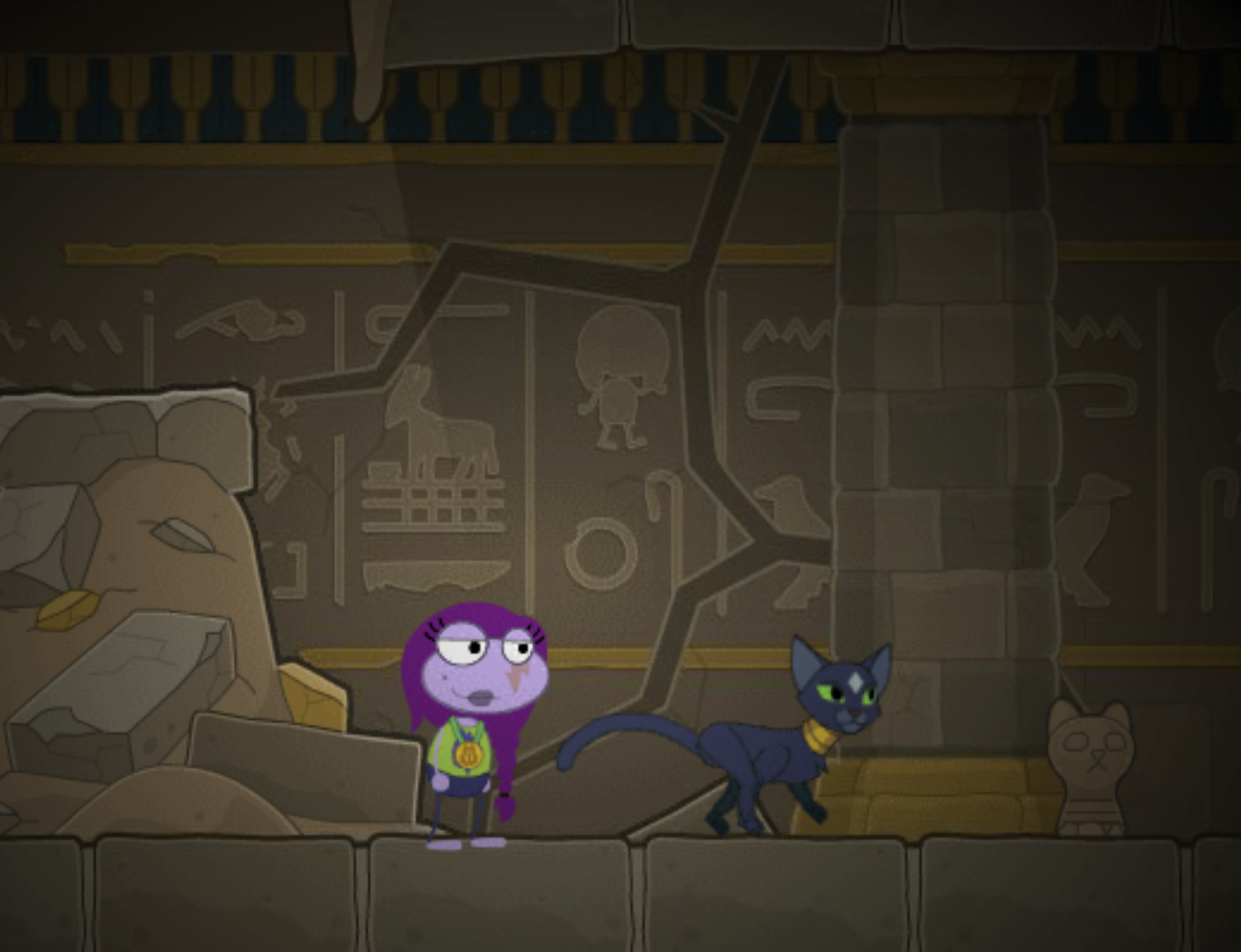 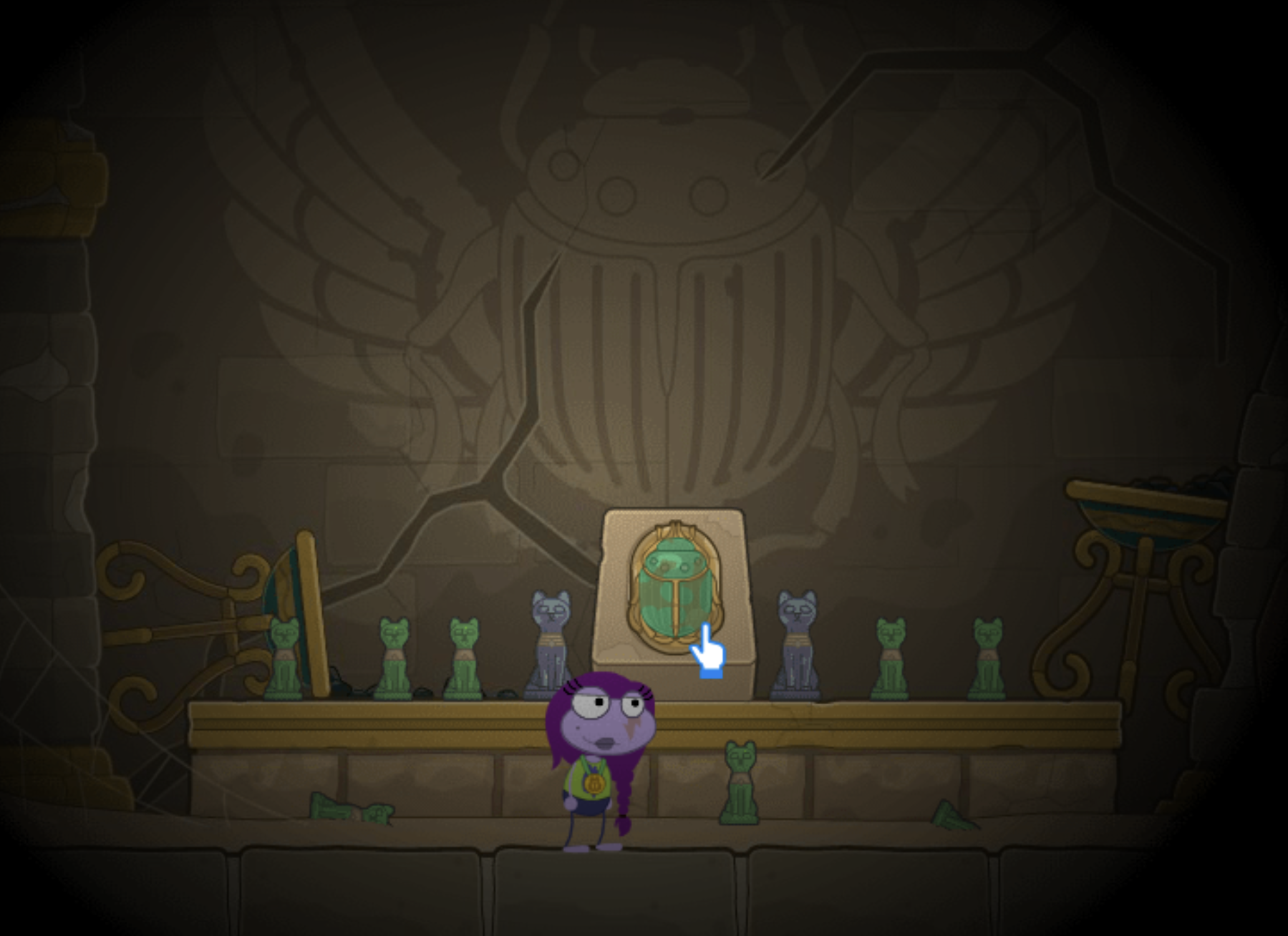 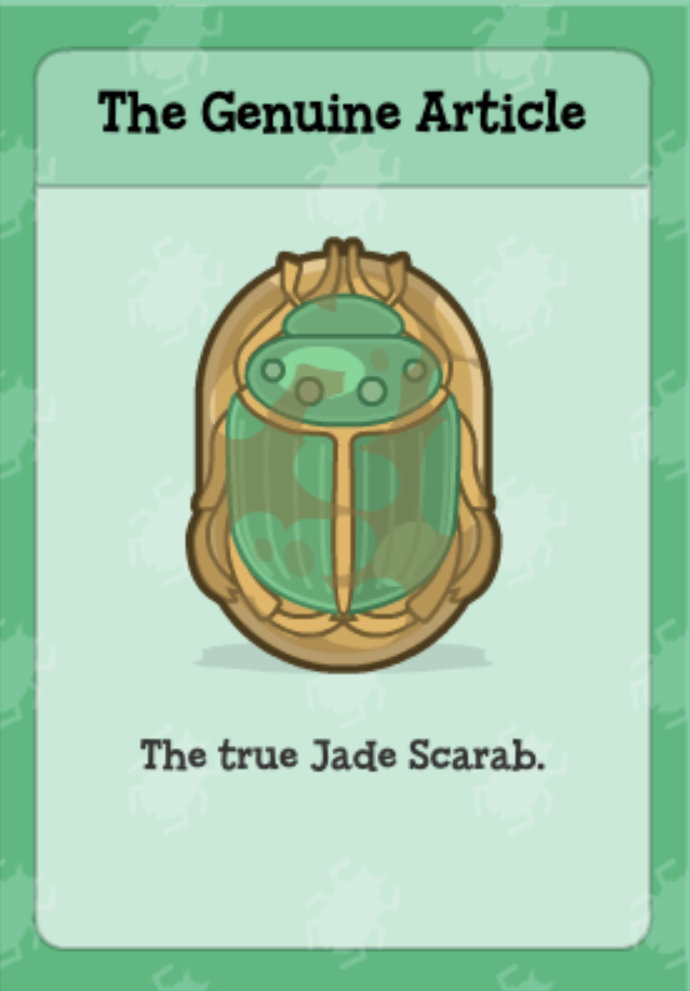 After adding the artifact to your inventory, a hidden outlet is revealed at the top right corner of the room. Climb up to exit the maze.

Back aboveground, you'll emerge smack dab between the foreman, Howard Diggory, and the green-eyed cat. The two men plan to sell the real Jade Scarab to the queen! 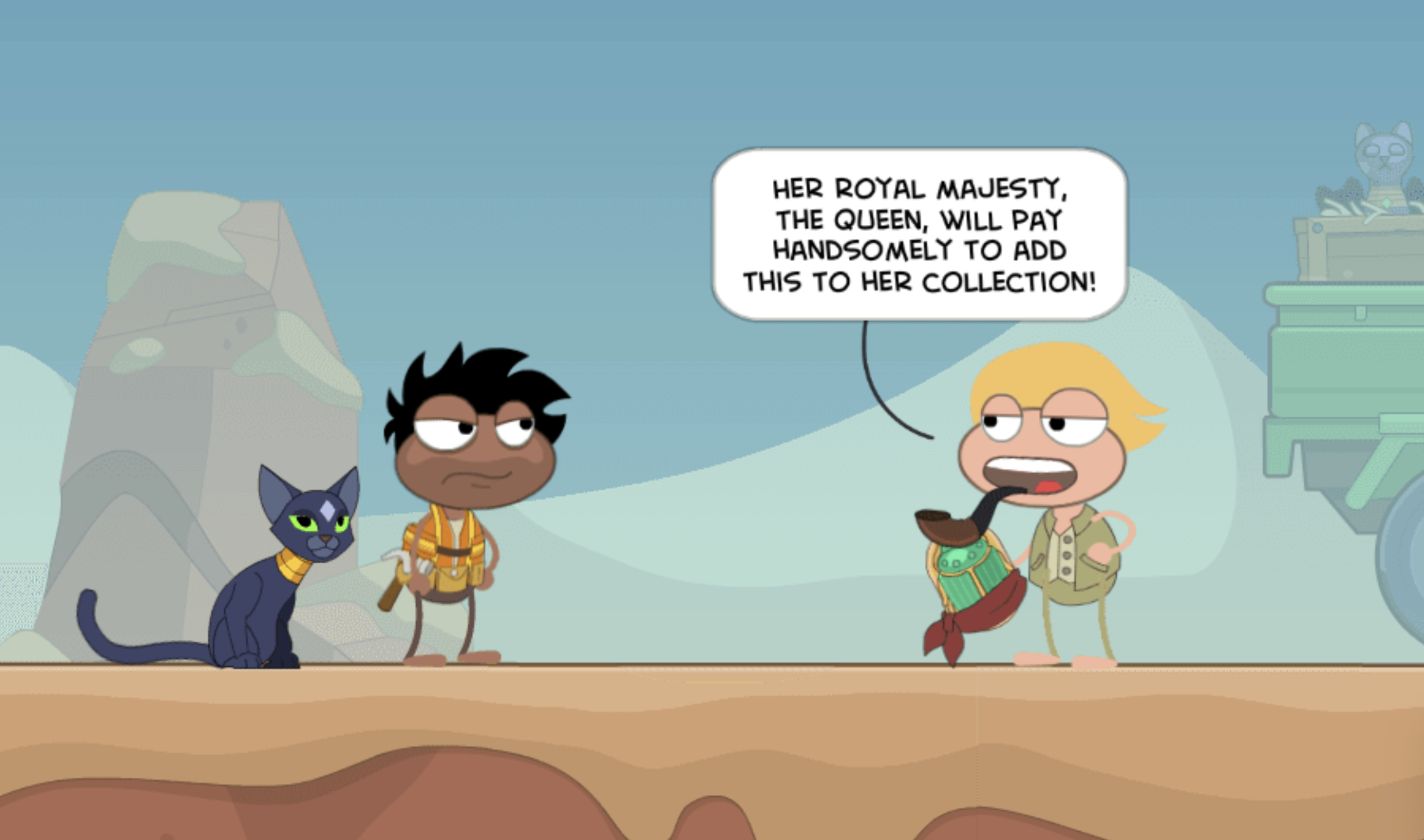 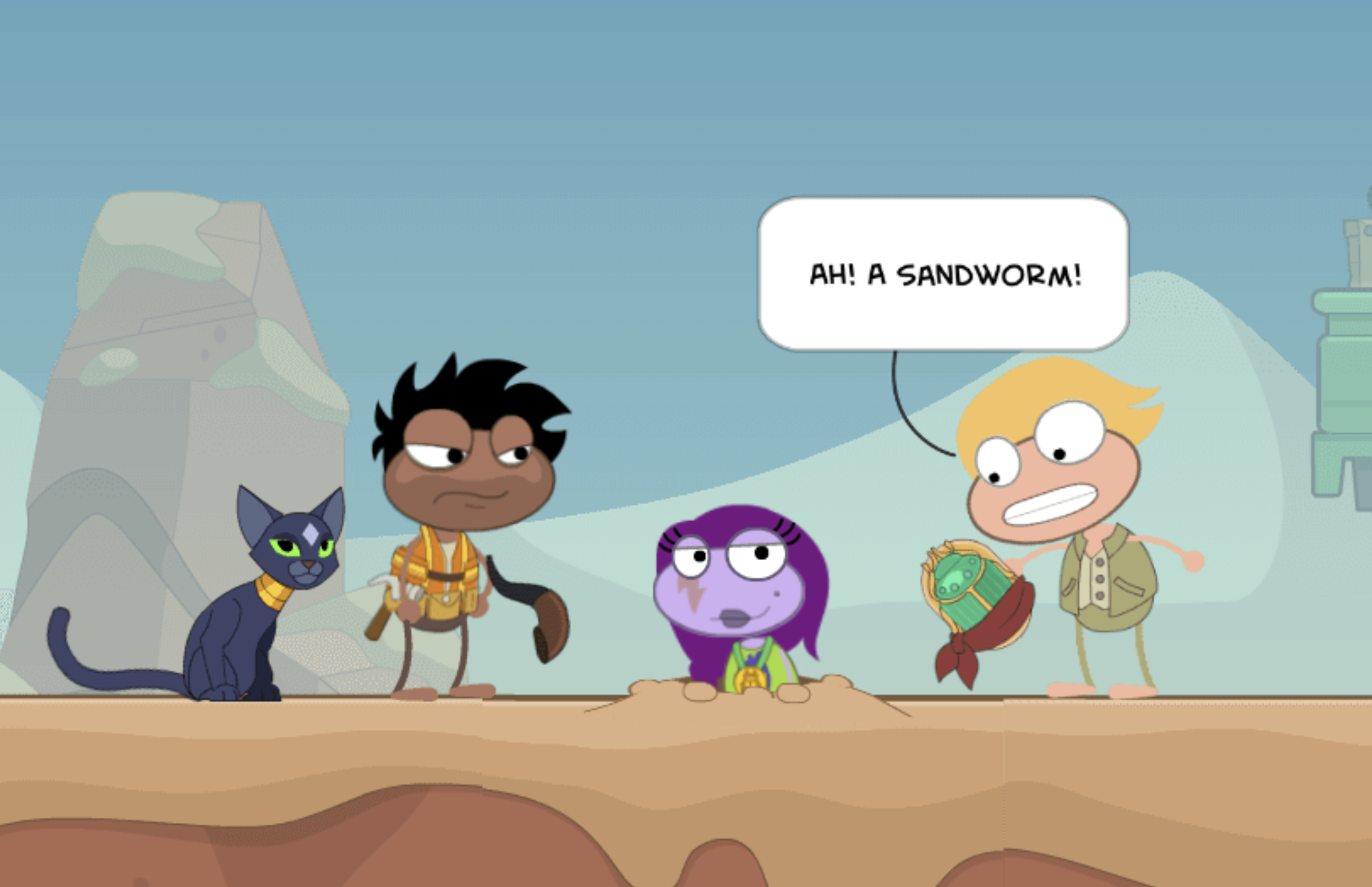 They’ve been in cahoots the entire time!

In a flash, the cat's eyes begin to glow and the feline levitates in the air. The black cat transforms into a human-like figure, declaring that the Jade Scarab must be protected by the people of this land. The cat is Bastet – the goddess of protection! 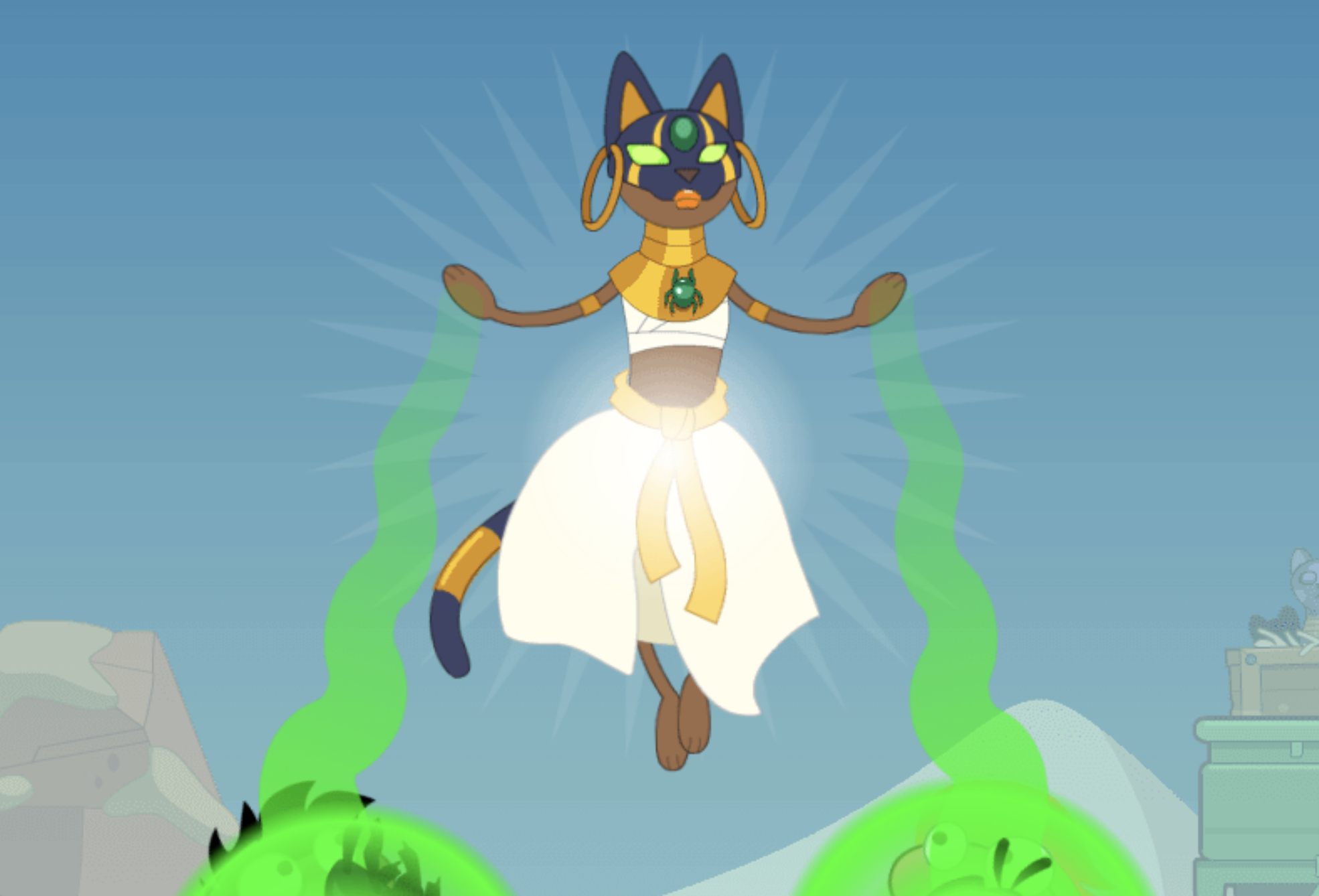 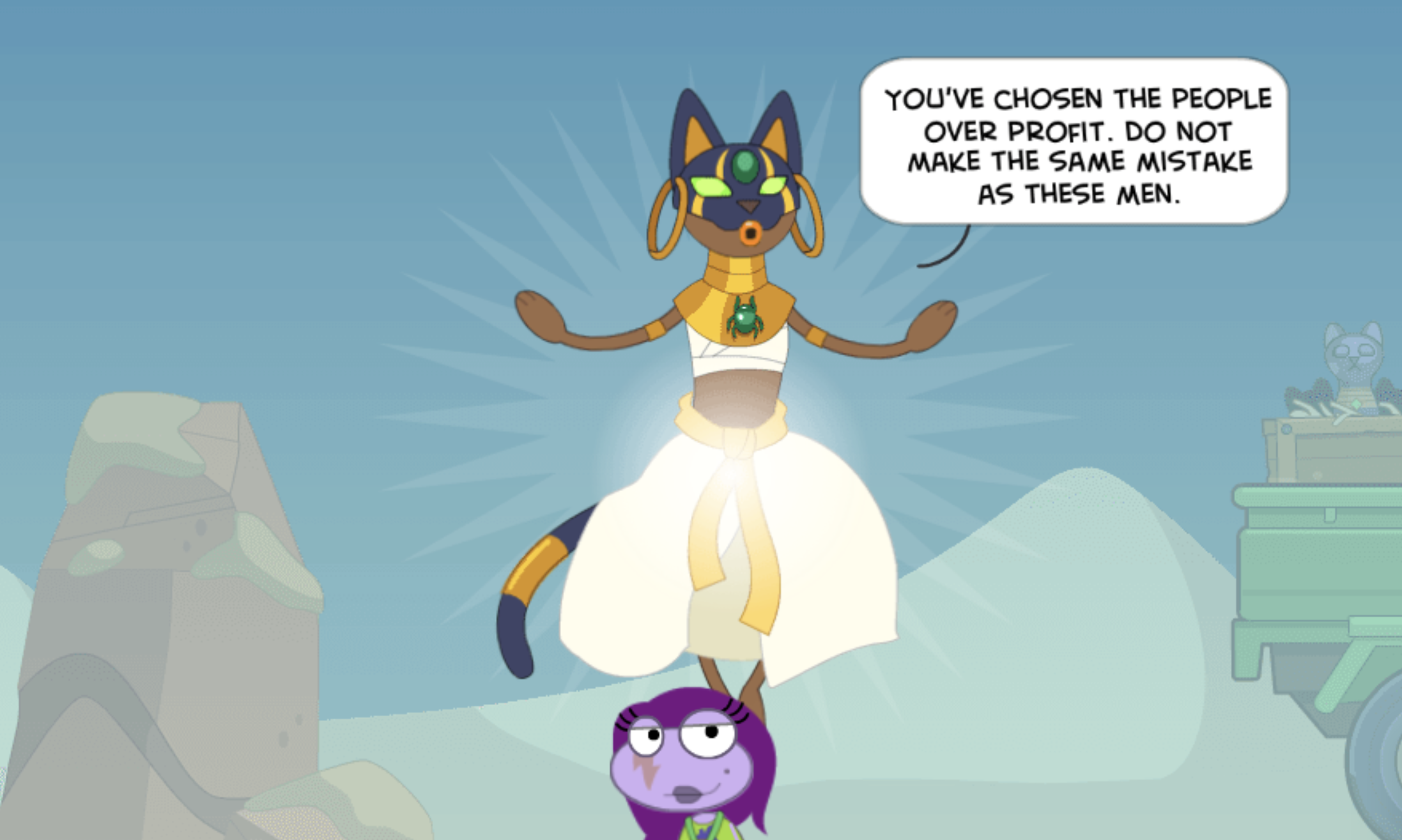 The floating figure turns the two men into dung beetles as punishment. Bastet is grateful that you've chosen the people over profit, but warns of making the same mistake as the men. Just as quickly as it began, Bastet transforms back into her feline form and returns to the village. Now that you're safely out, you're whisked back to the museum to deliver the real Jade Scarab. 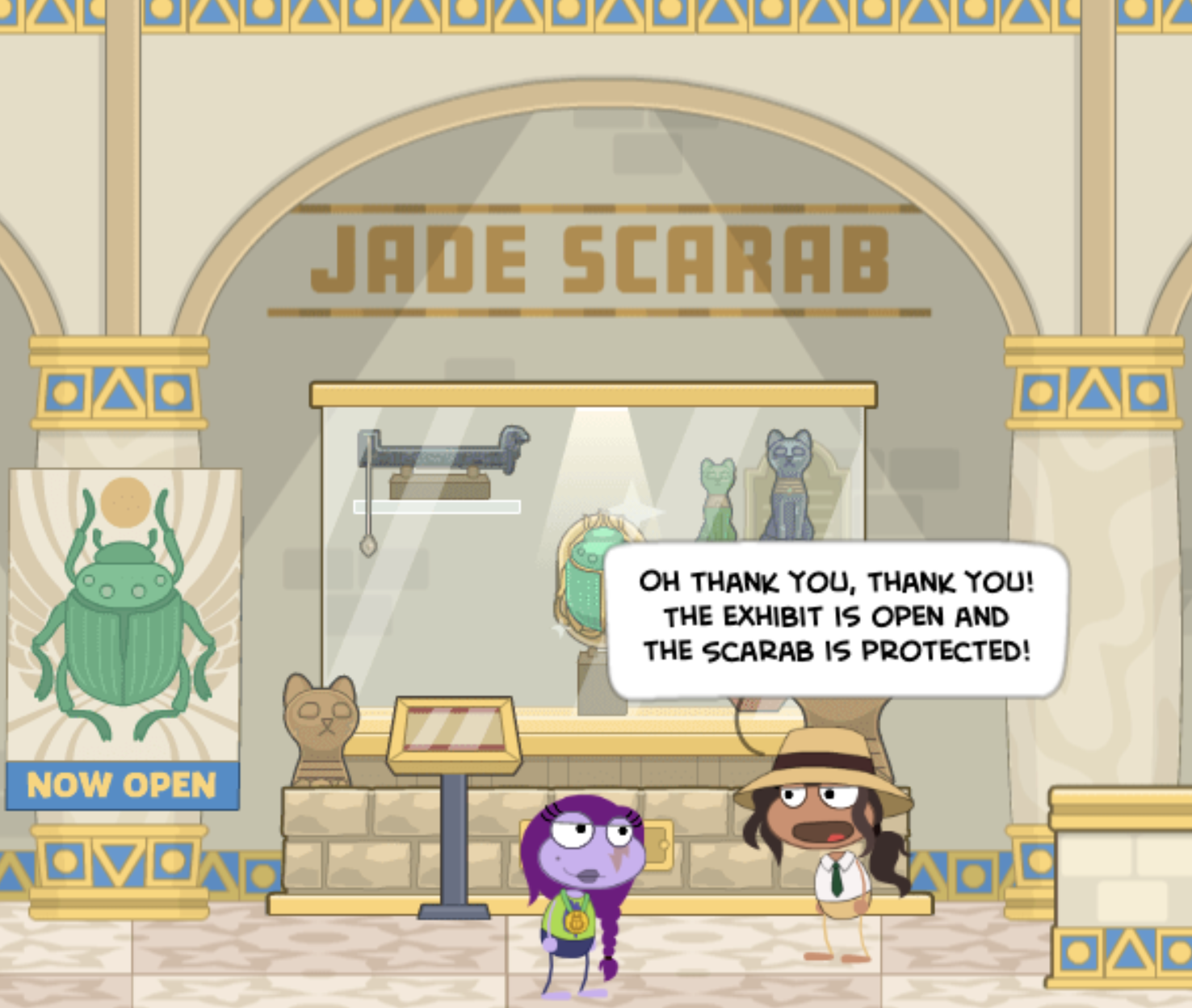 With the Jade Scarab safe and sound in the Museum, your efforts are rewarded with 200 credits and your island medallion. Congratulations! The Scarab is protected and will remain where it belongs – with its people. 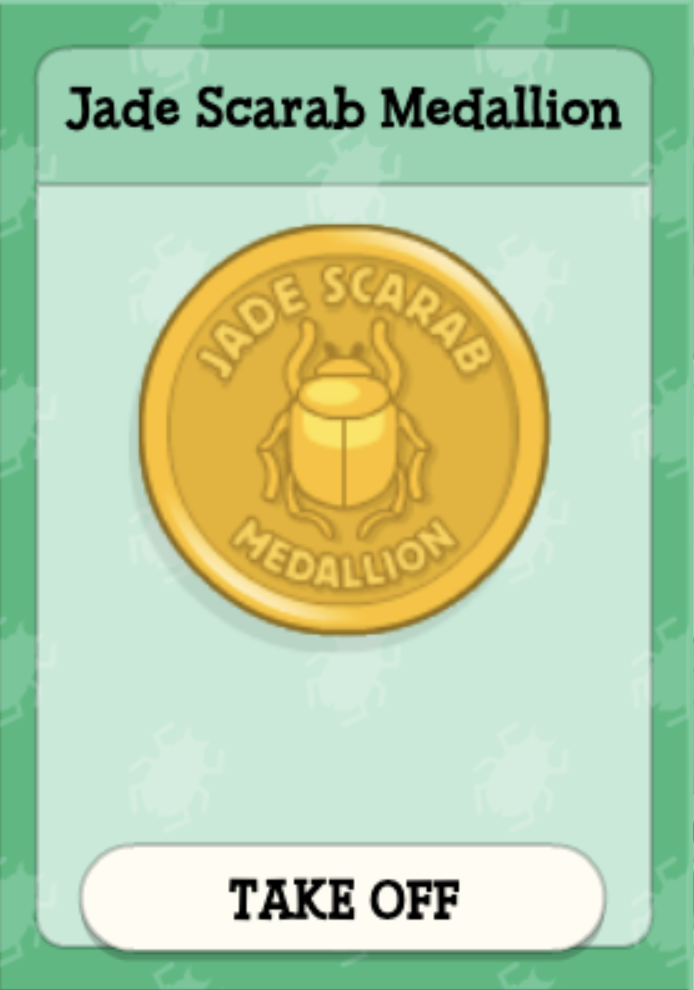 I loved this island! Though I will say that the merkhets were hard...

I wish you guys would stop giving us guides like this and just let us solve the island for ourselves. It's more fun that way.

You can still solve the island by yourself. Some people are stuck in the island so they check the guide on what to do.

You know you say that but yet you're looking at it so?

but your looking at it tho?

Yeah, it was certainly better than fairy tale and goofball because it took some time.
But now that we are done with the dream island contest islands, can we drop the animations?
It was a great short island, something to do if you have nothing to do or waiting for something.
It was laced with great egyptian culture and mythology, I half expected Bes to be the ugly dwarf god, protector of people.
It had great detail and I loved the part where you fly Horus ( great easter eggs) because it was sort of like Wild West island
I just didn't like the animations, that is my only downside to this island.
Great job guys, we can't wait for the old islands and we know you won't put animations on that.
Thankyou

Yah, I thought that Bes would be an ugly dwarf

Wow. Cool. Dream island. Whatever. Can we go back to converting original islands now? WITHOUT weird new animations?

The Illuminati signs were quite disturbing.

love this thank you man

Thank you so much for all your help!!