What a magical day, Poptropicans! There's an incredibly special surprise in store for you! Without further ado, all players are officially invited to play Unicorn Frenzy! 🦄🌈 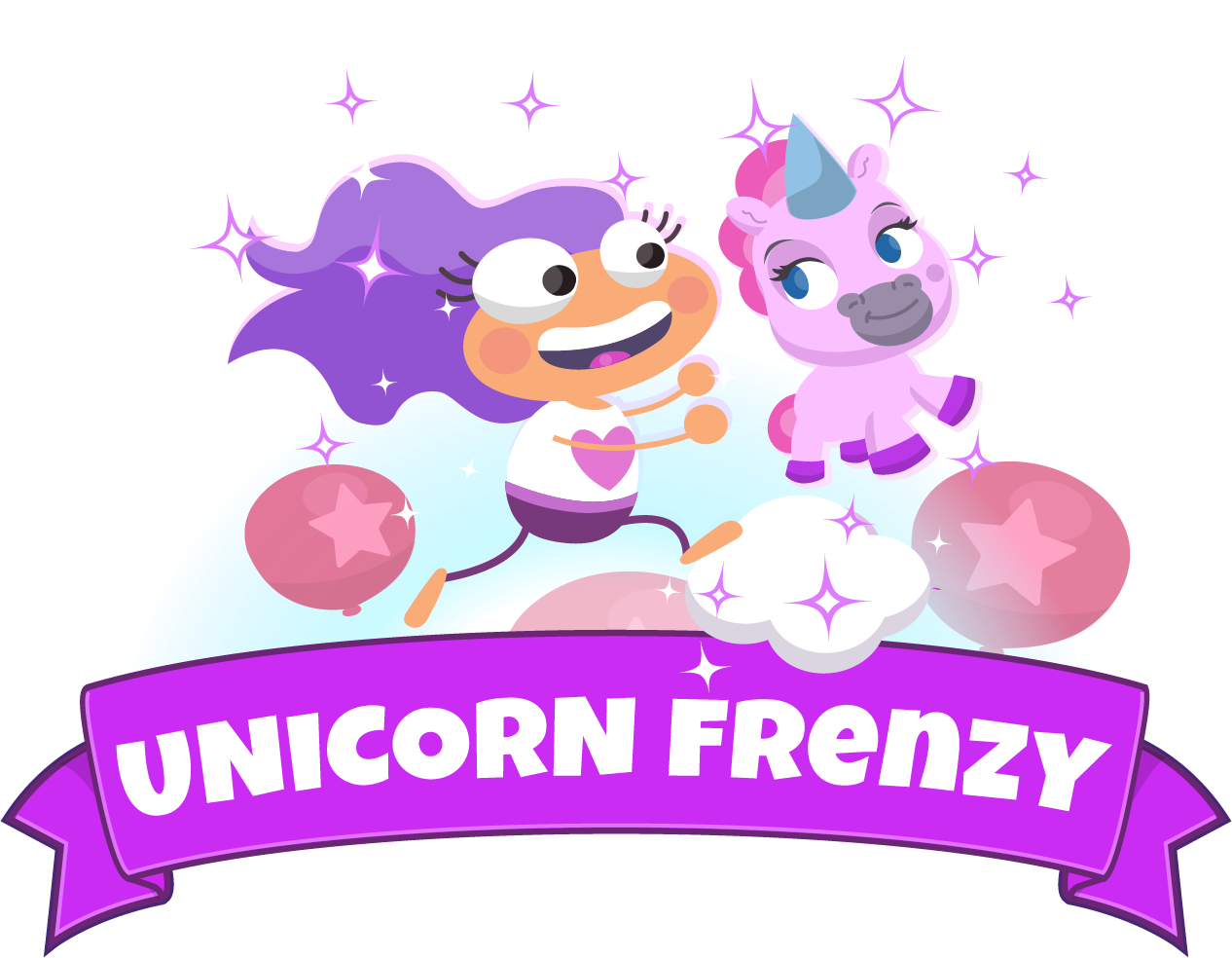 Welcome to the dreamy kingdom, home to massive herds of unicorns – it’s like a dream! The unicorns fit right in with the cotton candy clouds, rainbows, and hot air balloons! Explore the brand new whimsical world and take in the sights and sounds around the arena. Then, it’s game time! Join other players in a full-blown Unicorn Frenzy! ✨

You’ll have 2 minutes to dash, jump, and scramble around the arena to collect as many unicorns as you can! Race against other players and be on the lookout for purple lightning bolts. You’ll earn speed power-ups that can mean the difference between winning and losing! 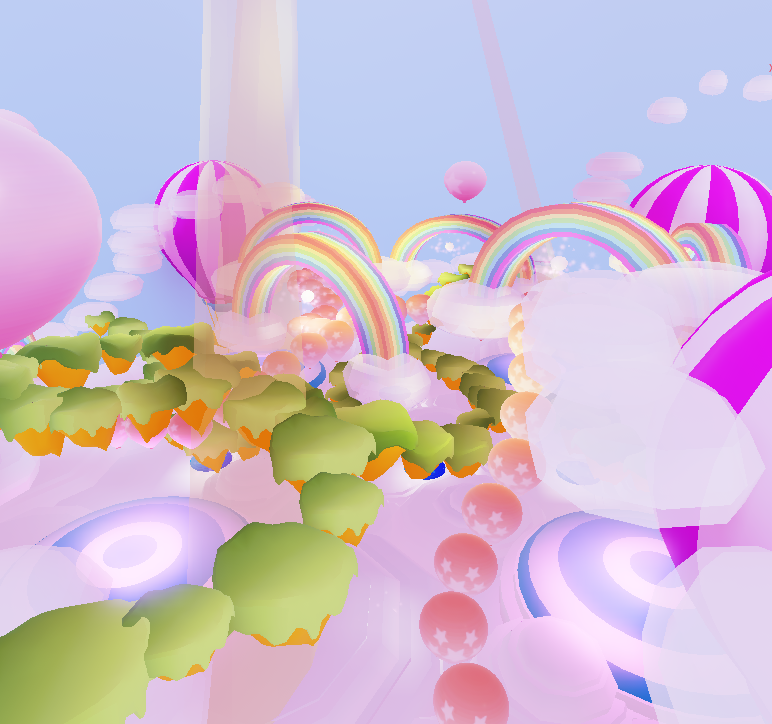 What do you think about the adorable unicorns? While you’re collecting the ‘corned cuties, you might happen upon some of the teeny tiny, baby unicorns hiding in the clouds! Scoop those up too! Don't let their cuteness distract you! If you fall from any of the platforms, just hop on one of the trampolines or floating platforms to return to the sky. Can you find all of the different designs? Keep your eyes peeled to find all of the unique unicorns? 👀

The last time we hung out with Amelia, we thought we were delivering important cargo from Survival Island. Little did we know, the crate was filled with unicorns! 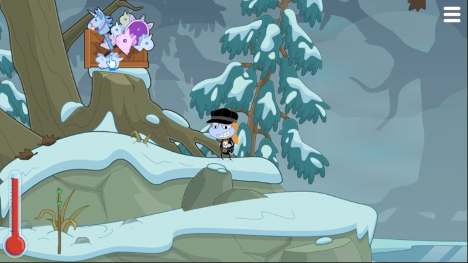 Amelia even revealed her private quarters for the first time. The entire room was fill to the brim with unicorn plushies, rainbows, and pink accessories! To say that the adventurer is a unicorn fanatic is an understatement. Now that her secret’s out, Amelia’s more than willing to share her passion for unicorns with us. 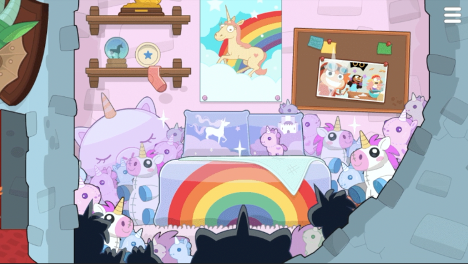 After a lifetime of unicorn chasing, Amelia’s an expert on the mythical creatures – she knows all exactly where to find them. She’s been waiting for someone to share her go-to spots with and is finally letting us in on her secret… A hidden haven for unicorns!

Amelia's so excited to share her favorite hobby with you! Pop into Unicorn Frenzy on Roblox to begin the brand new adventure and challenge your friends to a round and see who can collect the most points!

BONUS: Some of our Team is hanging out in the arena NOW for a short while! Visit Unicorn Frenzy for the chance to play against us and be one of the first players in the new experience! 🦄🌈

Not all kids like Roblox we go to Poptropica for a reason.

Wow. And to think selling your headquarters wasn't enough.

LETTER TO SAPPORT PHB’S OPEN LETTER. Pop creators plz consider telling us when we will see classic islands. Does not have to be soon but if you tell us we won’t get angry 😡. Right now we’re angry 😡 😤. Wasting time on Roblox and improving home islands shows us you don’t care about classic players and new players. Plz use these tips for the better of Poptropica. Plz consider making a post about this.

Can we pleeease have news on the old islands? we don't want these mini quests or other distractions.
I have sort of stopped playing poptropica now, seeing as the creators don't care about the old islands and are changing poptropica into something for babies. Poptropica was sooo good and I don't just speak for myself when I say that we really want old islands back. In fact, I have lost respect and faith in potropica as it is only focusing on new shiny, easy, babyish islands. What's more, they don't listen to us.
Please consider this post, poptropica, because I have lost respect in you guys. sorry.

Just saying... wasn't Poptropica supposed to be its own game? Now that its expanding onto Roblox, it doesn't even feel like its own game anymore. It also kind of feels like Poptropica is just going right down to 5 year old. I mean I know this game isn't meant for like adults but still, unicorn frenzy? Anyway, for the people who play Roblox, have a fun time...

P.S poptropica I wasn't trying to be rude in anyway I just wanted to share my opinion...which is an OPINION ok...ya

You know, I mean, I'm all about Poptropica, and I'm not one to criticize about it......... only, I feel like you're right. I don't even play Roblox, or even LIKE it. I honestly just think Poptropica should do it's own thing, no offense. Please please please, can you work on old islands instead? I really miss them. 😢😢

Yeah me too, I don't even like Roblox. Also, I really don't understand why the creators don't just put out the old islands!!!! I mean, I know it is going to take some time, but instead of making all of this stuff that we do not really want right now they could be using this time to actually get the old islands back!!!! Maybe we could have a mix of old and new stuff.... maybe...IDKKK|!!! O DO LIKE THE MONTHLY COSTUME CONTETS THOUGHH
Also.... i REALLY AGREE WITH Kim Possible about the fact that Poptropica has went right down to 5 year old....... ANYWay for the people who play Roblox and actually like this new Poptropica have a grrrrreat timmeeee!!!!!!!!!!!!!!!!!!!!!!!!!!!!!!!!!!!!!!!!!!!!!!!!!

PS THIS IS ALL MY OPINION!!!! DON'T GET MADDDDD

YES! I agree! Creators, stop stalling and wasting your time trying to make us happy with stupid contests and mini quests. BE CREATORS. LISTEN TO YOUR PLAYERS!

HAHAHA GOOD ONE DUDEEEEEE....
But srsly, don't be so mean on the staff....

AND IM SPEAKING FOR EVERYONE WHEN I SAY....( be nice to everyone it just take's time to chill so CHILL! DUDE!!!!!

oh, AND when is the baroness coming back because I hope I win the contest though and I really want to see my outfit in her ship :)

ALL MUST BOW DOWN TO ME!!! OR ILL DESTROY YOU HEHEHEHEHEHAHAHA!!

don't TRY ME! you have defeated me but ILL BE BACK WITH MORE HEHEHEHEEH!

oh no YOU WON'T GET AWAY WITH THIS

sorry about that guy's me and omegon used to be friend's BUT IT'S TIME FOR ME TO CONTINUE ADVENTURING after HIM!

Poptropica was always meant to be its own game, its own entity. I cannot possibly fathom what has driven you, the creators and the developers, into this mad pursuit to focus seemingly on anything but the restoration and remasters of the classic islands. We've been patient, we get that this stuff takes time, but it just seems lately that there is no intention on actively listening to anything veteran poptropica players and new ones have to say.

We just want to play the game again. We just want to have fun. We miss being able to play islands that we all had a blast playing. The new stuff that's been added to poptropica itself as well as outside of the main game . . . simply isn't cutting it.

Like, you make an awesome mini quest, and it probably would have been a great Amelia quest, but you decide, "Hey! You know what would make our players even more furious? Describe and put an awesome minigame on RoBlox!"

C'MON!! THERE ARE LIKE 1 IN A BILLION POPTROPICANS WHO PLAY ROBLOX.

This is my silent protest.

I agree with my sis , you guys should STOP IT! 😏🐱‍👤, and also if anyone wants to be my friend my name is galaxywolfboy12 :) when you get a request that were friends my name in poptropica is Quick Bones :).... UNTILL then Quick Bones OUT!🧐
- Quick Bones👦🏽🦴

Be nice to the staff!