It's hard to believe, but Shrink Ray Island will be the 20th Poptropica Island. That's a lot of adventures -- lots of characters to meet, foes to battle, and items to collect.

In the time since we introduced Early Poptropica, some items have been harder to find than others. To celebrate our 20th Island, we'll be counting down the 20 rarest items in Poptropica. How many of these rare items do you have in your inventory?


The cell phone on Nabooti Island holds many secrets. If you dial 411 and then make a call, you'll find yourself with all the information you could ever need!


The Viking Suit is tucked away in the upper righthand corner of the Viking time period on Time Tangled Island. It's not necessary to complete the quest, so some Poptropicans missed it. To get the Viking Suit, equip the glider from Leonardo's workshop, and then glide from the Viking mountain until you land on the ledge with the suit.


It's the priciest item in the Poptropica Store, but the most versatile. With the Multiverse, you can create your own room and invite your real-life friends to chat and battle. 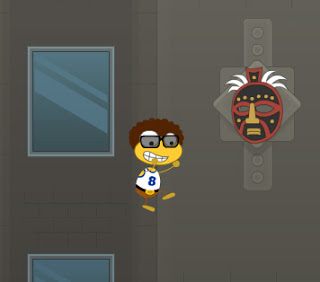 
To celebrate the launch of Nabooti Island, we hid this mask somewhere on Spy Island for a short period of time. This isn't the only treasure hunt item that will show up on this countdown!


Astro-Knights is one of the toughest Islands we've made, so it's no surprise that not many Poptropicans have this medallion in their inventory. But it's not out of reach! All you need is a little perseverance. 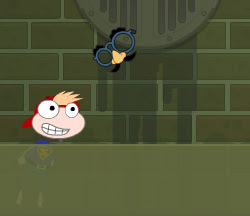 
Another treasure hunt item, the goofy glasses were briefly available in the sewers of Super Power Island. But if you missed out then, you can still get them in the eyeglasses shop on Spy Island!


All Poptropica Members who played the cattle-rustlin' preview game for Wild West Island were granted this exclusive Wild West Hero outfit. But this wasn't even the most rare item from that game! 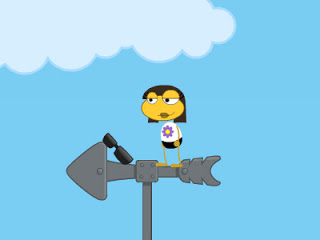 
The sunglasses were briefly available on top of Pendulum's lab on Time Tangled Island. The dark glasses will return, however! Players who get the Spy Island 3" action figures will receive a code that will allow them to wear a Spy Agent costume that includes these killer shades. 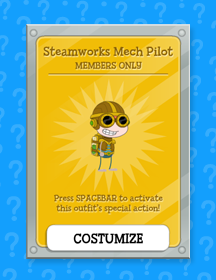 
For a limited time, Poptropica Members were given this Mech Pilot costume. Anyone can freely costume similar costume parts on Poptropica, but this specific costume is a rare one indeed.


Another challenging Island, Skullduggery has seen fewer completions than most of the other Poptropica adventures. It's not too hard, though -- just keep working your way clockwise from one trading post to the next, and in no time you'll have enough doubloons to buy the Phoenix Warbird!


To celebrate the release of our Diary of a Wimpy Kid-themed Island, Wimpy Wonderland, all Poptropica Members got the "Paper Kid" costume. Unlike most costume cards, this one doubled as a special power. You can paperize anyone else you see, too!


This special item was available to Poptropica Members during the launch of Great Pumpkin Island. Snoopy's pal, Woodstock, will follow you around anywhere you go! 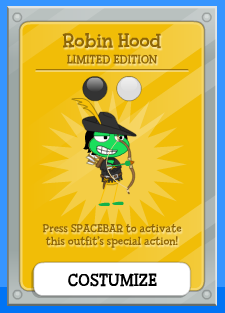 
You can still find the standard-issue Robin Hood costume in the Poptropica store, but this limited edition was available for only a short time back in 2009. 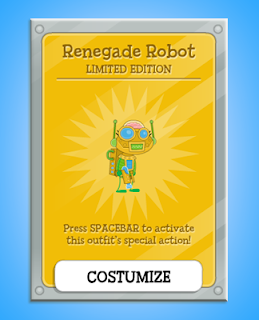 
Like the limited edition Robin Hood costume, the Renegade Robot was available in the Poptropica Store for one short week back in August of 2009.


The most sought-after costume from those heady days of summer 2009, the Light Ninja lives on in the hearts and minds of Poptropicans everywhere.


This dazzling costume was available for a short time by clicking on an otherwise unremarkable window in Early Poptropica.


One of the hardest items to acquire in Poptropica's history was the Nessie Hat during the sneak preview of Cryptids Island. Players could look through a viewfinder on the shores of Loch Ness, and those who spotted Nessie won this item!


Unlike the Loch Ness viewfinder, roping cattle in the Wild West sneak preview wasn't about luck. But it was incredibly difficult, and not many Poptropicans were able to wrangle all of the prizes from that game, including the final prize, Wunder Bubble Tonic.

If you missed any of these rare items over the past 20 Poptropica Islands, never fear: there will be a lot more costumes and powers to come from the next 20 Islands -- and beyond!

Wow..I remember playing this game when it was first in beta. I have like half this stuff Now. Lmao. I'm 17 now and i remember the good ol day's of poptropica. Man those were the days am i right?

What an honor it is to have the rarest item. I remember having to pop the 3rd anniversary balloon, and that being the tradition in the common room each year! I also got the Hypnotic and several others. I wonder how this list would look nowadays...

I have none lol even tho my acc is old

I'm just so sad that Poptropica isn't like the old days. Now days people can't enjoy Poptropica like we did... I had most of the items on here too, and my account is like 6 years old :3 ily Poptropica, and I will forever miss the old times we had together....

I still have my hypnotic fit! Also the Spy glasses. What I miss a lot in the store is the different bubble gums (Pop Gum). Also I wish I got that Wunder Bubble Tonic when I still could have.
I'm 21, I've been playing the game since it was new (I was 8-9)
Really miss the old islands!!! When they coming back?