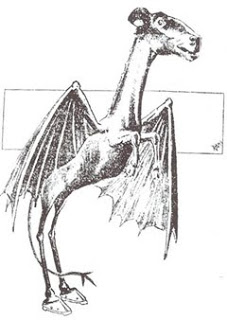 
Cryptids Island is here! Before you take on some of the world's most fearsome mythical monsters, we'd like to tell you a little bit about the legends.

They say that in the deepest, darkest woods of New Jersey's Pine Barrens, Mother Leeds was about to give birth to her 13th child. "Let it be a devil!" she cried in exasperation. When the baby was born it sprouted wings and horns, and flew off into the night.

Since then, sightings of the "Jersey Devil" have persisted throughout southern New Jersey. Footprints, unearthly howls, even direct sightings have been reported. A naval commander once fired a cannonball at a strange creature he thought to be the Jersey Devil, to no effect.

Today, tales of the Jersey Devil are largely dismissed, and the creature itself is thought of as a joke. It even inspired the name of an ice hockey team, the New Jersey Devils. But there are still those who claim they can hear the beast's eerie wail in the night...

Do you believe in the Jersey Devil?