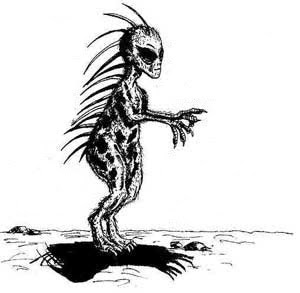 
Cryptids Island is coming on Monday to Poptropica! Before you take on some of the world's most fearsome mythical monsters, we'd like to tell you a little bit about the legends.

"Chupacabra" is Spanish for "goat-sucker," and that's exactly what this creature is said to do. Unlike many cryptids, the Chupacabra is a relatively recent phenomenon. The legend began in Puerto Rico in 1995, when a farmer found that several of his animals had been killed overnight, and the blood drained from their bodies through strange puncture wounds.

Since then, the stories have spread to Mexico and the United States. But accounts of the Chupacabra vary widely: sometimes it is reported to be doglike in appearance, and sometimes, as in the drawing above, as an alien creature that walks on two legs. The only thing that unites all the tales is the creature's bloodsucking behavior.

Recently, a Chupacabra body was thought to have been found, but was proven to be a coyote with mange. So the questions remain. Is the Chupacabra a new, unknown animal? Is it a space alien? Or is it nothing more than a legend dreamed up by angry farmers? Perhaps one day we will know the truth.

Do you believe in the Chupacabra?