I was surrounded. A multitude of black and white striped shirts and pale faces were on every side. It was strange though, for they all looked identical! I don't know how she did it, but she was able to duplicate herself over and over again.

"COPY CAT!" The shout rang out down the street. She turned, as did all of her other clones. They all seemed to jump in unison, like the waves of the sea as they passed Shark Tooth Island. Almost instantly, a chorus of screeches erupted from the crowd that nearly shattered the lens of my poor camera.

"RATS!" she screamed, as the little beasts scurried around her feet. A man was off in the distance, laughing as he watched his army of rodents torment all of the copies of his victim. Thanks to their little skirmish, I was able to get away without too much trouble.

I walked into the newspaper building that was nearby. I had been there before, so it was nice returning to a familiar place. Here I met Shifty Scorpion. He was shifty indeed! Trying to get a photo of him was terribly difficult, but I had to photograph his interesting costume and share it with all of you! 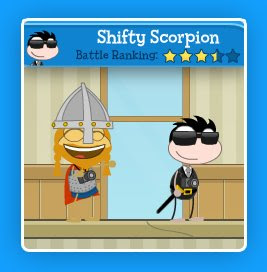 Keep your eyes open! You could be the next Poptropican featured on Snapshot Sagas!