Dr. Blandston is wreaking havoc on Goofball Island! More and more people from the goofy island are being blandified. Can you stop the dullness from taking over before it’s too late? 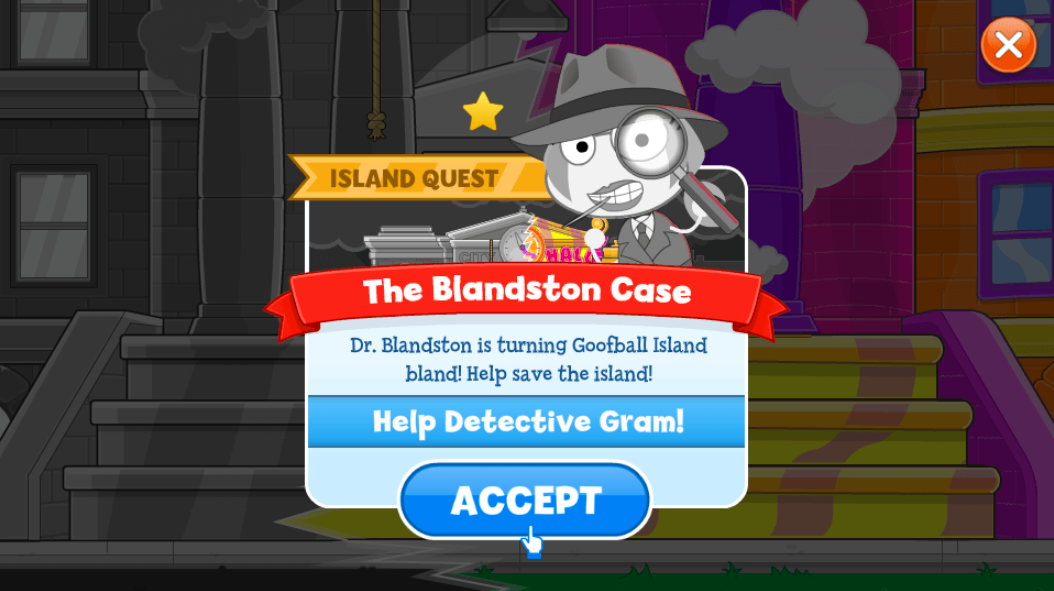 Half of City Hall has been blandified! Detective Gram instructs you to search the building for any clues Dr. Blandston might’ve left behind. Explore Goofball’s City Hall and speak with as many Poptropicans as you can!

In the Mayor’s office, there are two items that might be useful to Detective Gram’s investigation: a broken mystery device and a matchbook from the Crazy Club. Hurry back to the detective and mayor to show them your findings! 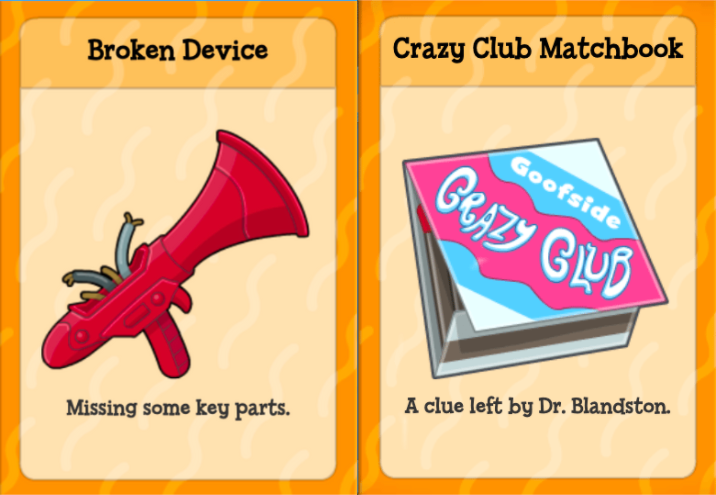 After inspecting the items, Detective Gram’s very impressed with your sleuthing skills. You’ve been assigned to the investigation! Gram offers you the case’s suspect files detailing Goofball Island’s suspicious citizens that might be involved with or disguising themselves as Dr. Blandston. In the files, there are 6 people suspected of being Dr. Blandston: Detective Anna Gram, Mayor Naise, Jumpy Spinner, Bosko Oskob, Billy Bob, and you! 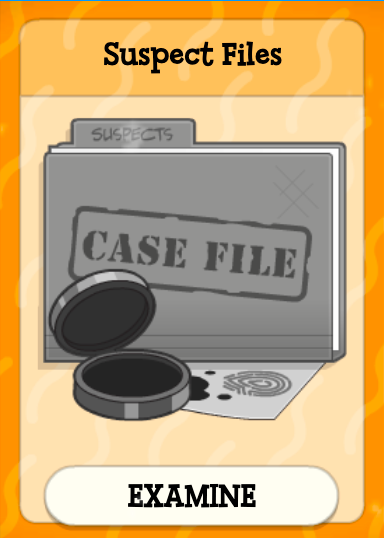 Now that you’re in on the investigation, Gram’s off to search for more clues! In the meantime,it's your job to collect the 4 remaining thumbprints to complete the file, minus yourself and Detective Gram’s. After locating and getting each suspect’s thumb prints, find Detective Gram in her room in the Dreary Building – Room 7.

Before you leave City Hall, ask Mayor Naise for his thumbprint. He’s happy to oblige with the investigation. Easy peasy. 1 print down, 3 more to go! Jumpy Spinner can also be found in his office in City Hall. Head upstairs to the top floor to the right most room. Once you’ve found your way, Jumpy Spinner’s willing to comply with the investigation… under one condition. Jumpy Spinner wants to make sure you have the island’s best interest in mind. In exchange for a quick quiz on Goofball’s history, the newly bland city manager will give you his thumbprints. For a brief history lesson, take a look around the Mayor’s office right next door. The open book on the floor explains Goofball Island’s history – just what we needed! Luckily, the book’s author provides a TL;DR summary of Goofball’s history. Read the passage and return to Jumpy Spinner’s office to begin his quiz. 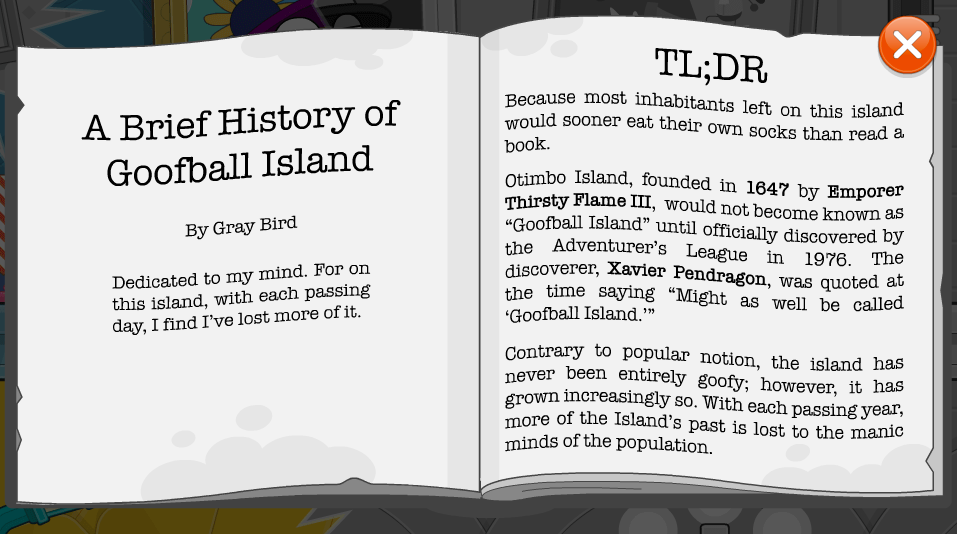 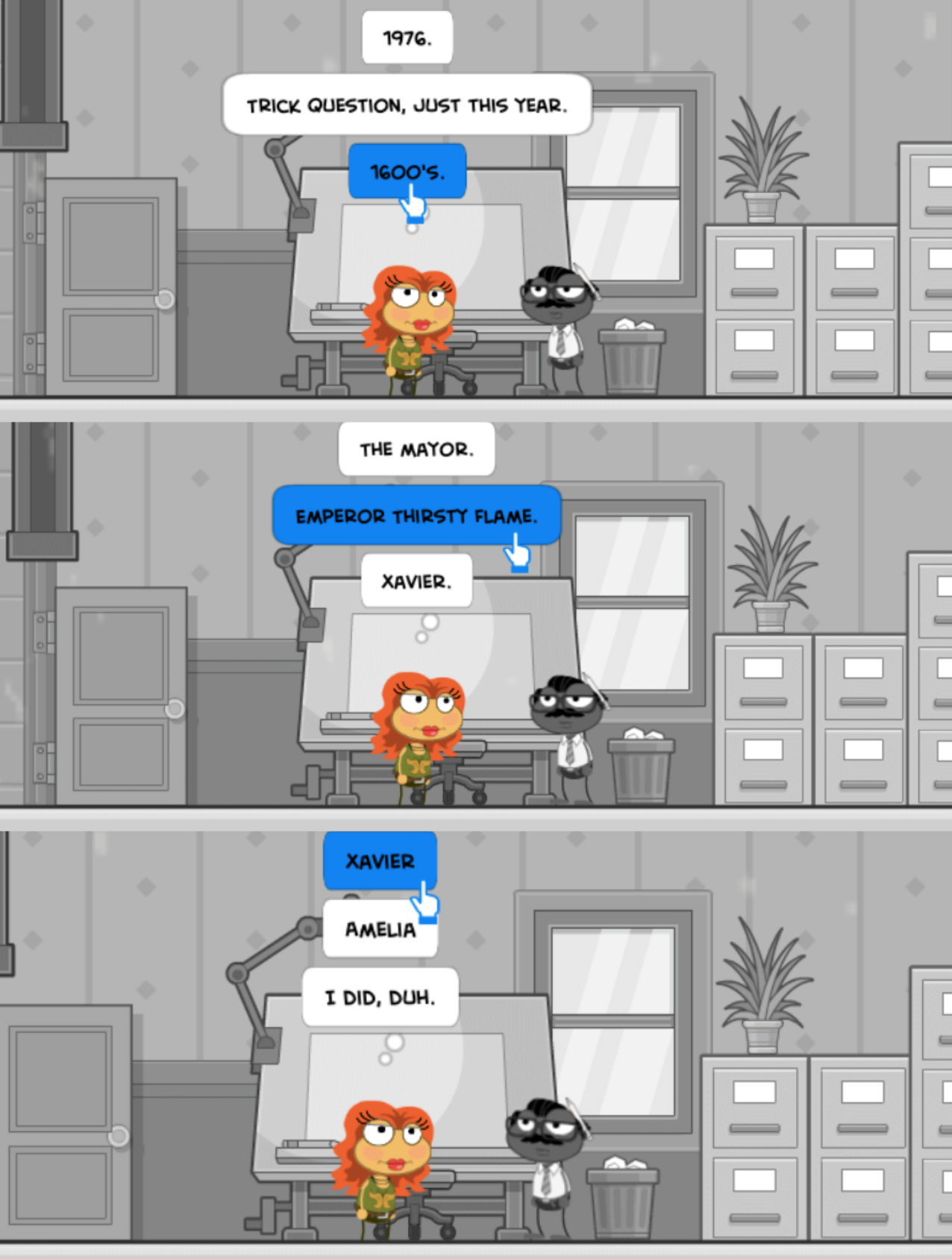 After correctly answering his questions, Jumpy Spinner’s convinced you’ve taken the time to acquaint yourself with the island’s history. In return, the bland city manager holds up his side of the bargain and presents you with his prints. 2 down, 2 to go!

Goofside is a charming and welcoming area, full of bright colors, interesting shops, and peculiar people. Immediately, you come across a goofy citizen trying to break open a pinata. Click on the pinata to drop it down. Surprise! You’ve earned a pinata costume reward! 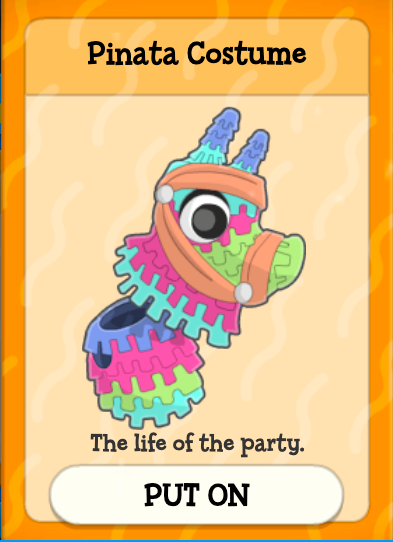 Further down the street, you come across a familiar Poptropican – Bosko Oskob. Ask him for his finger print. Bosko asks to try a joke out on you before he hands his thumbprint over. Who in their right mind could say no to him?! 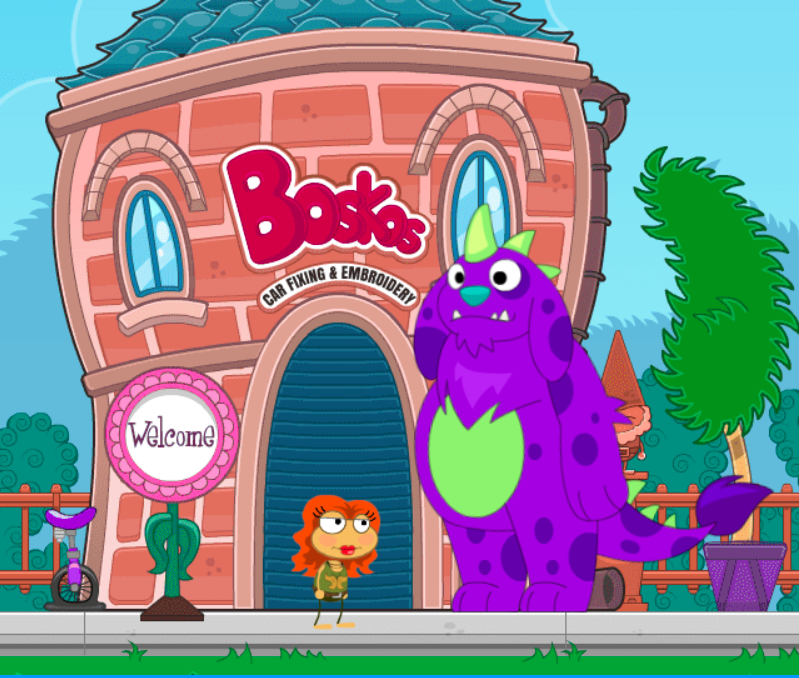 Your first attempt at entering the Crazy Club is likely unsuccessful. In order to get inside, you have to look the part! Put on the pinata costume from your quest inventory and voila! You’re in!

Inside the Crazy Club, talk to the clubgoers about the Blandston case to learn more about the blandifying doctor. Most importantly, Bobby Bill is on the dance floor near the DJ. He’s not going to give up his finger prints without something in return. Bobby Bill’s challenges you to a Freaky Dance Off in exchange for his prints. You’re on, Bobby Bill! 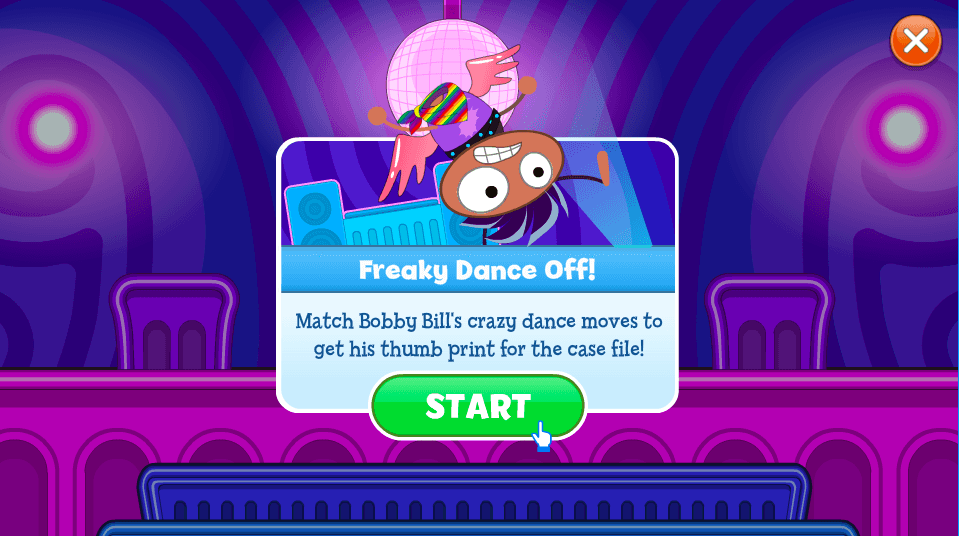 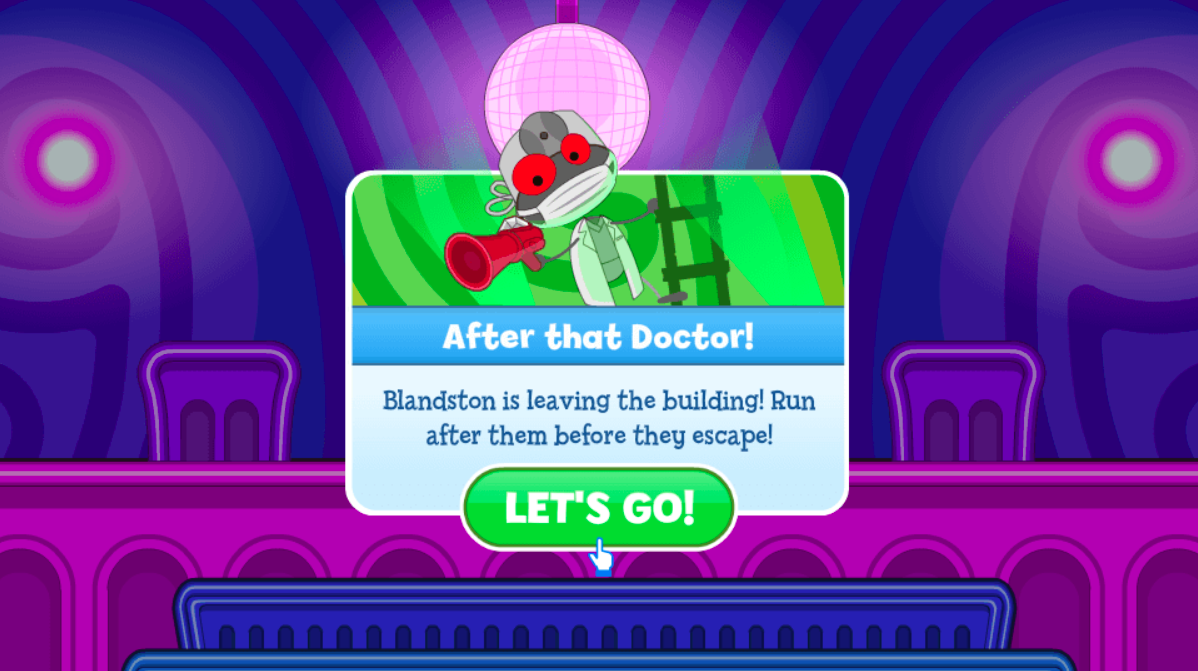 Before you can capture Dr. Blandston, the platform gives out beneath them. The masked surgeon falls from the catwalk onto the stage. It’s time to see who’s behind the mask… 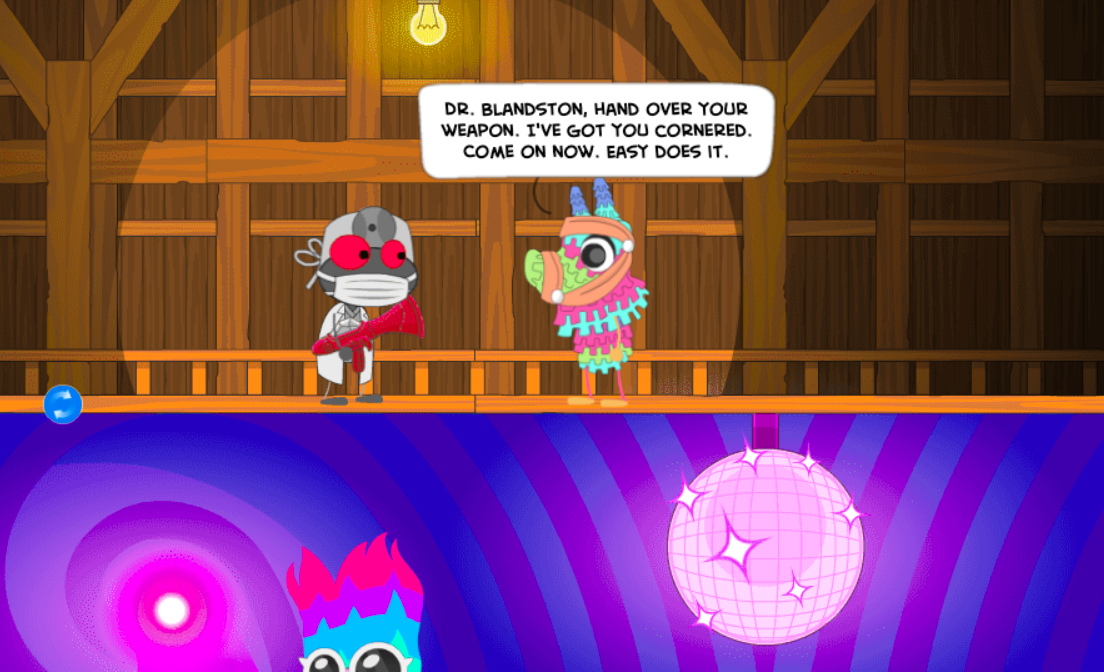 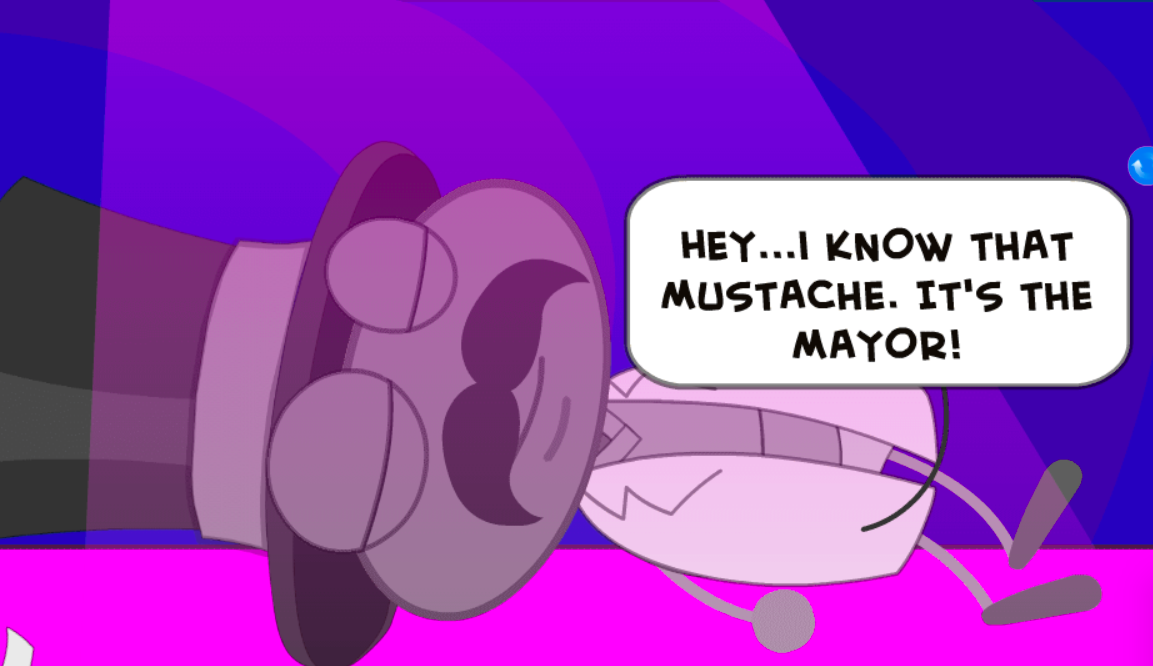 It’s MAYOR NAISE?! Let’s take him to Gram – she’ll know what to do with him. Tie the mayor up, he’s officially in your custody.

Outside the Crazy Club, with the Mayor in tow, something’s terribly wrong. Despite having Mayor Naise beside you, Bosko’s blandified right before your eyes! There’s MORE THAN ONE Dr. Blandston?! Bosko seems fine, albeit dull as can be. And he has a gift for you! Apparently, goofy Bosko left himself a reminder to give you an item – a leaf blower. Who knows when this might come in handy? Thanks Bosko! 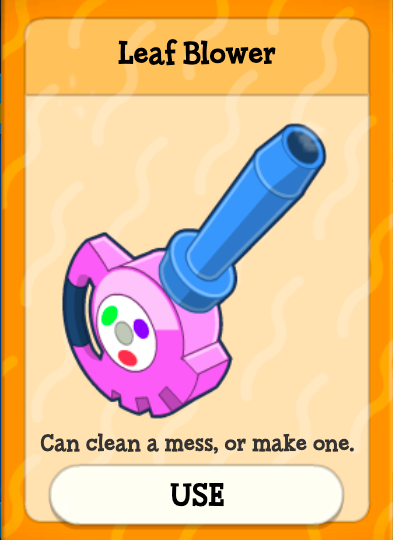 Run to the left past City Hall onto Dullsville’s drab Mainstreet.

Dullsville is fittingly named, given its bleak appearance and film noir filter. At this point, you should have found the missing thumbprints from the suspect files. If you don’t, complete the files before speaking with Detective Gram. Pass by the Dusty Crust Bakery and Dullsville’s subway station to enter the Dreary Building. Gram’s in Room 7; you can either use the stairs or the elevator to make your way there.

Once you’ve found the detective’s room, enter and prepare to unveil the Mayor’s role in the Blandston case. Inside, Gram is half goofy, half bland. There’s been a break in! Use the investigator’s finger print kit to find any remaining prints and compare them to the ones on file. 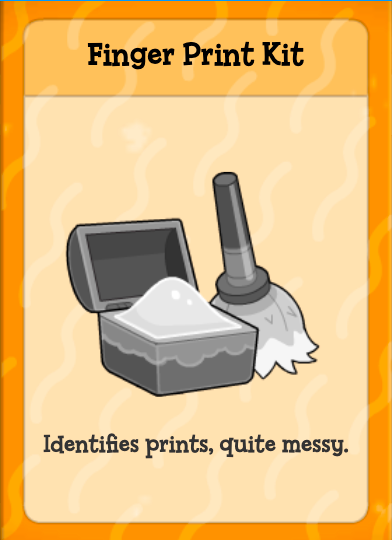 We have a match! But… the only prints to be found are the detective’s. In your haste to identify the finger prints, Gram’s fled the scene! She’s on the move! Follow Gram out the window and down into the subway station. 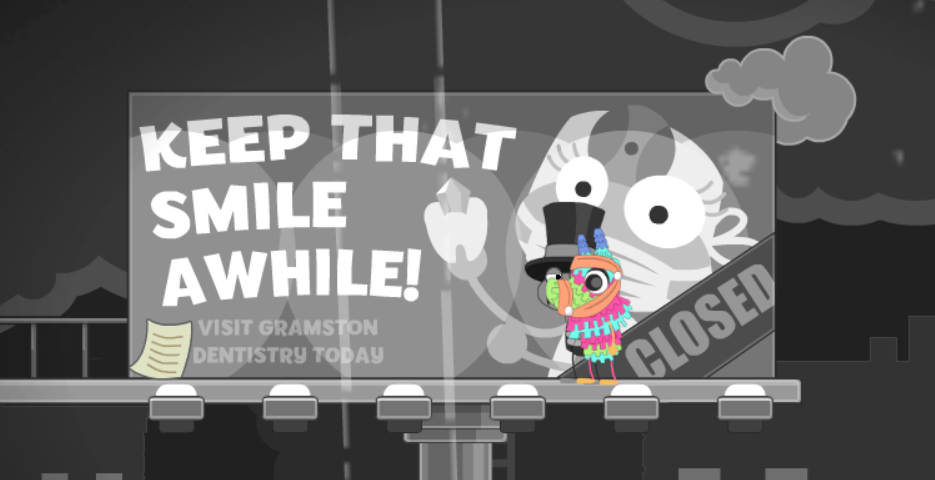 Stop to inspect the paper left behind on the billboard outside the Dreary Building. It’s a page from a dentist’s journal – Dr. Gramston’s journal?! 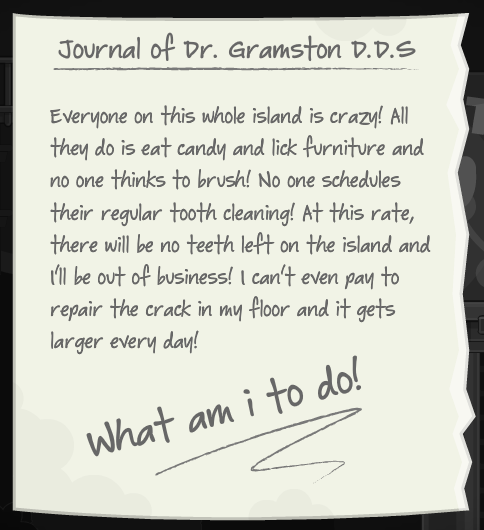 What could this mean for the investigation? Are Detective Gram and Dr. Gramston related?

With the Mayor still in tow, navigate the underground station. Keep an eye out for Detective Gram-turned-Dr. Blandston. You can catch a glimpse of her lurking in the shadows, but she’s disappeared before you can get a better look.

Travel deeper into the subway station. Before entering a tunnel headed away from the train, you spot another page. 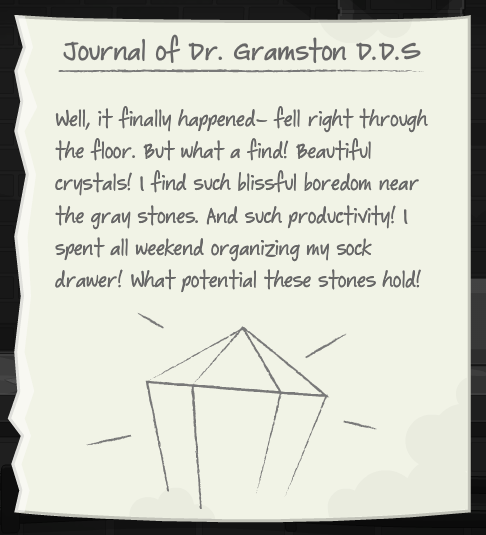 Could the stones be causing the island’s blandness? 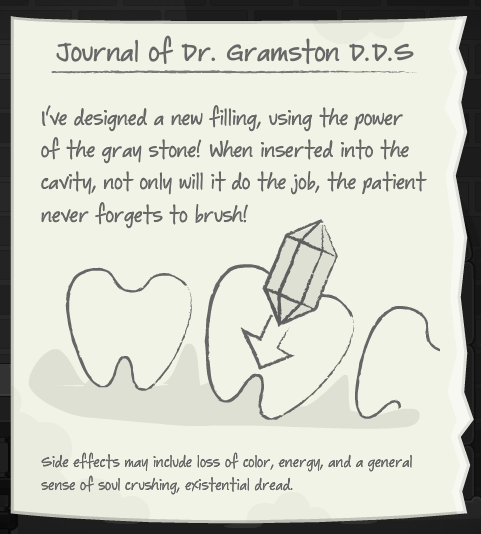 It’s starting to make a little more sense! Gramston’s found a way to weaponize the gray crystals and blandify the island’s citizens.

Travel into the tunnel and descend into an underground passage. Out of the darkness, you can make out a dentist’s office! There’s a massive hole in the floor, leading further down. On the right side of the office, Dr. Gramston’s left behind more pages from her journal! 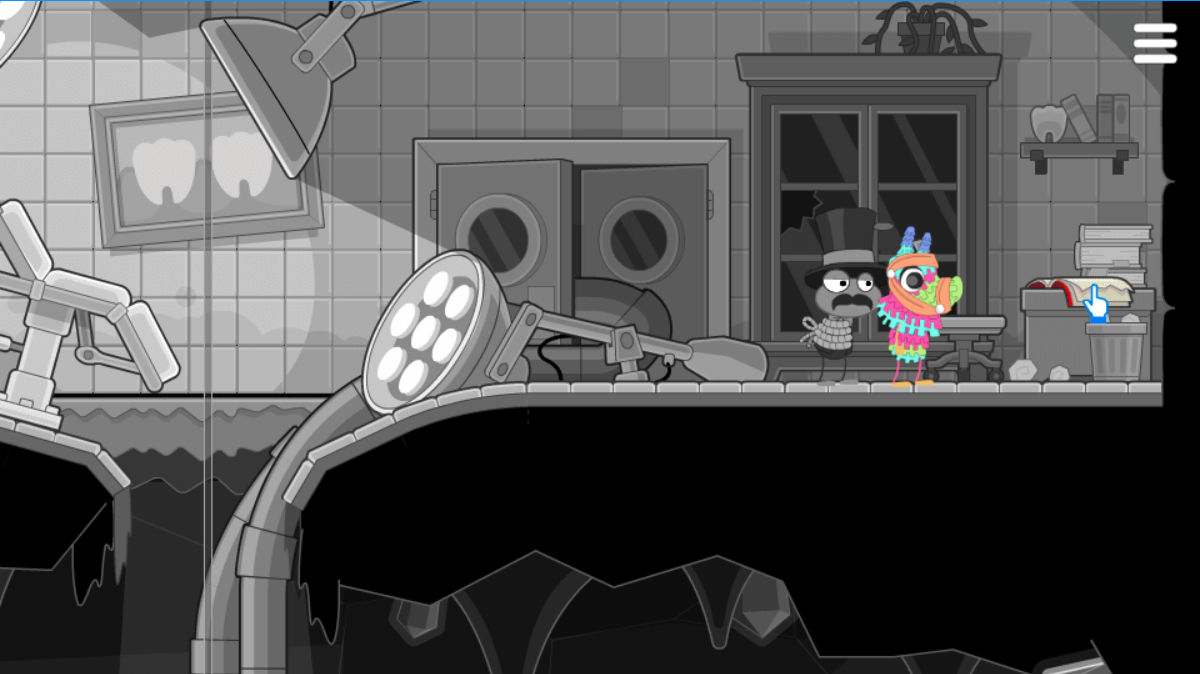 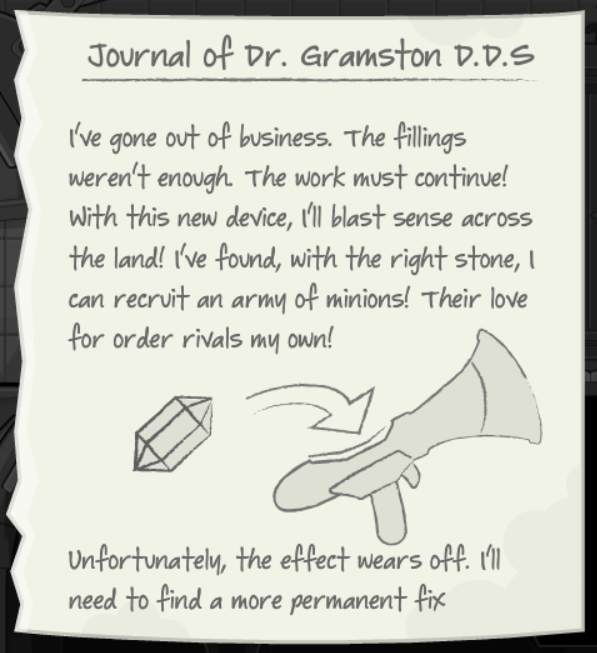 Gramston’s the mastermind behind the entire army of Dr. Blandston’s?! Although it’s a temporary fix, Gramston’s blandify device is destined to turn the whole island into a dull and dreary place. 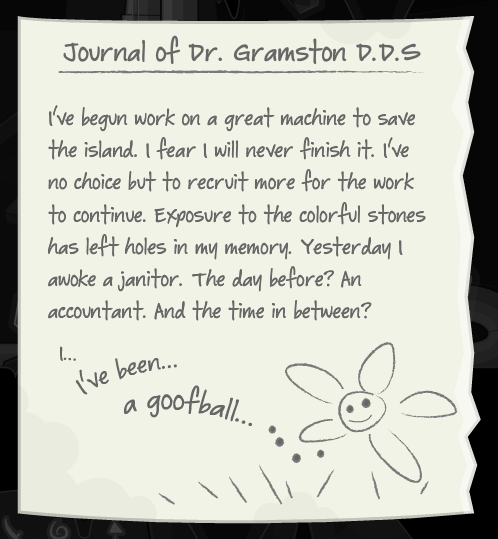 The colorful crystals are destroying the dentist’s mind. No longer is Dr. Gramston just a plain, dull dentist. Her goofiness is taking over!

Below Gramston’s office, there’s a hidden cavern filled with crystals! Some are vibrant, while others are bleak and unimpressive. These must be the stones Dr. Gramston’s used to power the blandify device! Not only that, but mysterious hieroglyphics cover the cavern’s walls. It might look like to gibberish to you, but the Mayor’s able to translate. 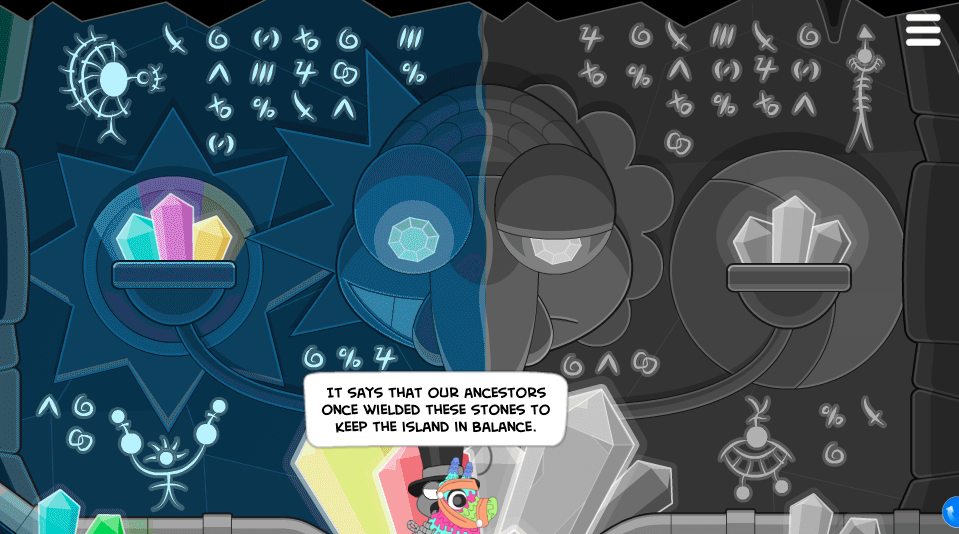 Continue heading right and pick up one of the grey crystals. It’s a perfect fit for the blandify device! Dr. Gramston has to be around here somewhere. Drop deeper into the dark maze and take out the leaf blower Bosko gave you. This should flush her out from the shadows!

Aha! There she is! Now that you have her cornered, use the blandify device to turn Gramston into Detective Gram again. But watch out! She has one too. Avoid her blandifying rays and zap her before she gets the chance. 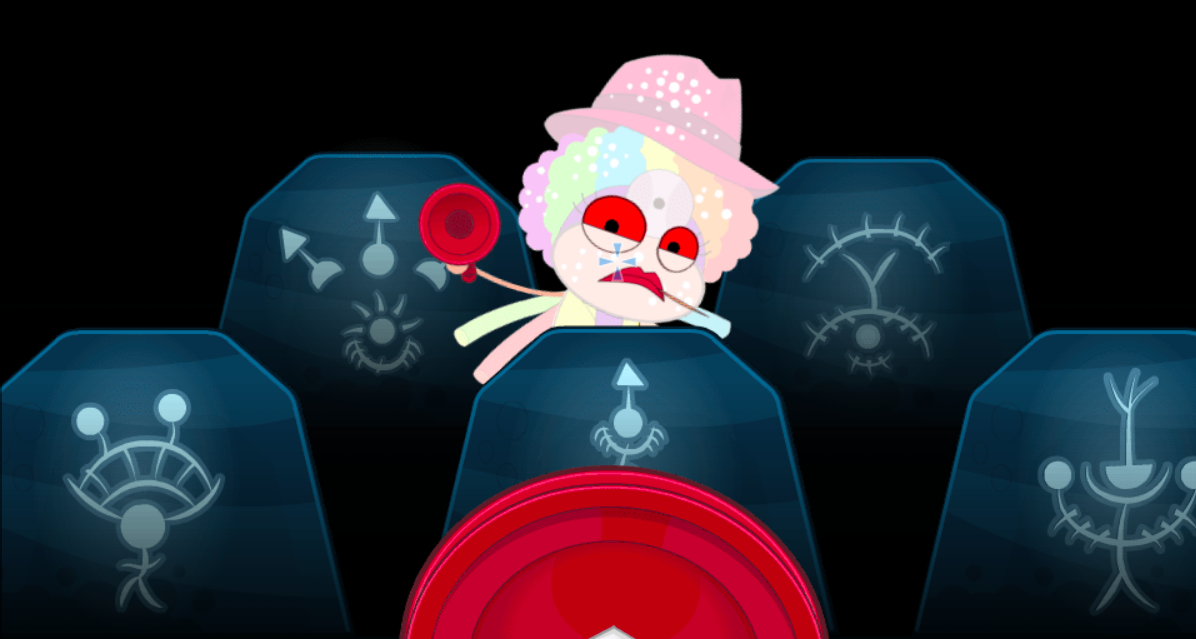 Finally, we’ve got her! In a daze, Gramston’s become half bland and half goofy. She tells you to use to the finger print kit on your blandifying device. But there’s only one set of prints… YOURS! There must be a mistake! 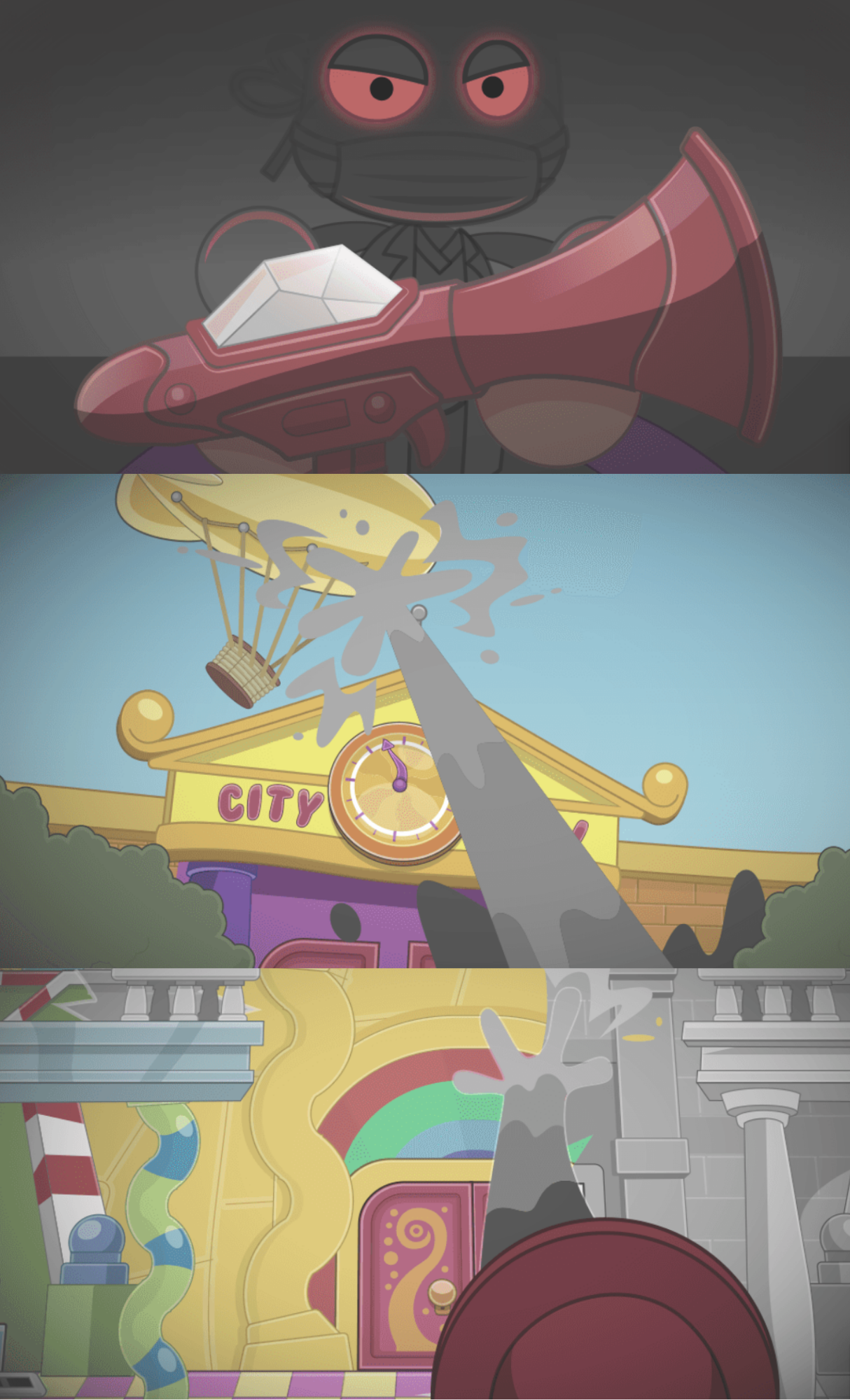 You’re a Blandston! The vibrant crystals have taken a toll on you as well.

But there’s no time to waste! People will continue being blandified if we don’t intervene. The nearby machine can harness the stones’ power to warp the entire island. The decision is up to you. Goofy, balanced, or bland – what will it be? 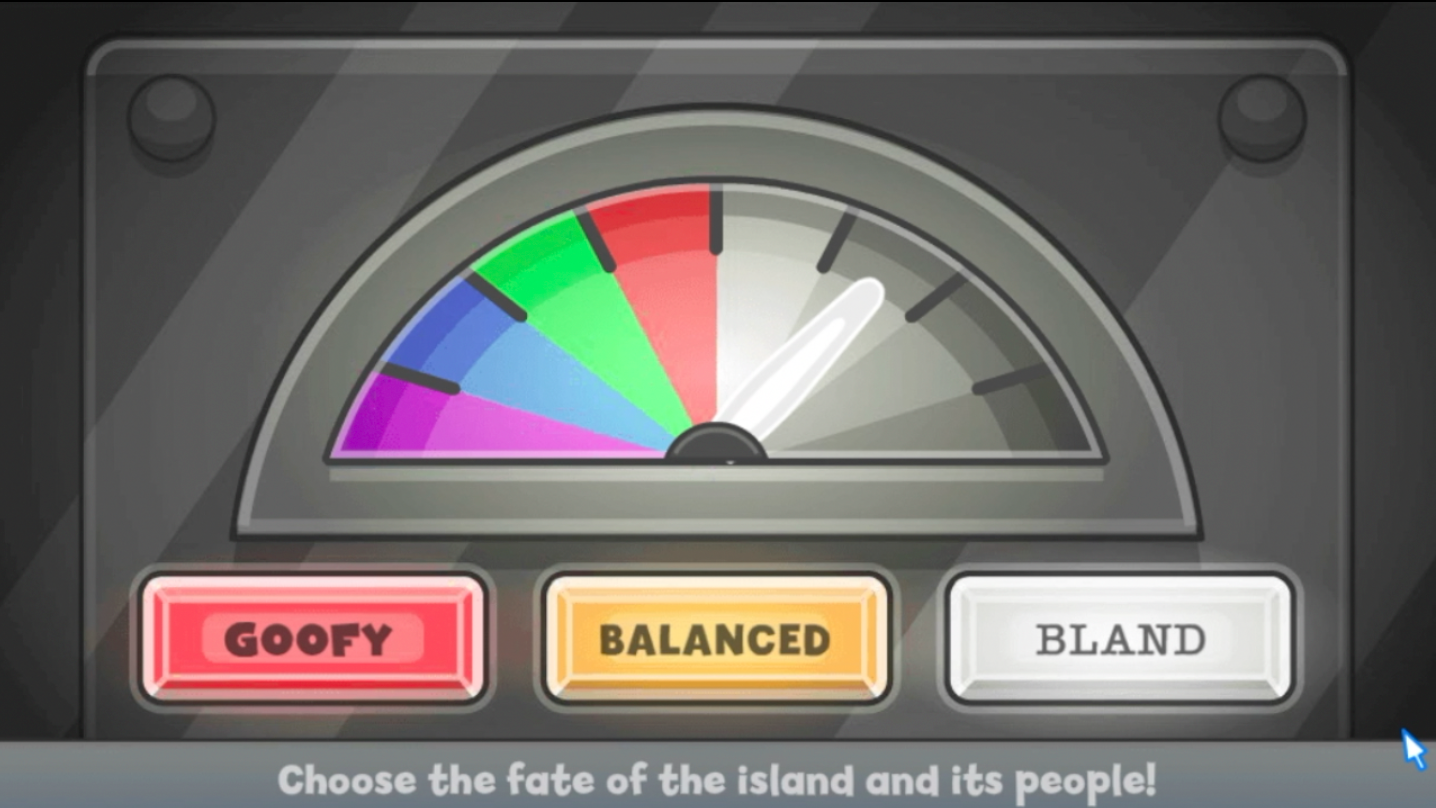 Congratulations! You’ve protected the island from being overtaken by Dr. Blandston's and rightfully earned your Goofball medallion! Take pride in being Goofball Island’s hero. 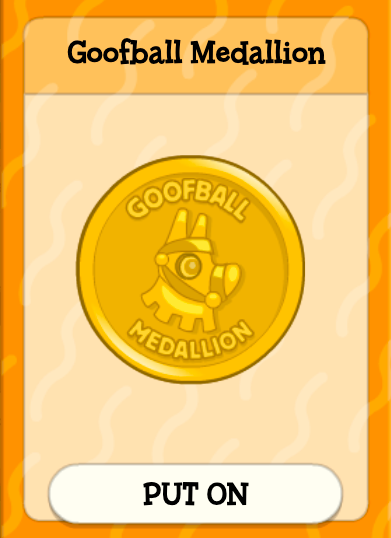 If you’re curious about the alternative endings, you can easily choose a different fate for Goofball. After completing the island, the next time you return to the island, you’ll be transported to Dullsville, where you’re in hot pursuit of Dr. Gramston. Follow her into Dullsville’s subway station and finish the final scene to select another ending! 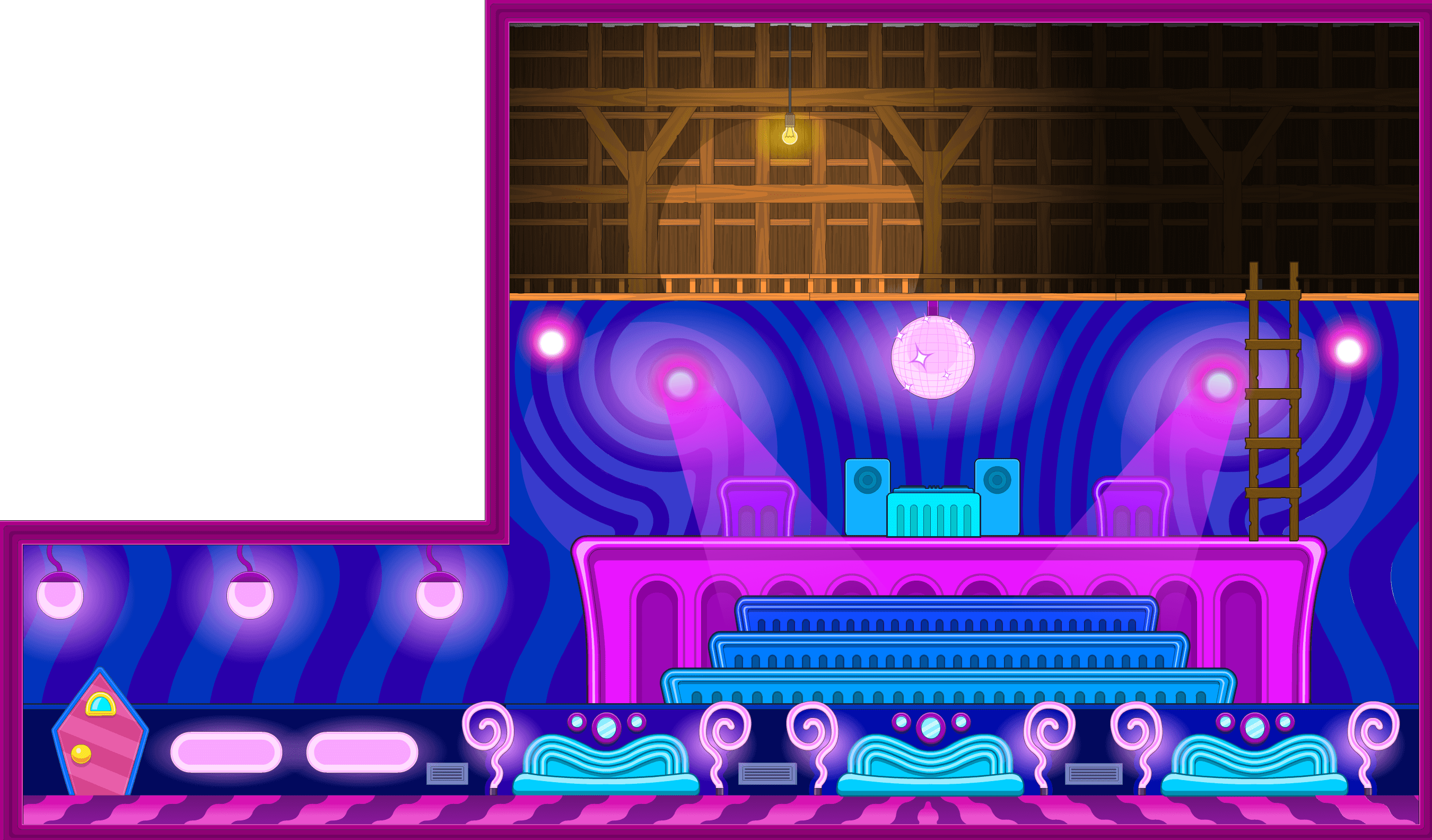 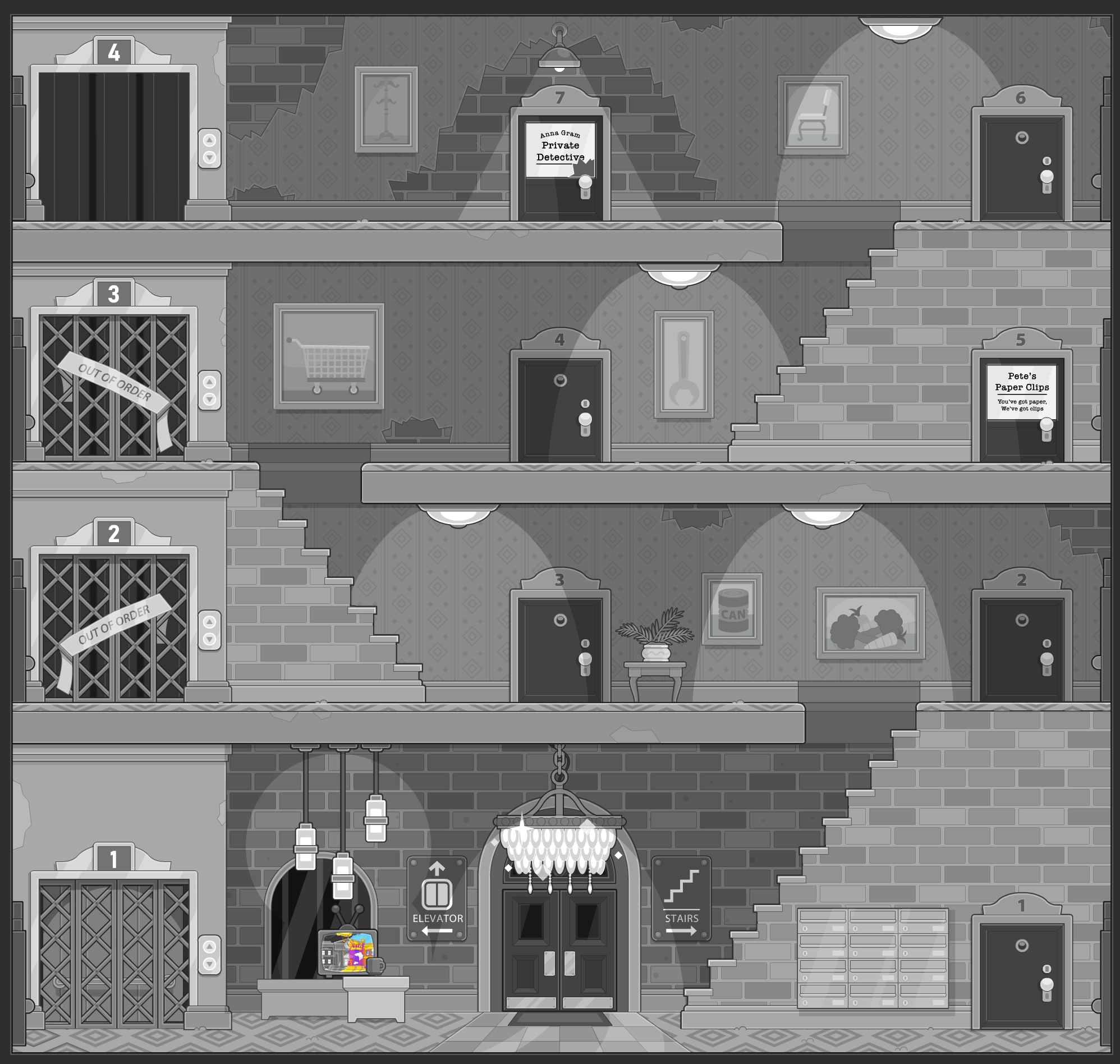