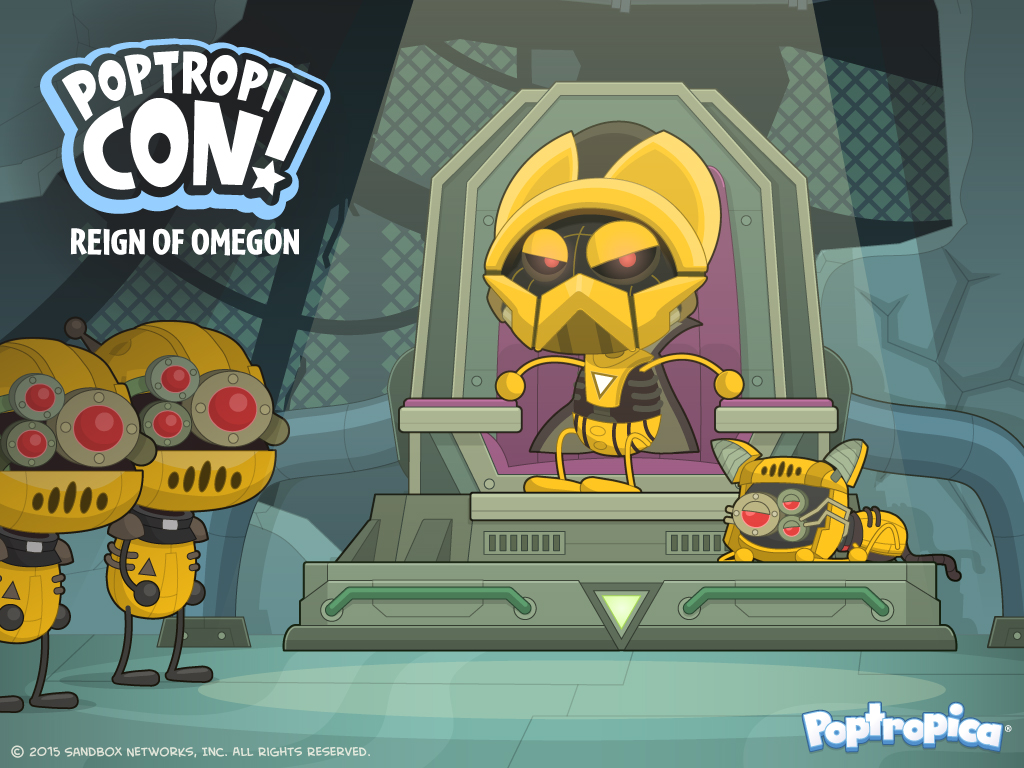 PoptropiCon, Episode 3: Reign of Omegon is NOW AVAILABLE! The third and final island installment has been converted to its former glory. Starting today, members can begin the epic conclusion of the PoptropiCon trilogy on desktop and mobile!

“Omegon has taken over and he won’t stop until he’s transformed everyone into a hench-bot. Only you can acquire the powers of the Mighty Action Force and save PoptropiCon!”

You’ve found a way inside Poptropica’s hottest event of the year. You uncovered the most anticipated film’s top-secret costume design. Now, your toughest challenge awaits. Are you ready to resist the Reign of Omegon? 🤖

Channel the heart of the Mighty Action Force heroes and hurry to the map! The fate of the world depends on you, Poptropicans! 🌎

where is the baron?!

Apparently it's as of right now for members only (Or when I tried playing it, it said it was for members only).
The real question is, who actually is getting memberships anymore?

what is going on?!the baron was gone last month and now the darn air ship is not here!what is happinig?!

The Airship hit a bit of headwind, but will be arriving soon!

First of all, this is probably an automated response, not from the creators. Secondly, please feel free to release old islands to other players, because the players feel really left out like me. Thirdly, people are starting to leave because you make them pay about $20 a month, for a membership so they can play old islands like they used to. Fourthly, would you please update ' Poptropica Worlds', because people especially stopped playing that game, too. Fifthly, would you post a blog where actual creators are? Sixthly, people also are starting to leave the game because they don't have enough time because they have school or work. Lastly, I think when the old islands are released and you make them members-only people get upset. These islands are for everyone. I do recommend doing these suggestions I put to make others play this game. One last thing, Please recommend Channels like ThinkNoodles, Invisible Ring, and other channels to players. And encourage them to post more Poptropica. I have been playing this game since I was 7 and you recently disappointed me about this game. Add links and more content to keep others from not waiting long.

Yes to EVERYTHING you said. Especially the one about the old islands being members only. That’s STINKS. Also they should stop animations on people. Amelia is fine but everyone else should have the classic Poptropica kind of code not animations.

Noisy Wolf,
I'm with you on the member ordeal. I love poptropicon (I handmade mighty action force cards to play with my friends), it's in my top favorites, and the last one, my favorite one, is now only avalible to members, when I saw that, I was crushed. But then, I didn't want to be too crushed, so I conviced myself that the poptropica creators just would like to earn some extra money to keep the game going, which if some islands I cannot play, is a sacrafice that I am willing to take. But I love poptropica, and I miss not being able to play all of the islands. The poptropica creators worked hard on poptropicon 3, and I will never get to see it unless I pay 20$ for only a month or whatever it is. 20= 4 cartons of nice ice-cream...
I aprectiate the creators of poptropica and all the efforts they put in, and I'm grateful that at least I can play some of the islands.
-Anonymous

Don't worry! The airship will come back on October.