Dizzy Feather here with part two of my fanfiction (read part one here). I added something at the end for you readers, now back to the tale...

We see a lifeboat go through the portal. The boat docks, and the Pink Knight steps out but she looks different, For one thing, she looks differently animated, for another instead of her uniform she is wearing a metal jacket, blue jeans, and dark pink sneakers. She looks at her hands and wiggles her fingers. 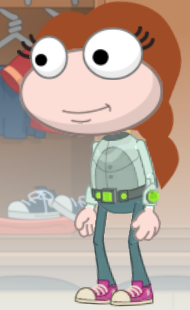 Child, you act as though you've never had opposable thumbs before.

The Screen fades to black and the word "Next day" appears.

The Pink Knight is standing in Space Station H.A.R.E. She sighs and looks out the window.

A hand is placed on the Pink Knight's shoulder and she is spun around. Once she is we see that the hand belonged to Dr. Hare.

You're not supposed to be here! Why are you here?

I'm here because I need your help.

My help? Ha! Why would you ever need my help?

Because you are the only person who is in this portal, who isn't brainwashed at this time.

What about the other heroes that were sent in?

There are only three in here at the same time, one of the others has been missing for two days, and the other is literally sightseeing.

You seem like the normal noble hero, but you're also just a kid, and you seem a little bit naive. So I gonna take it easy on you.

You see, there are rules to the whole villain-hero thing. One of the main rules is, that villains and heroes never team up, if they do the odds of the hero being betrayed by the villain are extremely high.

I know, and that's why I'm not teaming up with you. I just need you to help me locate where a video was sent from.

You came to the wrong guy for computer help, I focus more on mind-control and stuff like that.

But can you do it?

The Pink Knight pulls out a crisp tan filing folder and opens it, she reads for a few seconds then looks up.

What does it say?

It says, Dr. Harvey Hare. A top-of-the-class student at the N.I.S.S before an experiment fussed his brain with a bunny's, who puts bunny instead of rabbit?

Anyways, like I was saying, Personality: insane/ bossy/ smart, seriously who wrote this thing?

She flips through the rest of the file, as Dr.Hare gives her a very annoyed/impatient look.

Height: five feet-ish, Crimes: Kidnaping, forcing people to work, trespassing, theft, economic sabotage, business sabotage, times five, and whatever building a giant robot in the shape of a bunny that is designed to mind control the planet would be called. That's all it says.

Now, The area around the portal is restricted, you repeated your previous crimes over here, and you've got in the way of maintaining the peace.

It's what we call getting in the way of heroes trying to stop a different villain.

Also, just so you know if he doesn't hear from me in the next 24 hours he's going to do it anyway.

The screen fades to black.

Want to be in this Fanfiction? Just pop in a quick character outline in the comments of this post please get them in before the 23th (note that there will only be one winner this time and it can be anyone who completes a character outline).

Here's what I need from you to be able to possibly put you in:

I will not contact you, so what your Poptropican says and does in my story is completely up to me. But I'm pretty nice to every character in my Fanfictions.

See you next month,

Hope everyone enjoyed this.
Also I started my own Poptropica fan blog if anymore wants to check it out, dizzyfeatherpoptropicablog.Wordpress.com
I’m getting ready to write another fan fiction that will only be posted on there.

Shameless self promoting aside, I’m looking forward to seeing all the character outlines and I would love to hear your thoughts on this part of the story as well.

Hi Dizzy Feather, nice fanfic. So I was wanting to be involved in the fanfic.

Sounds like a great character. Thanks for having interest in being in this fanfic.

Interesting character, also don’t worry I take each character outline into careful consideration, if you don’t make it into this fanfic, I do plan to write more fanfics, and add at least one of the readers in each one, so you are welcome to try again on some of those if I don’t choose yours this time around.

Oooh sounds fun! I hand over Gwendolyn to you, treat her nicely please.

Name: Gwendolyn Risk, Poptropican name is Spotted Thunder. Feel free to use either one.
Username: SH54267, although I'm pretty sure you already added me as a friend lmao
Role in fanfic: Hero
Unique touches: Owns a pet owl named Merlin, motivated by her desire to be the greatest adventurer of all time, just like the heroes and adventurers she looks up to.

Feel free to do whatever you want with her, it doesn't have to be accurate to Storm's Calamity's version of her.

I do believe you are on my friends list already.
Thanks for the intriguing character outline, and I promise you if I choose her, she will be treated very kindly.

Name: Moody Typhoon (Though I prefer to be known as Stormcloud)
Username: iamnoahr
Role: Impartial, I play tricks on everyone
Unique Powers: Genie, Talks to animals, Can become a cat
Job: Covering up the excistance of the poptropica devs

Interesting character, but what are Poptropica devs?

The developers of the game

I am very interested in the fanfic here's my character.
Name: Meghan Hunter
Poptropica ID: Noisy Wolf
Role: Hero from the future
Power: To jump through time, super strength and super speed
Username: Ready2rock573
Many Thanks, Noisy Wolf🥰😄

Glad you like my fanfic! Thanks for the interesting character outline.