What a whirlwind of a year it’s been! Where did the time go?! 2021 was dubbed the “Year of Stories.” The stories we shared have covered everything from fairy tales, sabotage, colorful contrasts, and reignited rivalries. But before we look forward to the next chapter, let’s take a trip down memory lane and revisit some of this year’s adventures!

2021 beckoned tons of new gameplay! Specifically, two new dream islands joined the map! After winning 2020’s Dream Island Contest, Fairy Tale Island and Goofball Island were brought to life, crated on the basis of your fellow players’ original ideas. With the new releases, many fascinating characters have joined the ranks among memorable characters: Rumpelstiltskin, Cinder, an emotional Prince, Mayor Naise, Dr. Blandston, and Bosko (to name just a few). As for the last installment of the Dream Islands, look to the start of 2022 for Secret of the Jade Scarab Island updates and sneak peeks! 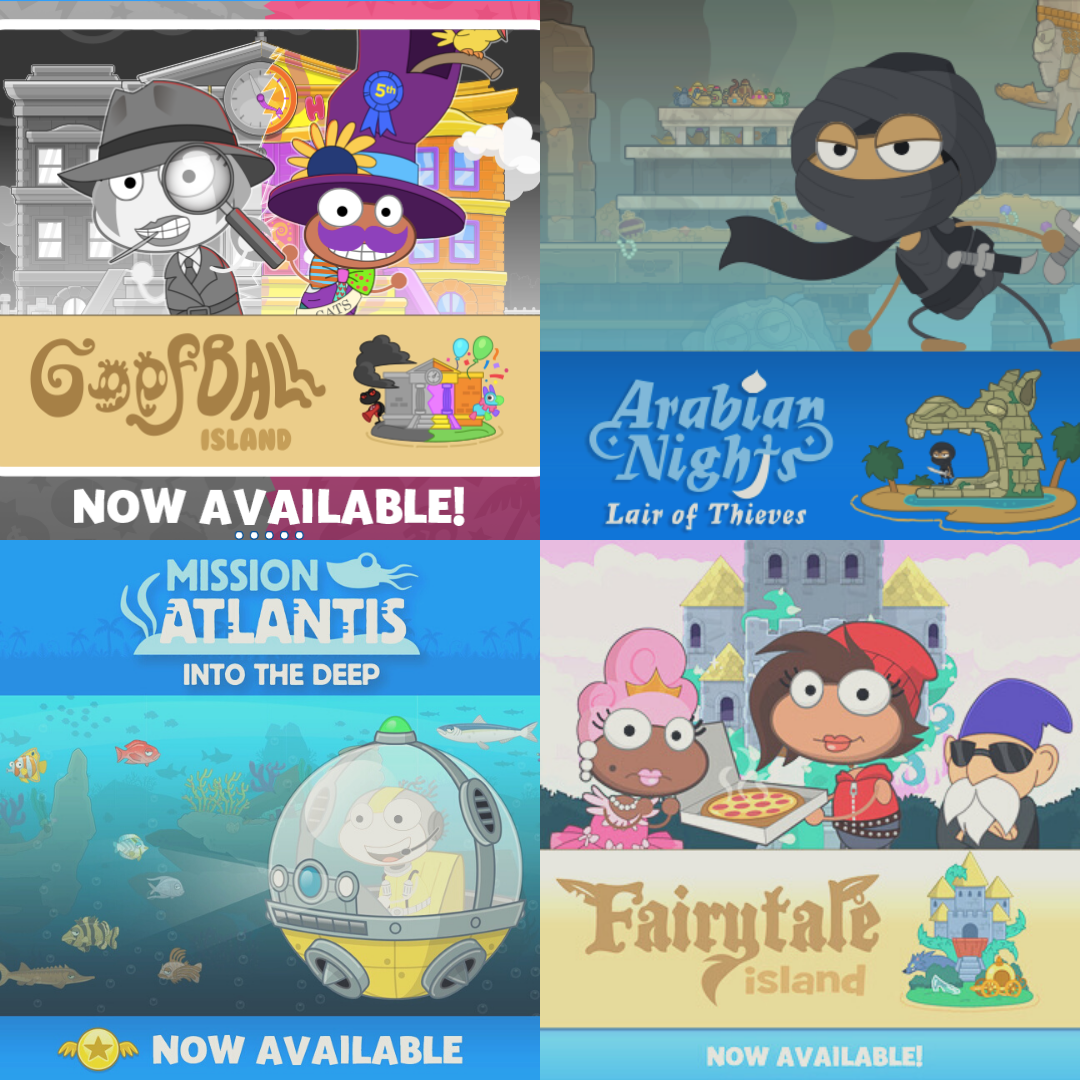 Alongside the new experiences, several episodic islands have also been ported to Haxe! Recently, Mission Atlantis: Into the Deep and Arabian Nights: Lair of Thieves have made the transition and are now available to members! It’s incredible to see them resurface after 2020’s Flash Flood. As for a current update, there are more episodes in the process of conversion at this very moment! It’s worthwhile to note that we recognize and share your frustrations. Although the act of converting the older islands is long and difficult, we’d like to thank you for your patience, Poptropicans. Your understanding is greatly appreciated! If you’re hoping for hints about the next rerelease, there will be much more news to share in the coming weeks! 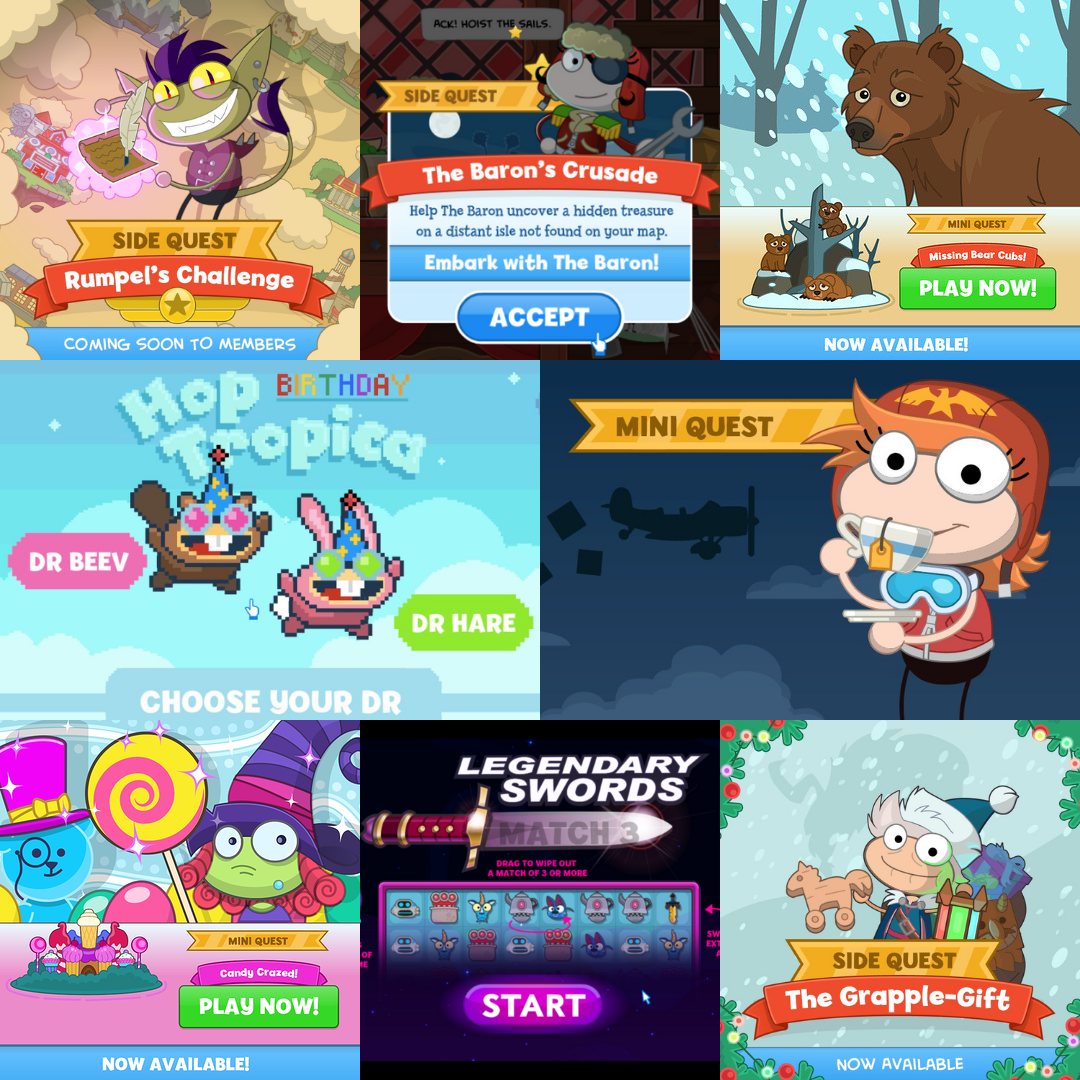 Of course, a handful of new side quests have popped up around the islands! The new quests have taken us on a deep dive into some of the lore surrounding Poptropica’s leading ladies (Amelia’s mini quest and the Baron’s Crusade) and a certain cunning, magic man (Rumpel’s Challenge). These quests have revealed an enormous amount of information, but it seems that there’s often more questions than answers. Rest assured; this won’t be the last of these stories… Perhaps this is just the beginning.

Not only that, but we’ve also ventured off the beaten path to offer a helping hand to other Poptropicans. The Lost Cubs event ended with a happy ending as Mama Bear and her little cubs reunited on Survival Island. Unfortunately for the Candy Crazed mini quest, let’s just say that story’s end wasn’t quite as sweet. 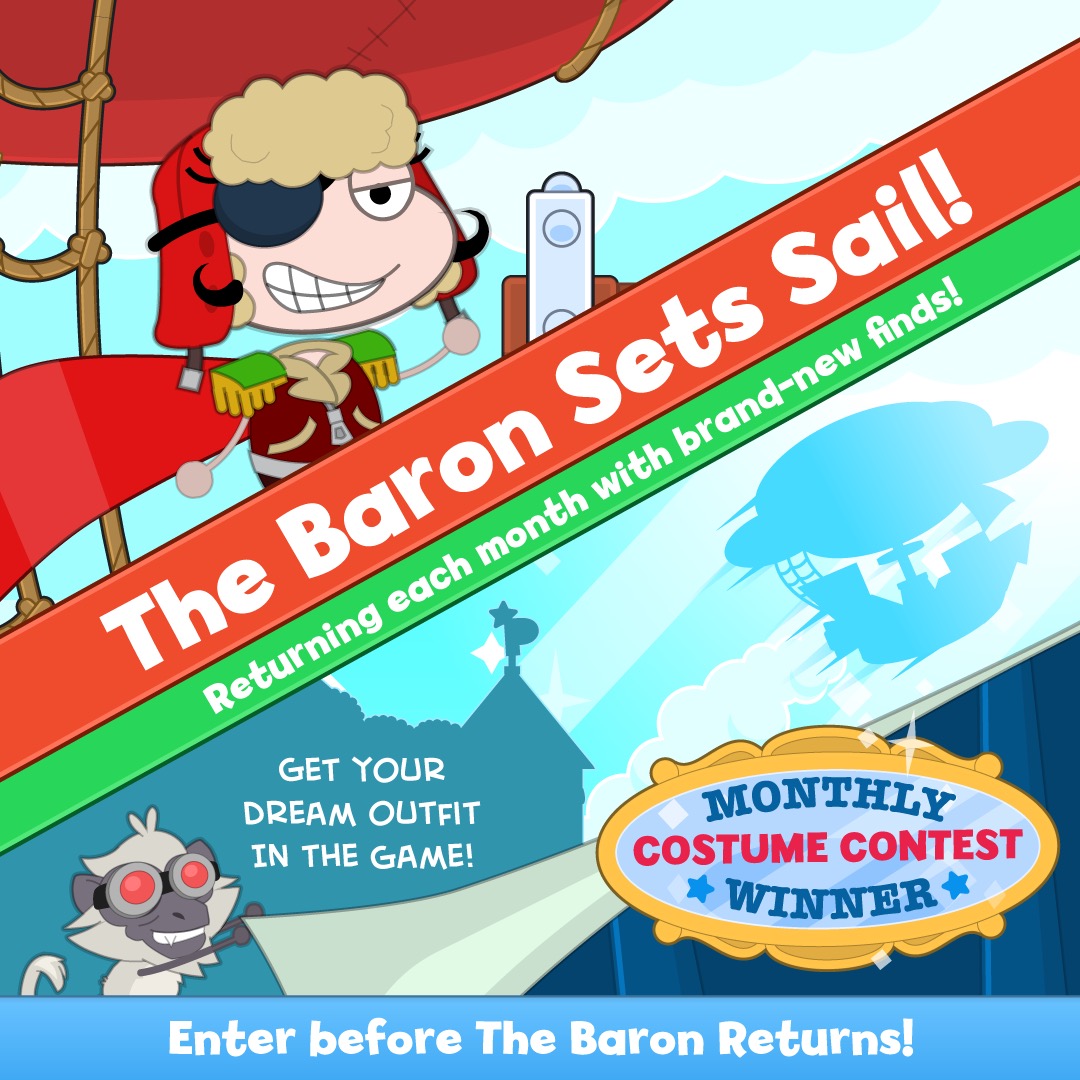 Apart from recent islands and quests, this year also marks the return of the Baron to Poptropica! Nowadays, it’s not uncommon to spot the sky pirate on one of her monthly stopovers to Home Island. She’s even been gracious enough to open her Airship to visitors, giving players the chance to scoop up some of the Cabin of Curiosities’ limited time bounty.

Looking forward to 2022, there’s still so much waiting to be uncovered. The stories we’ve encountered have only just begun. Buckle up, Poptropicans! Unimaginable adventures await! 💫

Since the new year is coming, I think that for 2022, it would be great to have pop tropics as great as it was long ago ( not that it isn't great now ) or to make poptropica better. Every year, a contest should be held to select at least 2 islands that people come up with to be featured in the game. But also, every start of the year, another contest should be held to vote which old islands should come back. ( Also can any players that was around for the old islands tell me how many islands were there in total) Players would vote out of all of the old islands of poptropica and vote at least 1 or 2, ( probably one ) on which island should come back. Whichever island gets the most votes is the island that will come back to stay on the game and be free for all players

( If some have seen this comment before, I am only posting it again because I want Poptropica to see this comment, Poptropica, if you see this comment, please consider what I am saying, but I greatly do love the hard work that you have brought to make this game still great, and I really hope the best for this game in the new year)

^^Y'all, this dude's enthusiasm is starting to infect me 😂
I can't wait for the islands! Shout-out to you guys for taking the time to satisfy our greedy souls (jk :p), and especially all those poptropicans who were patient enough to wait!

Thank you poptropica! It’s nice to know that you guys share our frustration and are in the process of bringing old islands back! When the old islands come back though, can they not have animations? Can we also have the old backpack back, the one where you see your cards floating in a line, the original backpack? And if the store is going to change again, could it be a bit more like the original store?
Thank you for another year poptropica!

I agree the animations just don't feel like Poptropica. I also think that the backpack should have floating cards again!!! I remember when I used to go and pick out my outfit.... it was just amazing! Also, could we please have the costumizer tool come back but not just on Poptropicon island. Like, I want the costumizer tool everywhere so I easily steal {hehe} the outfits that I like. And just one last thing.... could the old islands that are coming back be for non-members too! Or maybe they could be for members for awhile and then the non-members could hve a chance to play too!!!

Thank You soooooo MUCH POPTROPICA!!!!!

Yess! This year was starting off as boring but ended up so bright! There are a few things I didn't like along the way but now I see how much hard work creators put into it. Old islands and starting to come back!! also I totally agree with pink crush

There is a big problem with the way Poptropica is right now. In Classic Pop, each island was its own individual original story. When you completed one island, the story was over and you moved onto the next (unless it was episodic). In the new version, you're making the game one big story. Everything, and I mean everything, revolves around Fairy Tale and Goofball. All you're doing is adding new stuff to the game. The truth is, it's a different game now. You've even changed iconic characters! You changed a chill, laid-back, relaxed adventurer (Amelia) into a little girl who loves unicorns, runs a store, and overreacts about things. In the starter quest, she flails around like "Go after them!!!" and it's annoying. And the Baroness? She's a villain! She's also your first villain if you're a veteran. And yet, in new Pop? Sure, she still hates Amelia, but she lets you into her Airship with cool stuff and acts relatively nice. You're paying your attention to small little details that we don't need features about, when you should be doing what you PROMISED you would do: BRING BACK OLD ISLANDS!!!!!

Not sure if anyone noticed, but even the way our own poptropican moves is different. Our poptropicans used to move faster.
For any new players who don't know what poptropica used to be like and would want to know, keep scrolling up until you see the poptropica logo, tap on it and then there should be a video of the original poptropica. It was very good back in the days.
Happy new year poptropica! Good luck!

The link doesn’t work on the iPad

YESSSS! I LOVE YOU! YOU'RE SO RIGHT! FINALLY, SOMEONE WHO UNDERSTANDS!!!!!!

But it's no use. You can't argue with the creators because they never listen.

Ya I know right. They always say that they are going to bring back old islands but then they either don't or they bring them back for members..... I really want the old islands back. I miss them SO MUCH!!! Don't worry anonymous....I'm here for you. Anyway, Happy New Year Poptropicans!!

Honestly, I think that they should have more to do on poptropica. I mean like when a new island is here, I'm done with it in about 2 minutes. Also, I think that people on different devices should be able to see each other. My sister and I really want to meet up at the arcade and common rooms. And I've heard all about old islands and since I'm kind of new I want to explore them. Please Poptropica read this.

I've heard a LOOOOOOOOOOOOOOOT about the old islands and I want to see them for myself. P.S. I started in I think 2020