Rumpel’s Challenge was recently released as a members only side quest, that picks up where Fairytale Island left off! The side quest begins with Rumpel reappearing on Home Island’s Mainstreet, offering players the chance to uncover the King’s whereabouts. 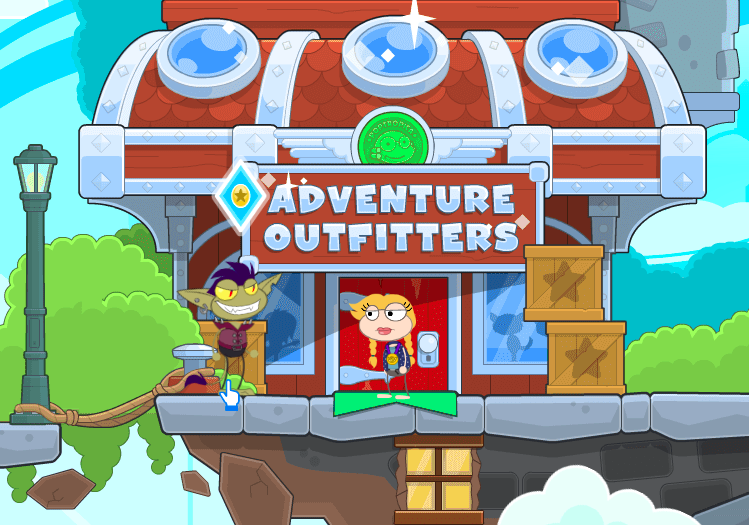 Thankfully for our “puny” Poptropican brains, the magic man’s gracious enough to write down t the riddles leading to the King. With a burst of his signature puff of purple smoke, Rumpel’s disappeared in thin air and we can begin the adventure. 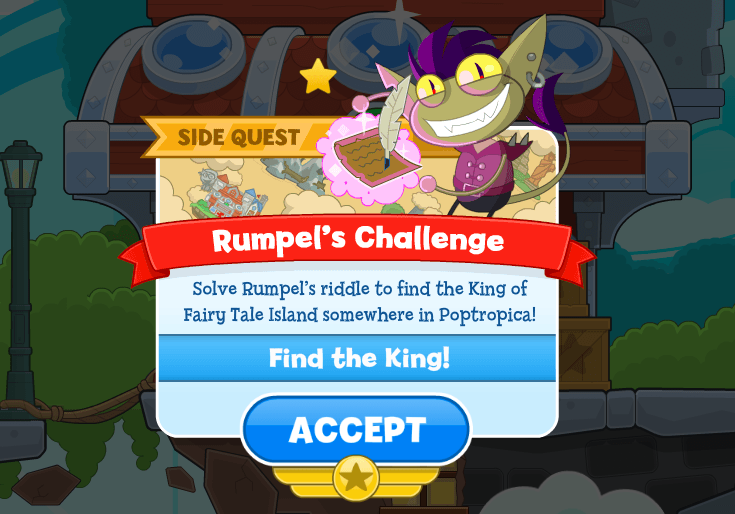 Examine the first riddle in your sidebar’s quest tab to get started! 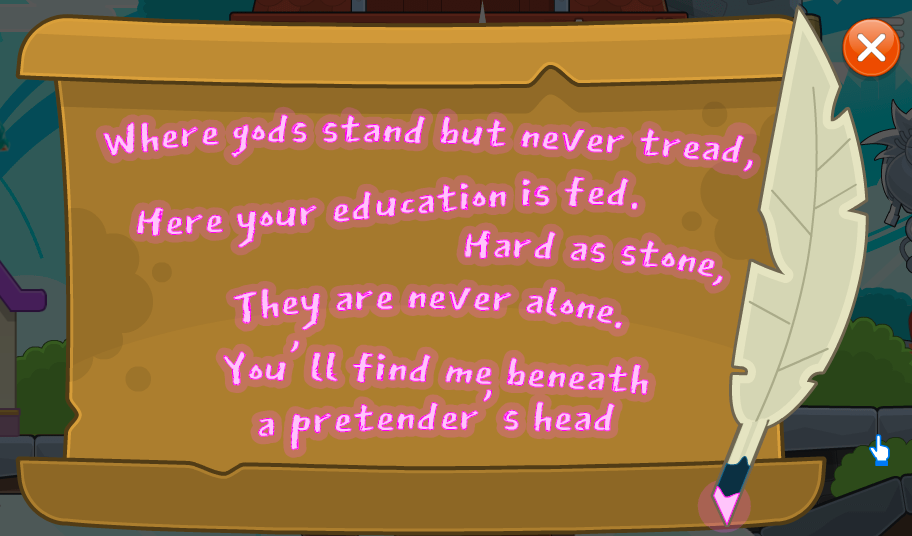 Where gods stand…” the next destination must be on Mythology Island! Use the map to travel to Ancient Greece to search “beneath a pretender’s head.” Hmm, who do we know Mythology that might fit that description?

After arriving to the next island, consider the lines “here your education is fed” and “hard as stone…” The Museum of Olympus fits the riddle’s clues – the Greek gods’ and goddesses’ statues are housed inside. Enter the Museum and sure enough, you’ve found the second riddle under Zeus’ statue. 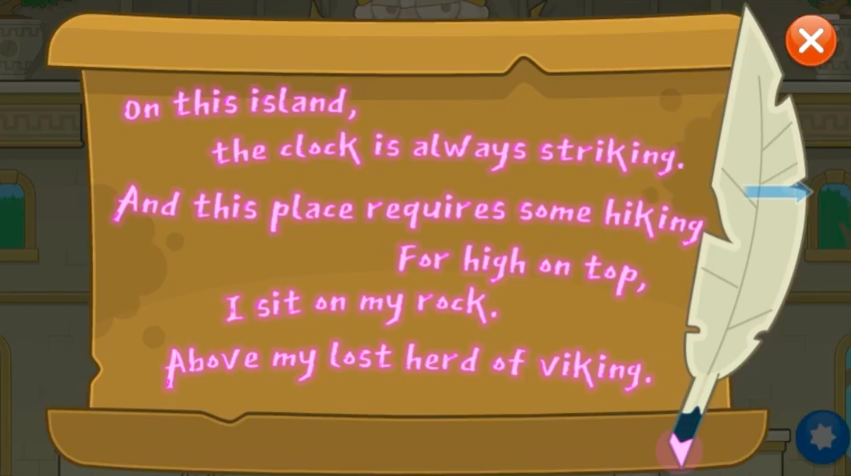 The next riddle offers further clues to the next destination. If you’re familiar with the islands, this one should be relatively easy! “The clock is always striking” refers to Time Tangled island! But the unknown era on Time Tangled is the harder question. Let’s check out the time device options to see where we should travel. Rumpel’s hints the next leg of the challenge is located “above my lost herd of viking” – and sure enough, the Vikings are represented on the time device’s watchface. At Rumpel’s recommendation, take a hike above the Viking herd near the cave to find the next clue! 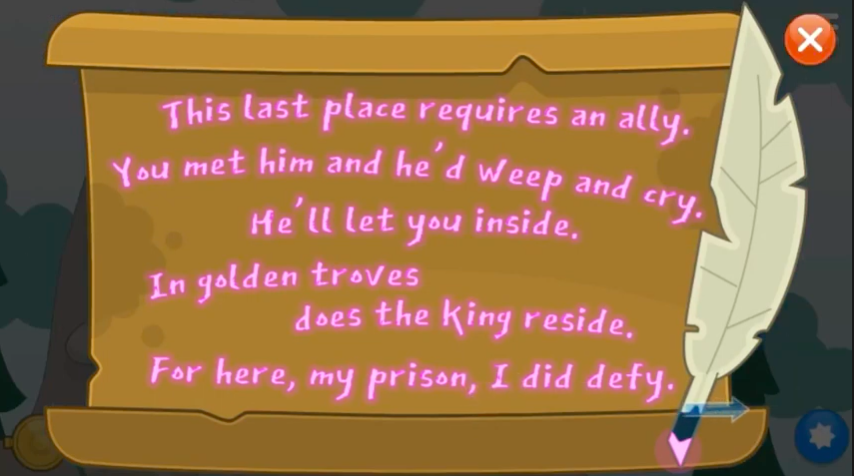 Finally, it seems we’ve come across the last riddle. Who have we met that’s notorious for his weeping and crying? The Fairytale Prince, of course! Use the map to travel to Fairytale Island and up to the crying royal on the palace’s steps. He’s overjoyed by Rumpel’s “pretty bad poem” and the prospect of finding his missing father. The Prince suspects that the room housing “golden troves” is the treasury!

Side by side, you and the Prince must descend into the depths of the treasury, making sure to use the levers to unlock the gates blocking your path. As you navigate the golden troves, you might notice Rumpel’s back to his usual mind games. Look closely at the statues you pass – the figures’ heads are replaced by Rumpelstiltskin’s smirking face.

of visitors touching his gold. Try to keep both you and the Prince from touching the dragon’s spoils, or the Prince will run away when the dragon wakes up.

On the lowest floors of the treasury, you can see the King! He’s imprisoned in a cell, protected by electrified panels. The Prince’s reunion with his father is too much for him; he can’t help but cry! Surprisingly, the young royal’s tears damage the electrified panels, overriding the system’s locking mechanism. Several cell doors swing open. That’s it! Who would’ve thought that the Prince’s vulnerability would be the very thing to save his father?! 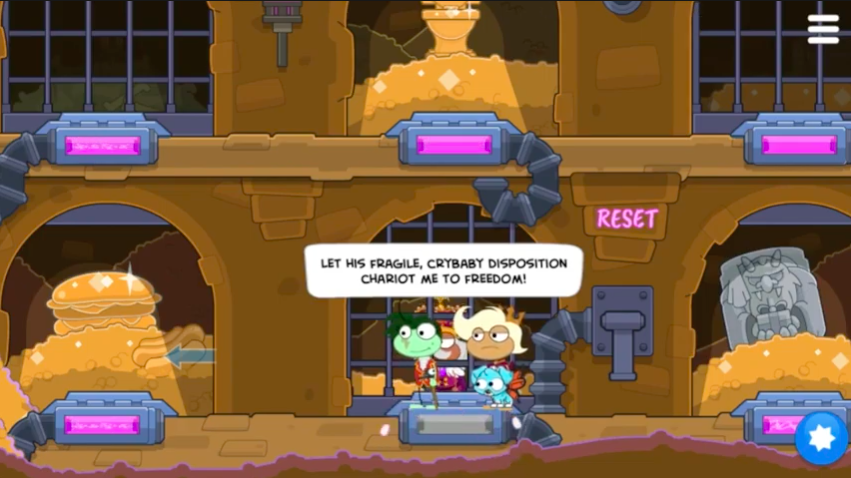 Click on the Prince above the panels to insult and make him cry! Move the Prince around the panels until you find the right combination to release the jailed King. It seems Rumpel’s left one last riddle to aid our efforts. The walls read, “Two are shocking, four are not. In a column, or he’ll stay caught.” There are several different combinations you can use to manipulate the security system. With Rumpel’s last riddle in mind, you can make the Prince cry over both levels’ panels on the left and right sides. Alternatively, making the Prince cry over the upper and lower middle panels is just as effective. What other combinations have you found that unlock the King’s cell?

After the Prince’s tears force the system to malfunction, the two royals are finally reunited! But their celebration is short lived. The King warns of a rumor Rumpel delivered just before he disappeared. The Queen, the Prince’s mother, is returning to Fairytale Island. Both men simultaneously burst into tears and flee the treasury. What would make them react so poorly?!

Congratulations! You saved the day! Upon completing Rumpel’s Challenge, you’re rewarded with 2,000 credits and left with one final clue – Rumpel shall return.

Whew! What did you think about Rumpel’s Challenge? Did you use a different combination of broken panels to breach the security system? And why on earth would the King and Prince be terrified by the Queen’s return? Only time will tell!

Bonus Question: How many statues did you see Rumpel’s head temporarily replace? Mischevious should be the magic man’s middle name…

You guys forgot the halloween countdown

Guys, let's not stop complaining about the old stuff until they bring them back. Invisible Ring's movie inspired me, not to rebuild the fandom's attitude, but to actually bring the original Poptropica back! We've got to take action!

what are we actually gonna do. Whine in the comments? Has that worked, so far?
As far as I know, "complaining about the old stuff" does less than build a generally negative attitude.
Want them to talk to you? Send them an email(not hate mail, a respectful one). Try to throw ideas at them where they'll listen, and where they'll respond. Remember that actions speak louder than (complaints) words.

This wasn't a choice they wanted to make, it was a choice they had to make. The old islands were removed due to the death of flash.

yes. although the old islands were fun, they are putting out new things. there wouldn't be any costume contests and the baron if poptropica was still old poptropica.

Ever think Poptropica was BETTER in the old days?! Jeez. You guys just don’t understand

Will the side quest become available to non-members?

Wow! Another great side quest. But some questions remain... Is the Queen evil? Possibly working with Rumpel? So many questions! Thank you, Poptropica for keeping us on our toes!

Is the Rumpelstiltskin side quest open to non-members now?

My prince keeps saying "where's my real dad?" , even though I got the final rumpled clue. I tried replaying the fairytale island and it still is not allowing my character to say "I've found a clue that could lead us to your father". Help, what do I do?

Sorry about that! Please report the issue through the Contact Us page and we can help ya out!