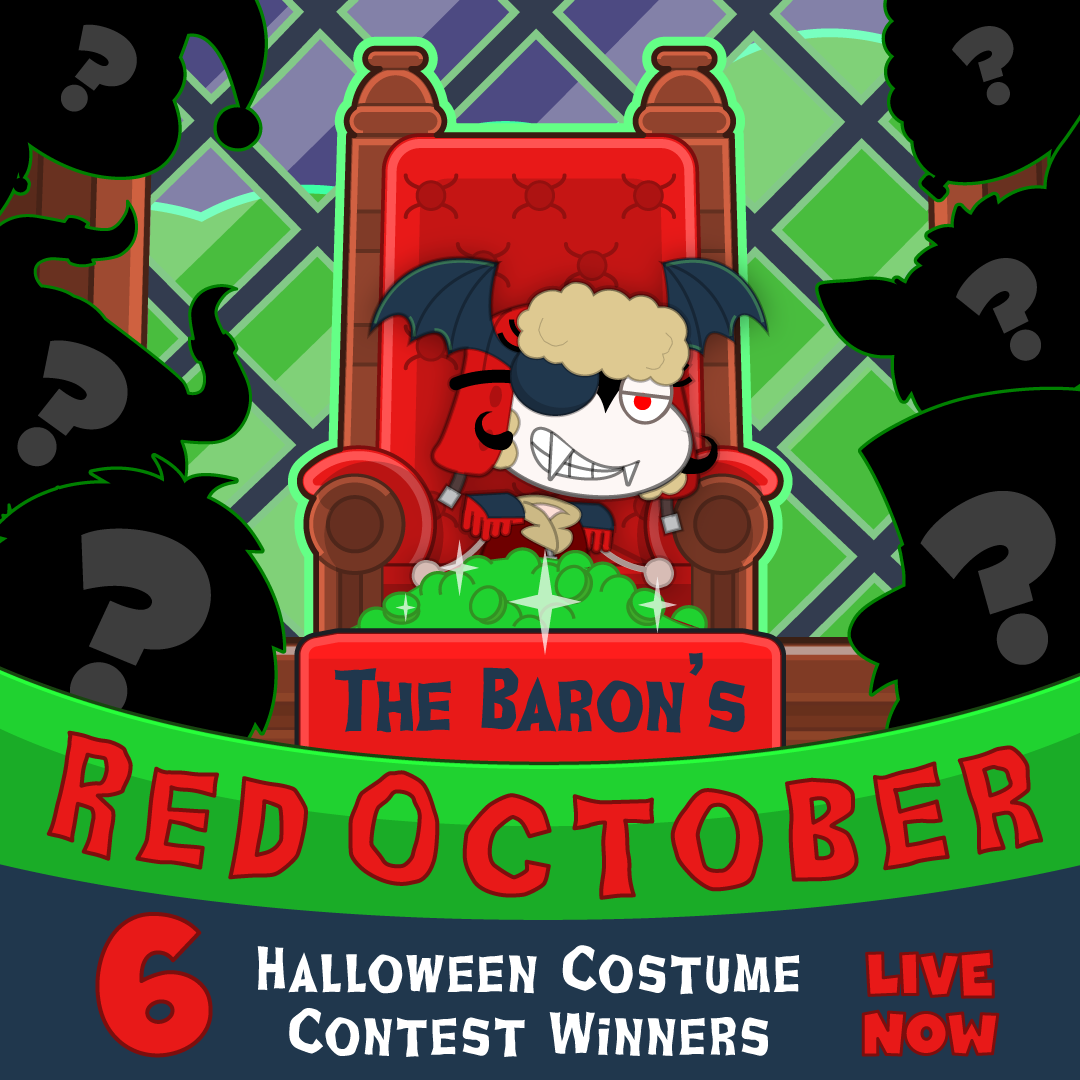 Happy Red October, Poptropicans! 🎉 The Baron has begun her Halloween takeover of Home Island! The island is covered in thrilling decorations for the special occasion – it’s Baron-ly recognizable! Pop into Mainstreet to see for yourself! 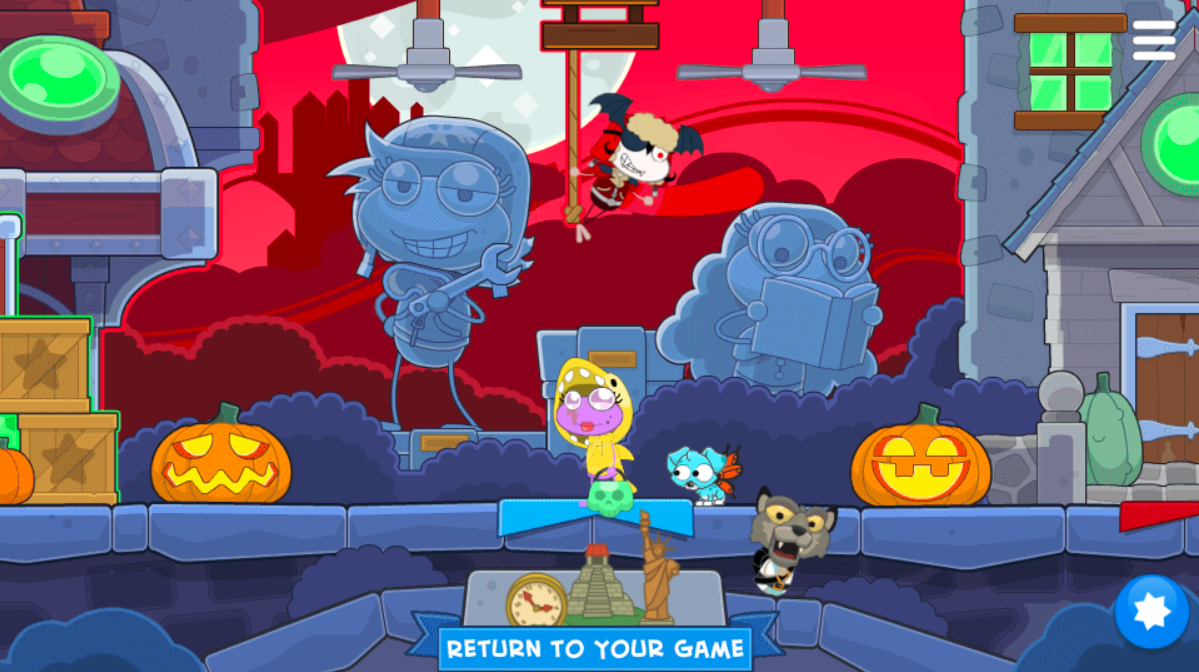 How do you think Amelia’s adjusting to the sky pirate’s changes? 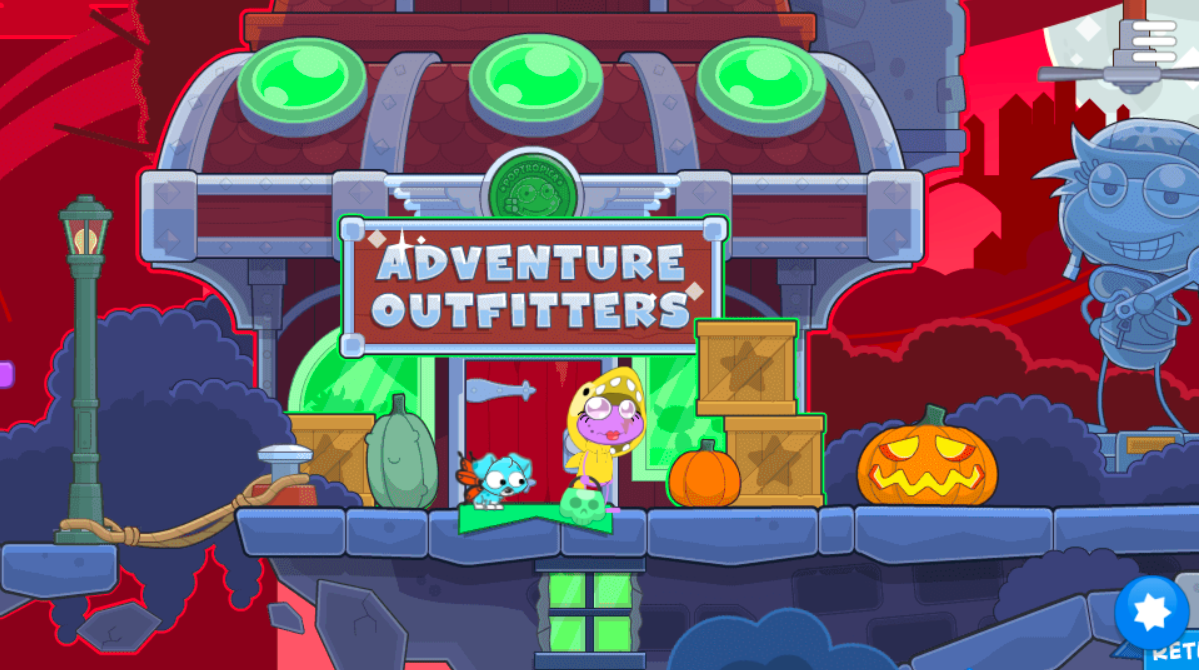 The Baron’s reappearance and sudden redecorating isn’t the only thing she has in store for you! Climb aboard the airship and visit the Cabin of Curiosities to find the Baron’s special Halloween goodies! 🍭 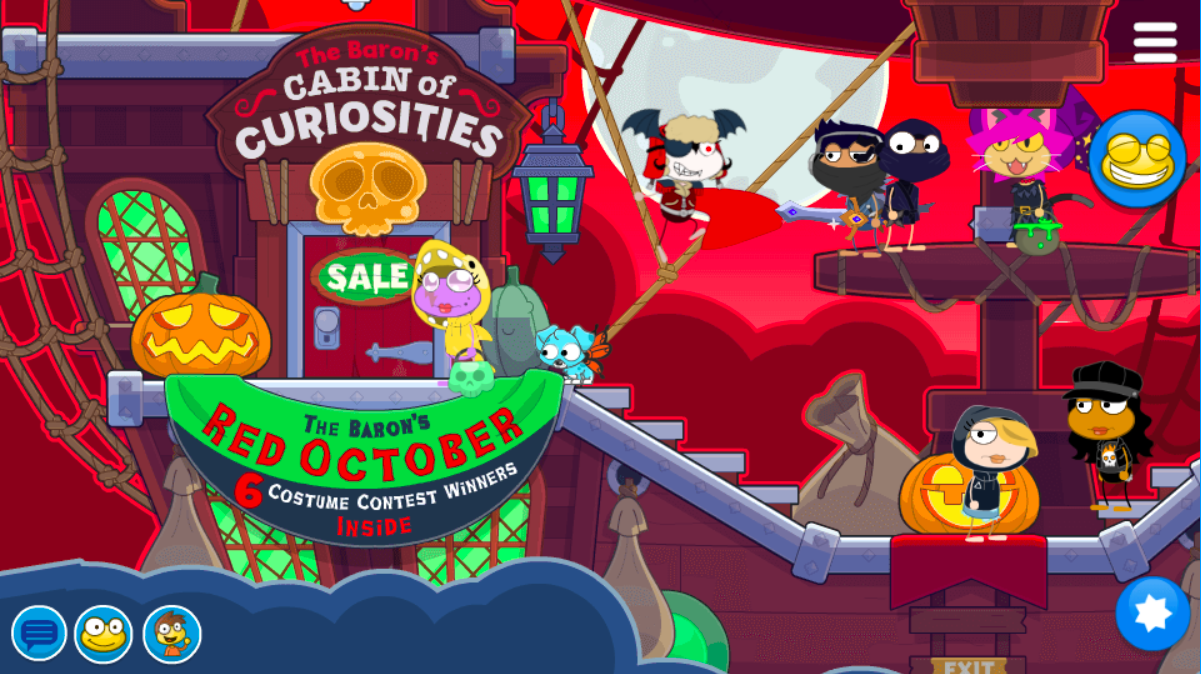 As always, the Baron has brought along some rewards that will be sure to give ya pumpkin to talk about. All Poptropicans have the chance to get the 6 winning costumes from the Baron’s Red October costume contest – all for FREEEEE! Yep, you heard that right. The Baron is offering SIX FREE COSTUMES for all players in the Cabin of Curiosities! Stop by the Airship’s pop up shop to add the Heart Witch, Pumpkin Punk, Will-O’-Wisp, Zombie Nerd, Midnight Kitten, and the Phantom costumes to your wardrobe! They’re to die for! 💀 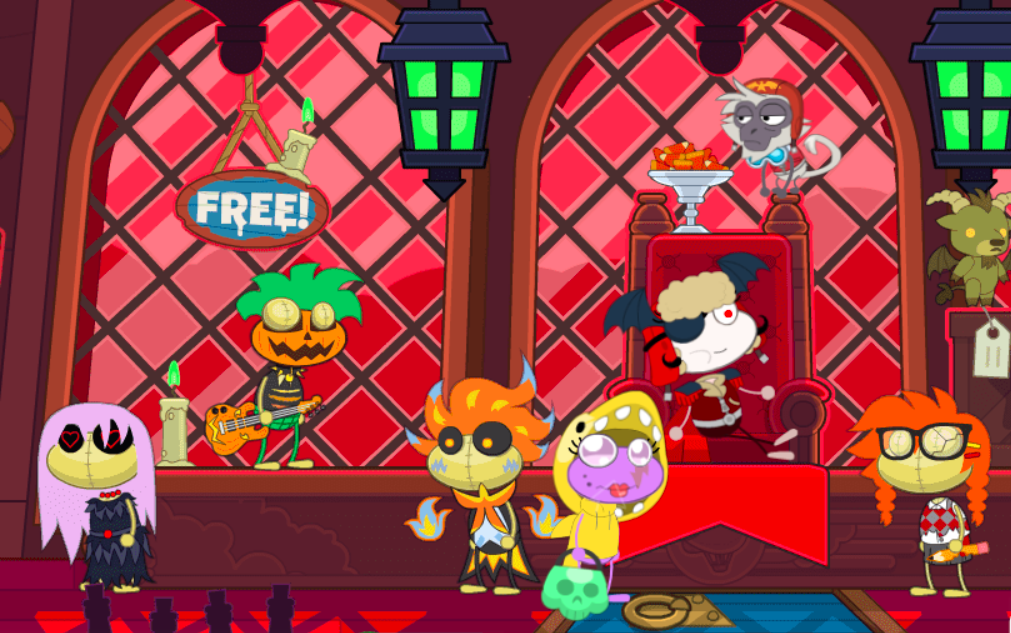 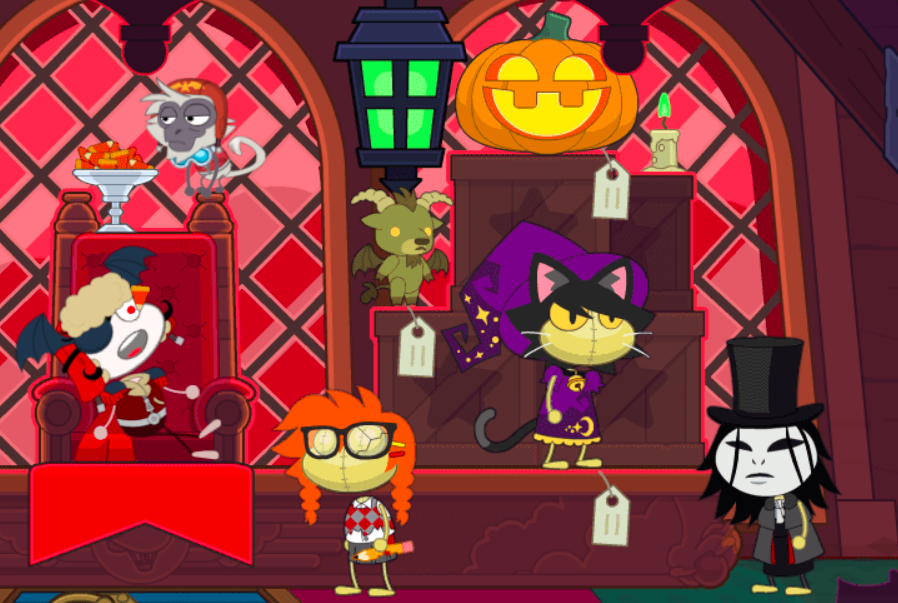 Trick-o-treat yourself to a new look (or 6)!

The Cabin also features the winners’ original costume submissions! Once again, let’s give a hand to the artists behind the costumes. Congratulations to Big Rider and the Heart Witch, Gentle Dolphin for Pumpkin Punk, Sleepy Biker and Will-O’-Wisp, Cheerful Boot for Zombie Nerd, Quiet Crumb and their Midnight Kitten, and last but certainly not least, Maroon Cloud for their Phantom design! Don’t forget to check out your fellow Poptropicans artwork before you leave the Cabin! 👀 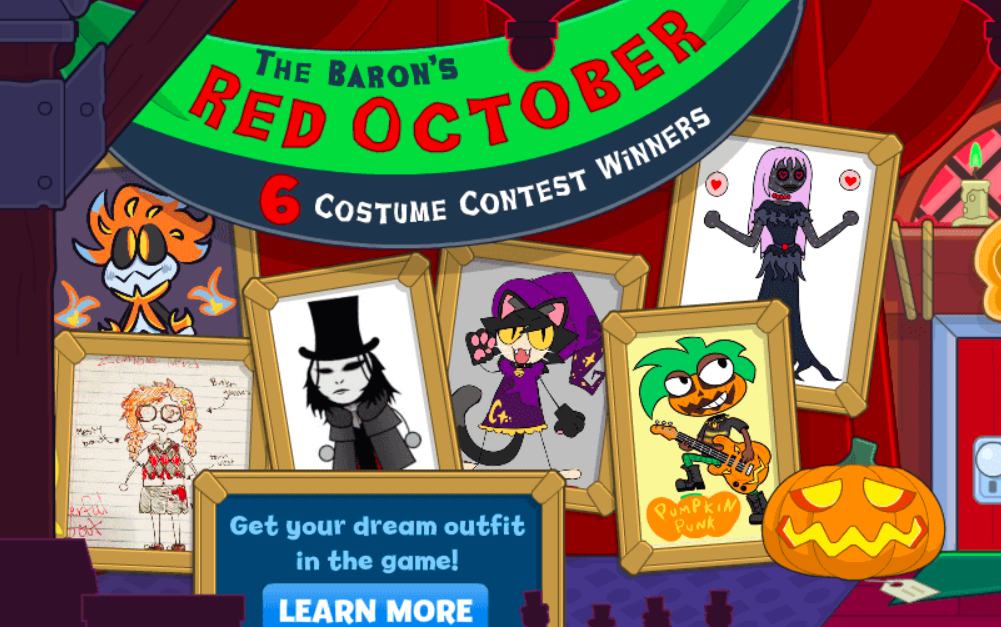 You can also buy two different pumpkin decorations in the Cabin! One of the pumpkins is smiling while the other is grimacing, but for 50 credits each, you can't go wrong!

While you’re on the Airship, you can play the Baron’s flying mini game to earn extra credits for the Halloween costumes available in Amelia’s store on Home Island. Not only that, the deck also functions as a common room! Interact and friend other players, invite Poptropicans from your friends’ list to a private party room, and use the chat and emotion features to play with other Poptropicans in real time. Or, if you need any costume inspiration, you can take a peek at the other players’ costumes to get some new ideas for your Popsona’s outfit! 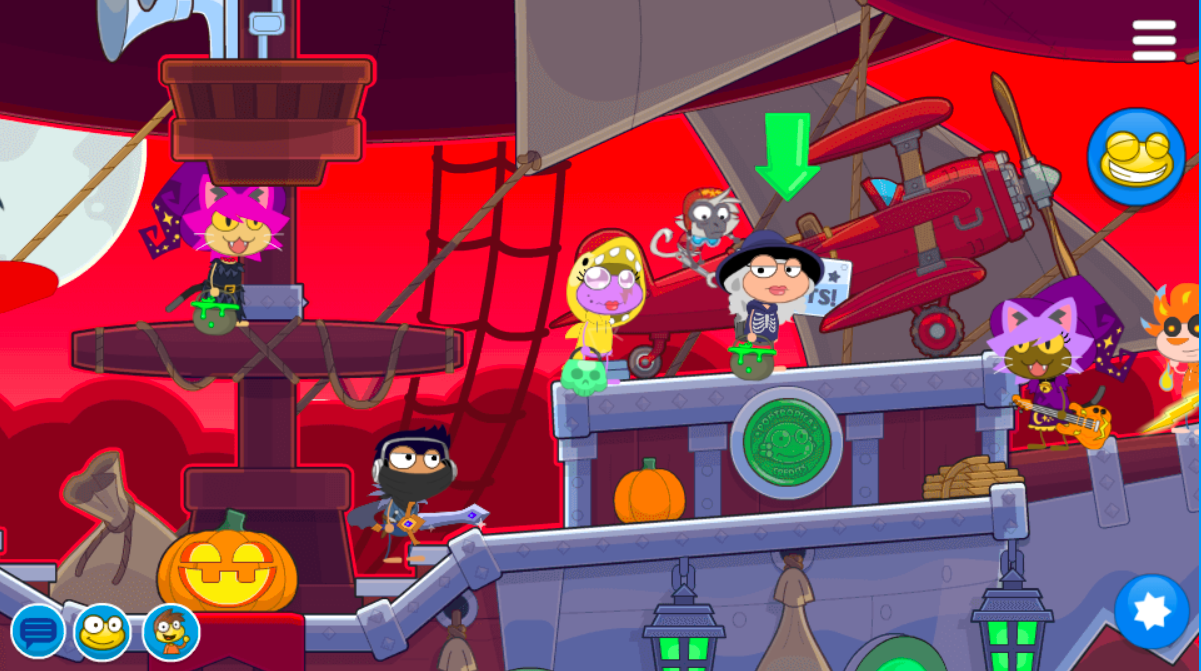 The Baron will be docked on Home Island for the ENTIRETY OF RED OCTOBER! Get used to painting the town red! Share your love for the Baron’s Red October takeover in the comments! What are your favorite fa-boo-lous looks from the Baron’s exclusive Halloween costume collection?! Have any ideas about how you’re going to customize them to fit your style? 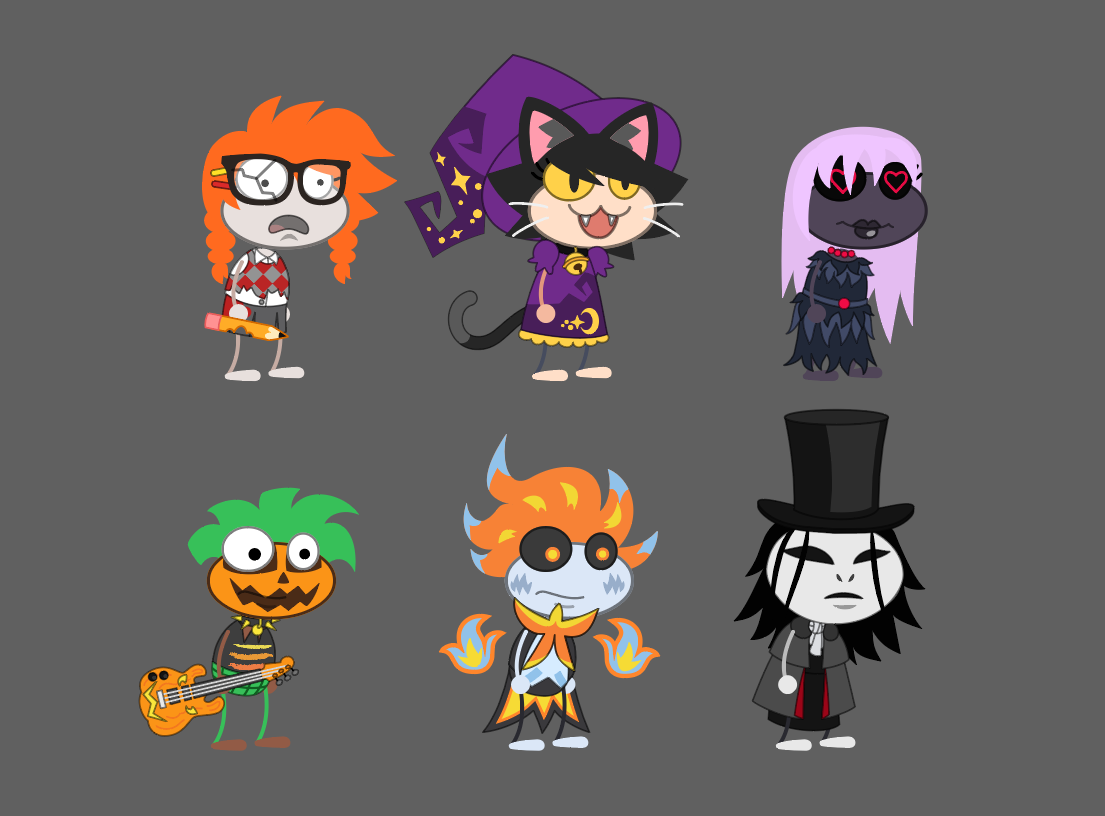 Thats nice, speaking of Halloween, could we also have a few old minigames like haunted house?
Or maybe the old islands will come back.
Thankyou

The outfits came out great! Sadly for the Heart witch's outfit I can't wear the belt.

I'm so happy thank you Poptropica! These came out great!

I need help with clubhouse items. for some reason every time I go into my clubhouse I see a giant red box hovering above an item. if the move the item, the box follows, if you hover your mouse over it,it says "EXIT". do you think you can fix it?

Sorry about that, Squeezy Slice! Please Contact Us about the problem you're experiencing and we can help you out!

I can't. There is no clubhouse category in the player help.

also, I have another problem. I removed a couch from the house and when I tried to put it back the couch was magicly erased from my inventory entirely. do you think you can fix it? yeah I've been having a lot of problems with the club house lately and I can't put it in Poptropica player help.

For some reason, I can’t find my sir cador costume either.
It is an old one though, about from five years ago but it disappeared around the start of this year.
It’s understandable if you can’t get it back though.
This would be a great time to bring back Ghost Story, Vampires Curse or even Monster Carnival.

I love Red October! By the way, will you be bringing back the fall fair?

Aww really wanted to wear the cat paws and belt

(formerly Quiet Crumb) yeah, its a little upsetting that they couldnt fit in the cat paws, but i guess i was asking too much though. the rest of the costume looks amazing though! they did a great job at putting my design in the game!!!

Too bad the one quest the Red Baroness appeared in was removed.

Could you add Stranger Things costumes in the store for halloween? it would mean a lot to me.

Can you please put the old islands back to the map? I never got chance to play them like Zomberry island or early poptropica? Sincerely POPtropica fan Player

It's so exiting to see my outfit in game! Thank you guys!