Hello Poptropicans! Pop HQ has been hustling and bustling lately! We have a few special projects in the works that we’ve been anxiously awaiting the green light to share with you! And finally, it’s go time.

The new character screen will allow you to mix and match individual costume elements from any costume! The new character screen takes things to a whole other level. You can choose any of your costumes from your item inventory and select the desired features you’d like your Popsona to wear! Want to wear the hairstyle from one costume, a shirt from another, and the accessories from a third? Piece of cake. 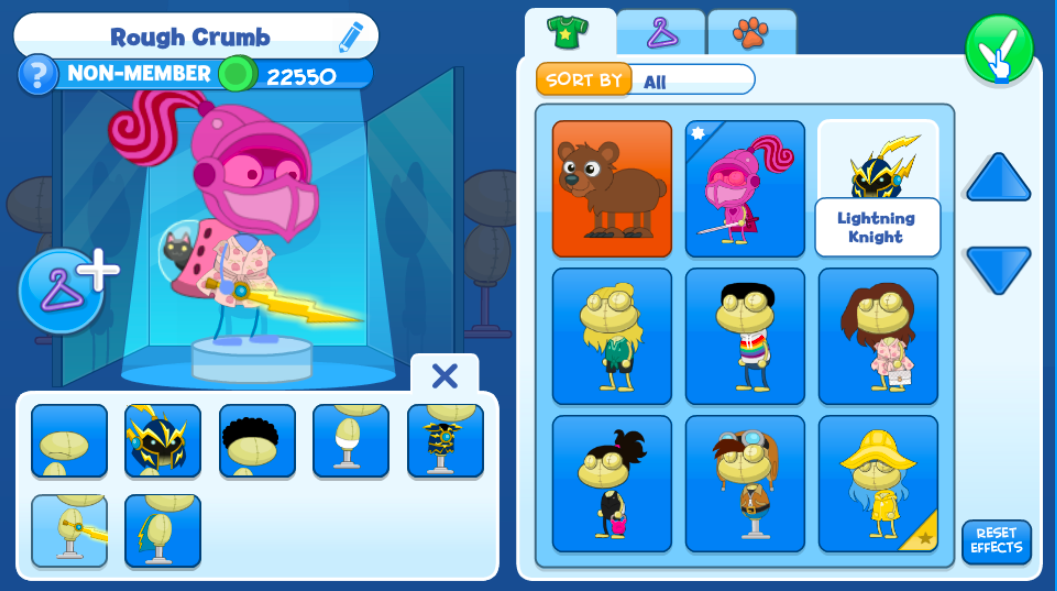 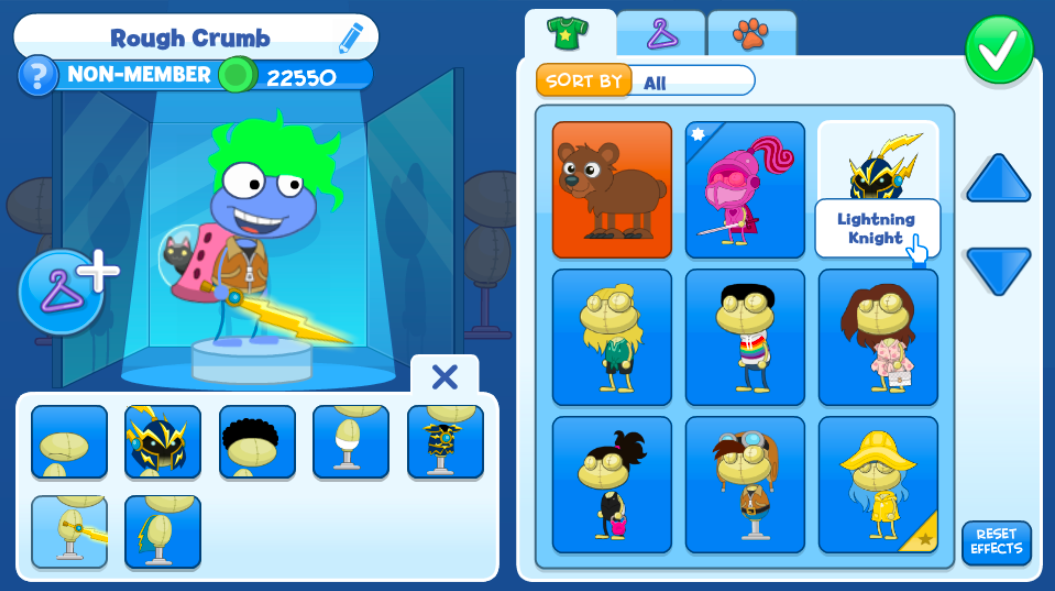 But the best part might be the skin and hair modifier! Choose any color on the rainbow for your hair and skin colors! You can coordinate your Popsona’s look with your appearance irl or even to match your mood. Change your appearance at the pop of a hat and orchestrate a costume combination for any occasion! 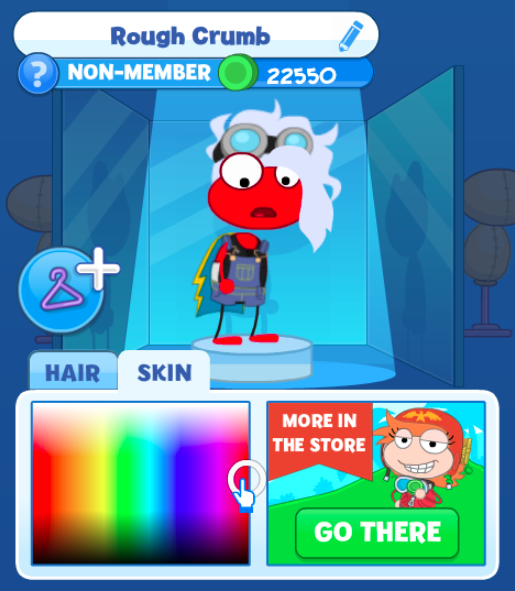 Try the color selector on your pets as well! Pair your pet friends with their own adorable costume. Ever wonder what it'd be like to have a purple or neon yellow pet? They deserve to be pampered too. 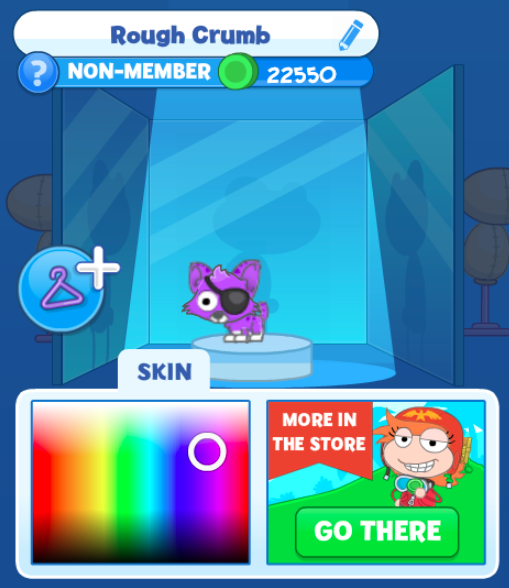 On a similar note, we’ve been seeing a lot of messages and comments asking about the old costumizer feature. The costumizer was removed because we were receiving many complaints about the feature. Older players had to spend the credits to purchase a costume or they may have had a discontinued outfit from the early days that is unavailable in the store. Meanwhile, a new player would be able to instantly copy and wear the same items from any older profile, sidestepping the other player’s efforts.  Although the costumizer will not be returning to Poptropica, the upcoming unveiling of the new character screen enhances flexibility and creativity, while ensuring fairness to all players.

Keep an eye out for the launch of the new character screen TOMORROW, Poptropicans! As a reminder, June’s Monthly Costume Contest ends tonight at 8pm PST. Your costume design can be one of the first player costumes that can be customized with the character screen!

Are you keen on the previously unseen character screen?! Let us know in the comments 👇

WHAT IN THE WORLD!!! THIS IS WHAT I'VE BEEN WAITING FOR SINCE I STARTED POPTROPICA BACK IN 2007!!!! THANK YOU GUYSSSS :DDDDDD SO EXCITEDDDD

I agree with the costumizer feature. Boy was it annoying for me LOL

Excuse me, that's no reason to remove the costumizer.

Yes, it is. No one likes a copycat. Or their outfits being stolen.

Yeah, you cant copy store items from people, the pop devs dont even know what they are doing.

This is super cool! Really excited about this.

I think I'm speaking for all the og fans here when I say we want the costumizer back. One of the best parts of the early game was being able to costumize off NPCs and other players, and it was unexpected and tragic that it was removed. Store outfits and many unobtainables were never costumizable in the first place, and the squabbling over rare parts ended years ago. If it wouldn't be possible to make the costumizer available everywhere again, please reconsider re-adding it to the other islands, but still disabling it in common rooms and clubhouses for fairness.

literalllllyyyy I agree because they took my whole outfit now, I look basic

I agree!! I'm an OG player and the customizer option was my favourite for the npc characters - helped me get into the gameplay a lot more by looking like I belonged in that world. I 100% agree to remove the option for other player's to honour purchases!

If you guys are worried about fairness, then make all the outfits free and keep the customizer.

It used to be that when you complete a side quest, you get an outfit (or item). The side quests had nothing to do with whether or not you completed the island, but they were still fun to play. You could release the new costumes and outfits this way. It would be fair to everyone, since it would be based on simply completing the side quests in the islands.

Why are you guys acting like the colorizer is a new thing? Did you forget writing a post about it back in 2019??

Here’s a little bit more about the colorizer, which it seems you forgot about:
https://poptropica.fandom.com/wiki/Colorizer

They're just excited because they're bringing it BACK, not introducing it. So are we.

They created Poptropica, they wouldn't "forget".

The colorizer was previously included in the customizer a few years back, but has just been rereleased as a part of the character screen after time off of Poptropica!

Um, Little Ghost, although I wish that were true, Poptropica actually forgot about Betty Jetty one time.

Admittedly, the Betty Jetty comment was an honest mistake. But, it did happen. Regardless, my apologies to the community for the confusion. 🥺

THEY BROUGHT BACK THE COLORIZER! This, by far, is the greatest update Pop has made in forever. Thank you, creators, and I hope that anyone who has doubted the Pop Developers before has been made into a believer.

Oh... my gosh. I just checked out the new character menu today and I am AMAZED! Many people say that everything amazes me, but I say this is literally the best update EVER! I can finally access everything I have. EVERYTHING! Our prizes and member gifts are finally filtered, and everything that was formally in the New You shop and Pet Barn is ALL fused into one ultimate menu now. I LOVE IT! Thank you, Poptropica! You're really coming through and you're doing GREAT!

This mean poptropicon is gone doesn’t it?

Same here! It feels like they’re not really listening to the whole community...

Honestly the costumizer was never an issue, most of the part stealing was a meme and stopped a while ago. Many og players want it back, and we hope that you do reconsider your decision. If not, please add back the costumizer to islands only so that people will still be able to obtain parts from island characters, but not from other players.

It never stopped for me until it was taken away. FYI guys, some comments may appear later than others, it's not their fault. Also, negative comments are, if you think about it, less likely to be approved than positive ones.

The Colorizer is BACK baby!

That reason for removing the Costumizer makes no sense... not everything was costumizable to begin with! Each piece of clothing has a setting specified by the game developers indicating if it can be costumized. Clothing was costumes was *never* costumizable, because the developers knew to avoid the very issue that's being described. If that issue was actually occurring with clothing, the developers could have just edited the clothing's data to make it uncostumizable.

i don't understand why you would remove that costumizer. how are we going to customize from npc now? please put it back in the game. its already getting downhill...

It looks super nice! But it's glitchy. :( also it doesn't let me save my outfit either. So it needs some improvement. But, I love the format!

So this is great! But....not gonna lie I don't think the costumizer should be gone entirely. I get wanting to keep things fair for other players and not wanting people to steal other peoples outfits! But as an OG I loved getting the NPC's Outfits! Now we can't do that. So my solution is just make it so we cant copy OTHER PLAYERS outfits and make it so we can only get the npc's clothes! :) Please please make this a thing!!

It kinda bunk mates, I liked wearing somethign off an NPCs, plus sometimes some older players had costume items from old events you can`t get anymore. Even then there`s gona be at least 2 or 3 players with the exact same costume. I had many outfits in my closet. Also not related to the post I really don`t like how islands are now, Mythology is too easy now, where`s the challenge?

imma be honest this kinda upsets me because i just logged into the new pop and now there are no free outfits at all, and usually this wouldn't be a prob because you could just find fun outfits from npcs but now you cant even do that? now all the good outfits and hairstyles you can only got by being a member and that takes real life money, super disappointing.