Wimpy Kid Islands open through the weekend only! 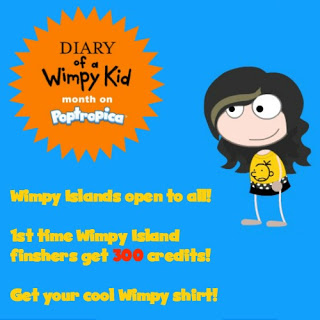 As my buddy Captain Crawfish blogged a couple weeks ago, April is Diary of a Wimpy Kid Month. So we've been celebrating on Poptropica by opening Wimpy Wonderland and Wimpy Boardwalk to everyone! But alas, Wimpy Kid Month is almost over and so is this promotion.

Before the weekend is over, be sure to play the Wimpy Kid Islands. First-time finishers get 300 credits for finishing each island. That's 600 credits total that you can earn. Think of all the cool stuff in the Poptropica Store that you could get!

Plus we're giving away a cool Wimpy Kid shirt for your Poptropican, like I'm modeling in the very bright image above.

Go play now on Poptropica -- the Wimpy Islands will be members-only again on Monday!